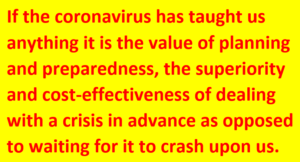 Were the midterms “pretty good for the climate-concerned,” as The Atlantic’s Robinson Meyer said in his election post-mortem? It would seem so, with the 40-seat “blue wave” ushering in Democratic control of the House and an opportunity to restore climate policy and facts to the political agenda. But for carbon taxes in particular? Maybe not so much.

Two contrasting carbon-tax varieties — “revenue-neutral” and “just transition” — were dealt serious beat-downs on Nov. 6. As CTC director Charles Komanoff reported in this space last month, only 20 of the 43 current Republican members of the Climate Solutions Caucus will be returning to Congress next month, an obliteration that dimmed prospects for bipartisan, “fee and dividend” carbon tax legislation. Among the fallen: Caucus-founder Carlos Curbelo (R-FL-25), who lost two percentage points to newcomer Debbie Mucarsel-Powell. 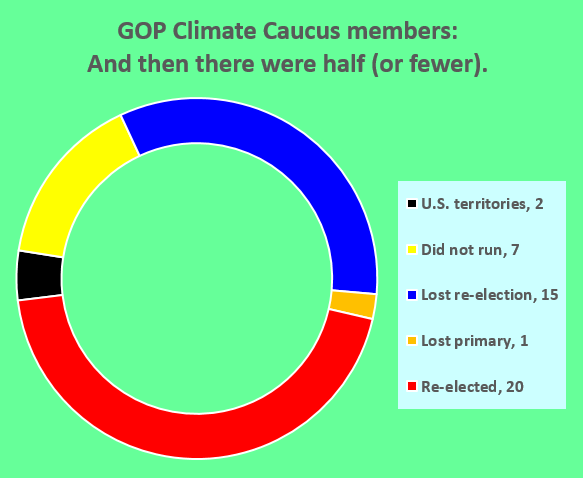 If this chart looks familiar, it’s because we’ve run it several times — that’s how startling it is.

Evidently, the mild climate concern expressed by the vanquished Republicans couldn’t inoculate them from voters determined to put Democrats in charge of the House. In Meyer’s telling, the Climate Solutions Caucus may simply have been inherently unstable. Republicans have to be at least somewhat centrist to want to join the caucus, but the purple districts that might elect centrist Republicans are going to be less secure for Republicans than hard-right districts.

At the same time, the similarly aligned Climate Leadership Council is rumored to be building a bipartisan push for its $40/ton “carbon dividend” bill sometime next year. So it may be too early to count out team revenue-neutral.

On the other end of the carbon tax advocacy spectrum, Washington state’s “just-transition”-oriented Initiative 1631, which would have funded a suite of measures for renewable energy, forest protection and worker transition, went down to defeat by a resounding 56%-44%. As a laboratory of democracy, Washington has now performed yeoman service for carbon tax watchers for three years running: the revenue-neutral Initiative 732 was defeated by an even wider margin (59-41) in 2016, and a legislative carbon tax earmarked to fund public schools failed in 2017. 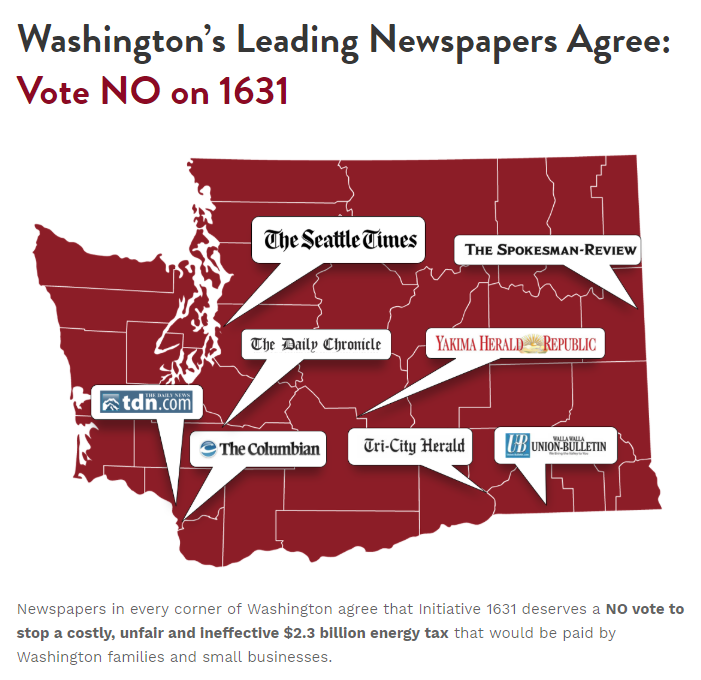 Big Oil’s $30 million helped sink WA state’s I-1631, but they had allies: editorial boards across the state.

Clearly, no carbon tax faction has yet earned any bragging rights. As reported here, I-1631 had widespread backing from environmental, civil rights and labor organizations, as well as heavy hitters such as Washington Gov. Jay Inslee, Bill Gates and Michael Bloomberg. No matter, that combination proved no match for massive opposition funding bestowed by mostly out-of-state fossil fuel interests, including $12 million from BP, a Climate Leadership Council founding member.

Nevertheless, the midterms are bound to make the overall political environment far more hospitable to climate concerns, as Meyer argues. The question now is how the ascendant Democrats will put their powers to use on climate issues more generally, not just carbon taxes.

Last month, not just the Blue Wave but wildfires, drought and other climate calamities held public attention in much of the U.S. A new generation of activists and incoming Congressmembers began demanding a full-press climate policy agenda that could be enacted once the Trump Administration and its climate-denying allies are put out to pasture.

Hopes were high that House Democrats would use their new position to advance a Green New Deal — the policy rubric prominently advocated by incoming Rep. Alexandria Ocasio-Cortez (D-NY) and the emerging Sunrise Movement (and that from its earliest conceptions has always included carbon taxation or other carbon pricing). Those hopes receded somewhat last week when their caucus formed a select committee on climate headed by Rep. Kathy Castor (D-FL-14), a 12-year member who hasn’t voiced support for a Green New Deal or any other climate policy idea. (There’s no mention of climate on Castor’s Wikipedia page.)

There also appears to be a growing sense that carbon taxes may belong to an older policy playbook from an earlier, more technocratic era. In that period, a carbon tax could be considered a premier policy tool favored by economists and other well-informed advocates across the political spectrum. Now it may need to take its place as one of an array of options on a newly broadened playing field.

If so, we carbon tax advocates will need to expand our horizons in our search for allies. Rather than “staying in our lane” in the climate change arena, we may need to join a broader discussion that includes issues of tax fairness, efficiency and income inequality. A New Yorker magazine profile of the Sunrise Movement this week notes that “like other activist movements of their generation, they see their cause as inseparable from the broader issues of economic and social inequality.”

Rather than just check the boxes on those issues — as carbon tax organizers did dutifully in both the 2016 and 2018 Washington state initiatives — in the new emergent period of progressive ascendancy we may need to commit our energies to these issues as fully as we do for carbon taxes. 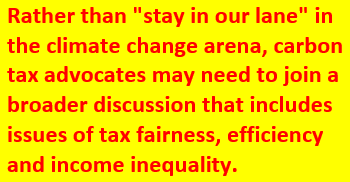 Indeed, it may have been precisely the failure to consider the broader social equity context that doomed France’s recent fossil fuel surcharge at the hands of the Yellow Vests — many of whom express climate concern and engagement but reject being made to bear the brunt of wonky policy measures while their economic betters glide by.

It’s a conundrum as old as environmental policy itself — to do its environmental work, a policy has to work economically but be accepted politically. By making common cause with advocates of economic fairness, as embodied in the Green New Deal movement, we carbon tax proponents may ultimately win a more secure position for carbon taxation than we have done to date.

Such a discussion needs to go beyond the polarized internecine debate among carbon tax proponents over whether such a tax should be revenue-neutral or used to fund new initiatives. It will need to extend into considerations of how the tax functions, whom it impacts as compared to other taxes already in use, and the many ways our society raises revenue for public purposes.

In other words, carbon tax advocacy may have to embody a sweeping re-consideration of current tax and fiscal policies, including an examination of whose interests those policies serve.

Andrew Ratzkin, an attorney and co-chair of the Hastings-on-Hudson Conservation Commission in New York’s Westchester County, is author of the report, Case for a New York Carbon Tax.