This page, featuring public officials, is one of half-a-dozen pages compiling expressions of support for carbon taxes (or more targeted taxes, e.g., on gasoline) by notable individuals and organizations. To access other pages with different supporter categories, click on the Progress link on the navigation bar and move to the desired category.

Carbon pricing is key. All firms across our economy need to pay the price of polluting the planet. It will certainly affect the economics of fracking and coal — the idea is to drive that stuff out of business over time. Maybe it doesn’t sound pleasant to say, but that’s what has to happen. (The 41 Things Biden Should Do First on Climate Change, Bloomberg Green, Nov. 11, 2020) 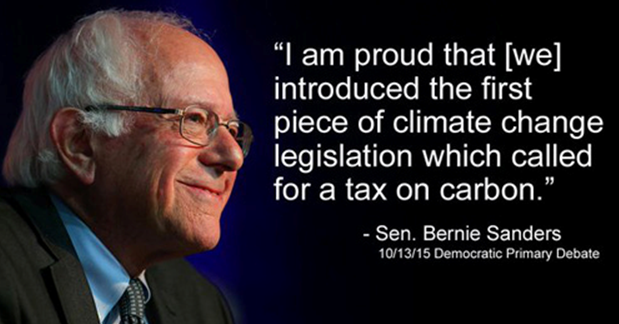 Senator Sanders introduced his Climate Protection and Justice Act last Dec. 9, just prior to the closing of the Paris Climate Summit. We discuss the bill here, but it has been in his presidential campaign that Sen. Sanders has put a carbon pollution tax on the political map, unabashedly championing the idea in the debates and criticizing former Secretary of State Hillary Clinton for not similarly making a carbon tax the centerpiece of her climate program.

In June 2016, Grist magazine posted a terrific campaign compendium, Our Favorite Bernie Sanders Moments, noting that Sanders called climate change the greatest threat to our national security and pulled Hillary Clinton to the left on climate and energy. Here are excerpts:

On taxing carbon: His climate change plan called for a carbon tax that will “tax polluters causing the climate crisis, and return billions of dollars to working families to ensure the fossil fuel companies don’t subject us to unfair rate hikes.” And it aimed for a 40 percent cut in emissions by 2030, compared to 1990 levels — a level of ambition on par with Europe’s.

On climate denial: “The reality is that the fossil fuel industry is to blame for much of the climate change skepticism in America,” Sanders says in his climate plan. In October, he joined those calling for the Department of Justice to investigate ExxonMobil’s climate obfuscation.

On Donald Trump’s climate denial: “How brilliant can you be?” mocked Sanders in front of a New Hampshire audience in January. “The entire scientific community has concluded that climate change is real and causing major problems, and Trump believes that it’s a hoax created by the Chinese. Surprised it wasn’t the Mexicans.” Trump, for his part, has a history of flip-flopping on climate.

On encountering a climate-denying teenager: “Thank you for your question. You’re wrong.”

On climate change as a security threat: In an October debate, Sanders said climate change was the greatest threat to U.S. national security: “The scientific community is telling us that if we do not address the global crisis of climate change, transform our energy system away from fossil fuel to sustainable energy, the planet that we’re going to be leaving our kids and our grandchildren may well not be habitable. That is a major crisis.” In a debate in November, Sanders said that “climate change is directly related to the growth of terrorism.” (PolitiFact later called out the causality here as Mostly False, but there are indeed some linkages between climate change and war.)

On the Paris climate agreement: “While this is a step forward it goes nowhere near far enough. The planet is in crisis. We need bold action in the very near future and this does not provide that,” said Sanders in December. Clinton’s campaign chair John Podesta later used this statement to argue that Sanders wanted to back out of the Paris Agreement.

On keeping it in the ground: In November, he cosponsored the Keep It in the Ground Act of 2015, which would halt new coal leases on public lands and prohibit drilling on the outer continental shelf.

Grist noted that in March, the Climate Hawks Vote PAC ran a survey asking which candidate it should it endorse, and Sanders got 92 percent of the vote. “We need clean-energy leadership in the White House,” wrote the group it its subsequent endorsement of Sanders. “We need a climate revolution.”

On Nov. 19, 2014, Senator Whitehouse, famous for his weekly floor speeches about the dangers of global warming, introduced the American Opportunity Carbon Fee Act which would impose a $42 per ton carbon tax, increasing annually at 2% above inflation. Senator Whitehouse’s price trajectory follows the Obama Administration’s central estimate of the “social cost of carbon,” the value of the harms caused by carbon pollution including falling agricultural productivity, damages to human health, and property losses from flooding.

The fee would be assessed on all coal, oil, and natural gas produced in or imported to the U.S. and also cover large emitters of non-carbon greenhouse gases and carbon dioxide from non-fossil-fuel sources.

All revenue generated by the carbon pollution fee – which could exceed $2 trillion over ten years – would be credited to an American Opportunity Fund to be returned to the American people.  Possible uses include:

Senator Whitehouse spoke at length about this legislation on the Senate floor in introducing it. Video of his remarks can be seen here, and text is available here. Senator Whitehouse re-introduced an updated version of his proposal in May 2015, which raises the initial tax level slightly, to $45 per ton of CO2.

Rep. John B. Larson, an 8th-term representative from Hartford, introduced his American Energy Security Trust Fund Act in August 2008 with twelve co-sponsors. His bill would impose an upstream tax on emissions of carbon dioxide of $15/ton with the level increasing by at least $10/ton annually. CTC estimates this trajectory would reduce U.S. CO2 emissions by 1/3 within a decade. Larson proposes a tax shift, using carbon tax revenue primarily to rebate payroll taxes.  Here is CTC’s commentary on the Larson bill and here is the bill.  Larson sponsored and kicked off CTC’s 2008 House briefing on Carbon Taxes.

Mr. Shultz, U.S. Secretary of Labor under Pres. Nixon (1969-70), Treasury Secretary under Presidents Nixon and Ford (1972-74), and Secretary of State under Pres. Reagan (1982-89), a consummate member of the Washington establishment, co-chairs a task force at Stanford that is urging Republicans to support a carbon tax. (See Stanford’s George Shultz on energy: It’s personal, Stanford Report, July 2012).

Following is an excerpt from his op-ed, How to Gain a Climate Consensus, in the Washington Post, Sept. 5, 2007:

The use of economic incentives (caps and trading rights, and carbon taxes) is essential to avoid disastrously high costs of control. The cap-and-trade system has been highly successful in reducing sulfur dioxide emissions by electricity utilities in the United States. That system relies on a scientifically valid and accepted emission-measurement system used by a clearly identified and homogeneous set of utilities. Fortunately, such a careful system of measurement exists for a viable greenhouse gas regimen. The product of collaboration between the World Resources Institute and the World Business Council for Sustainable Development, these standards for accounting and reporting greenhouse gases should be duly understood and adopted. Even with clear units of account, however, large problems arise as the coverage and heterogeneity of the system grow. And for trading across borders, the system needs to be accepted among the trading partners. Scams are easy to imagine. No nation should be allowed to trade without a verifiable, transparent system of measuring and monitoring of reductions, and holding emitters accountable. In many respects, a straight-out carbon tax is simpler and likelier to produce the desired result. If the tax were offset by cuts elsewhere to make it revenue-neutral, acceptability would be enhanced.

Click here for links to the many pro-carbon tax articles and blog posts by President George W. Bush’s chief economic adviser, 2003-2005.  Mankiw, who teaches at Harvard, is the convener of the “Pigou Club” which he describes as an elite group of of economists and pundits who support taxing pollution instead of productive activity.

Lawrence Lindsey, former Director of the National Economic Council  and Assistant to the President on Economic Policy under President George W. Bush

Recommending permanent tax cuts, Mr. Lindsey also recommends a “greenhouse emissions tax” as the source of funding. “Longer term, however, spending cuts or a new source of revenue would be needed. Given the agenda of the incoming administration, the best source of such funds would be a greenhouse emissions tax.” (From Lawrence Lindsey Joins the Schumpeter Club, Capital Commerce, in U.S. News & World Report, December 30, 2008.)

According to Grist Magazine, Ruckelhaus favors a carbon tax over cap-and-trade, since a carbon tax like cap-and-trade would rely upon market forces to determine where reductions should occur, but government administration would be much simpler. “It has the desired effect … It moves consumption toward less carbon-intensive activities. It does everything a cap-and-trade system does, but it’s about ten times simpler. And about one-tenth as popular, which is why we don’t have it.” (Obama’s Preferred Bill: EPA’s first administrator is bullish on Obama, but not cap-and-trade, Grist, December 29, 2008.)