Revenue-Neutrality Rises from the Dead

The Deutch bill sets an initial tax rate of $15/metric ton, rising by $10/tonne annually thereafter. The increase rate would rise to $15/tonne if annual emissions targets are not met. All of the revenue, net of expenses, would go toward equalized dividends to all American households, based on household size, making the overall proposal revenue-neutral.

H.R. 7173 includes a border adjustment for both imports and exports, to protect the competitiveness of American manufacturing. And it restricts the government’s powers to regulate greenhouse gas emissions, at least for their impact on global warming — a limitation that may be more symbolic than substantive, given the modest emissions impact of President Obama’s signature Clean Power Plan, especially when compared to likely reductions from the new bill’s steep price trajectory. 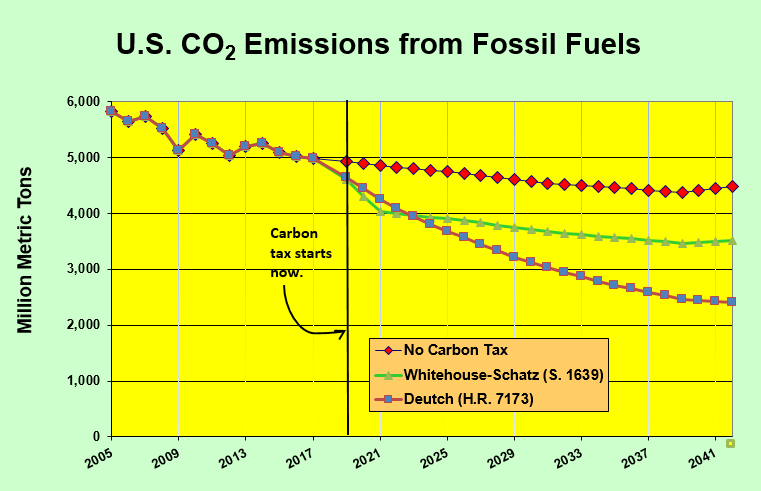 The Deutch fee-and-dividend bill would surpass the most aggressive recent Democratic carbon tax after five years and would have twice the impact soon after.

The buzz thus far has focused on the bill’s initial cosponsors, two of whom are Republicans: Brian Fitzpatrick (R-PA) and Francis Rooney (R-FL). This is not their first trip to the rodeo. Both also cosponsored a much weaker carbon tax bill introduced in July by Carlos Curbelo, who lost his bid for reelection. A third Republican, Dave Trott (R-MI), has since signed on. The two Democratic cosponsors are Charlie Crist (D-FL) and John Delaney (D-MD).

It’s important not to make too much of the bipartisanship on display here. Fitzpatrick, Rooney, and Trott represent an underwhelming 1.5% of the incoming Republican caucus in the House. More particularly, they constitute a mere one-seventh of the surviving Republican members of the all-too-quiescent Climate Solutions Caucus, which is losing most of its GOP contingent to defeat or retirement. Deutch and Curbelo were the founding chairs of the Caucus.

The larger substantive story here is the long-term impact of the Deutch proposal. His $15/tonne starting tax rate is lower than other bills introduced in this session, which range from $24/tonne (Curbelo) to $49/tonne (two Democratic proposals, S. 1639 and H.R. 4209). But the rates in those bills would generally rise by only 2% above inflation annually. Deutch’s proposal, though it starts from a lower base, would outstrip them in impact after just five years, with the differential only widening over time.

According to the Carbon Tax Center spreadsheet model, Deutch’s bill would reduce U.S. CO2 emissions below 2017 levels by 35% in a decade. The best of the Democratic proposals would see a smaller reduction of 25%.

The chances of any carbon tax bill passing in the next Congressional session are close to nil. It is hard to imagine such a proposal getting a floor vote in a chamber led by Sen. Mitchell McConnell (R-Coal Country, aka Kentucky). Even if it did, the veto pen of Donald Trump awaits. Nevertheless, the next two years will allow a debate within the Democratic Party over what its position will be on climate change in the 2020 campaign and, assuming that election goes well for them, in the 2021-22 Congressional session.

The Deutch bill is clearly a contender in that debate. And the more Republican cosponsors Deutch and CCL can recruit this session, the more likely it can become that a robust carbon tax, with revenues going back to American households, will be at least part of the answer.

The other major contender for a Democratic climate program right now is the as-yet-unspecified Green New Deal with major green infrastructure investments possibly funded by a carbon tax. Interestingly, the carbon tax bill with the most support in the House at present, with 21 cosponsors, would also devote most of the revenue to infrastructure, though not specifically green infrastructure. That’s H.R. 4209, the America Wins Act sponsored by longtime carbon tax champion Rep. John Larson (D-CT).

The important thing for carbon tax advocates to remember is that the best bill is the one that can pass. So may the best bill win.