That initiative, I-732, was mounted by a ragtag group of carbon tax acolytes from across the political spectrum, led by charismatic but, to some, polarizing economist Yoram Bauman. I-1631, in contrast, enjoyed active support from elements of organized labor as well as the state’s popular governor, Jay Inslee, whose effort earlier this year to push his own carbon tax bill through the legislature fell one or two votes short. I-1631 was also backed by climate-justice organizations and other “left greens” who two years ago opposed I-732, claiming it was insufficiently inclusive and progressive. 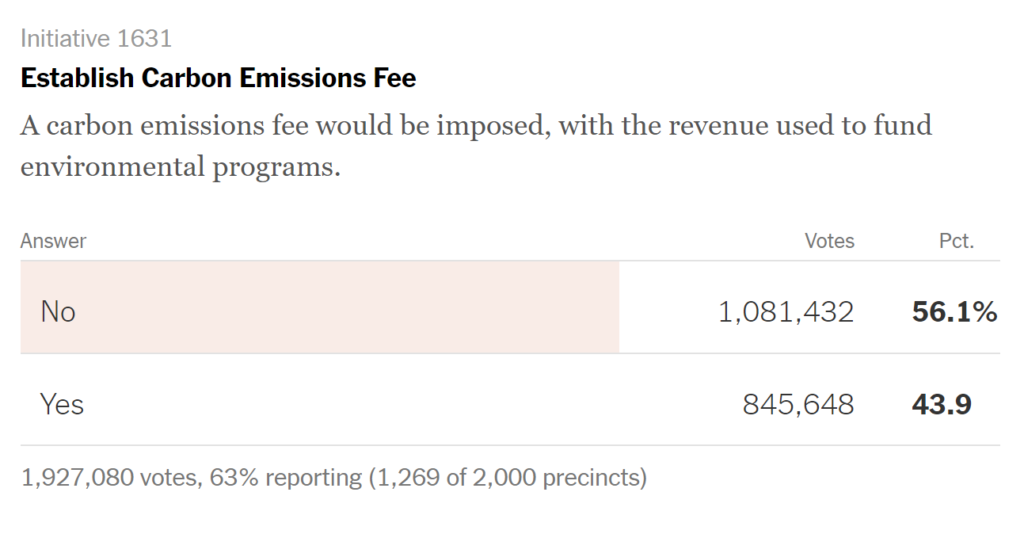 What happened? How come the supposedly broader base of support for this year’s initiative didn’t translate into a close contest, if not a win?

Of course, fossil-fuel money played a role. The latest figures we saw had the anti’s spending $25 million, much of it from British Petroleum, which operates a large oil refinery at Cherry Point in the state’s northwest corner. But the pro forces weren’t completely outgunned, with $12.5 million raised from the likes of Michael Bloomberg, Bill Gates and The Nature Conservancy.

Those figures don’t include the campaign’s final two weeks, when another wave of Big Oil money almost certainly washed ashore. But it feels simplistic to pin I-1631’s poor outcome entirely on the spending gap.

We don’t yet have a good feel for what happened. But maybe assigning the lion’s share of the carbon revenues to unspecified programs to help deliver clean energy and power savings to low-income households, communities of color and indigenous peoples, as I-1631 would have done, was less appealing to voters than to the constituencies who wrote that language into the initiative.

Maybe some voters figured out that, good intentions aside, I-1631’s revenue allocation might not have sheltered them from the higher energy prices resulting from the carbon tax. After all, the weatherization, better transit and community solar that the revenues were intended to pay for, while eminently worthwhile policies in other contexts, wouldn’t necessarily have offset farmers’ and long-distance commuters’ higher gasoline and diesel costs.

And maybe, just maybe, if  leading left greens hadn’t savaged I-732 in 2016 and slandered its sales-tax cuts — which were expressly designed to offset the carbon tax burden on poor and middle-class households — as “tax cuts for corporations” (Heather McGhee, president, Demos) and a burden “on the backs of the poor” (Mary Kay Henry, president, Service Employees International Union), that referendum might have had a fighting chance.

(And let’s not forget Left Green shero Naomi Klein, who slammed I-732 at the last minute with gems like, “[If I-732] is approved by voters, it would be a disastrous precedent that could set back the climate justice movement for a decade  — time that we simply can’t afford to lose.”)

Note Klein’s reference to the “climate justice movement” rather than the “climate movement.” Any analysis of the fate of I-1631 needs to look back at the internecine warfare two years ago over I-732 that pitted one against the other.

Meanwhile, economist Tyler Cowen has a thoughtful piece in Bloomberg, The Carbon Tax Is Dead, Long Live the Carbon Tax, with the intriguing sub-head: Maybe its failure on the ballot in Washington state will inspire economists to come up with better arguments. Here’s his gist:

I don’t view the unpopularity of the carbon tax as merely reflecting the influence of special interests. The American people apparently feel that government ought to be able to solve this problem without imposing a new tax burden on them. For all the talk about disillusionment and cynicism in American politics, this view represents a strange kind of optimism. If this issue really is so important, some voters must be thinking, surely you politicians can find a way to solve it without making us pay for everything. Don’t we give you enough money already? There is something admirable about this attitude, even if it doesn’t apply best to this particular case. (emphasis added)

Other reading: David Roberts’ post-election quickie, Fossil fuel money crushed clean energy ballot initiatives across the country, lacks his usual nuance, but is worth reading nonetheless. For local content, there’s this anodyne statement from Carbon Washington, who organized I-732 and campaigned strongly for I-1631, Despite I-1631 vote, Washingtonians still demand action on climate.

Check back here in the next few days. We put this post up quickly and may add to it.