The need is dire: the levels of CO2 already in the Earth’s atmosphere and being added daily are destabilizing established climate patterns and damaging the ecosystems on which all living beings depend. Very large and rapid reductions in the United States’ and other nations’ carbon emissions are essential to avoid runaway climate destabilization and minimize severe weather events, inundation of coastal cities, spread of diseases, loss of forests, failure of agriculture and water supply, infrastructure destruction, forced migrations, political upheavals and international conflict. 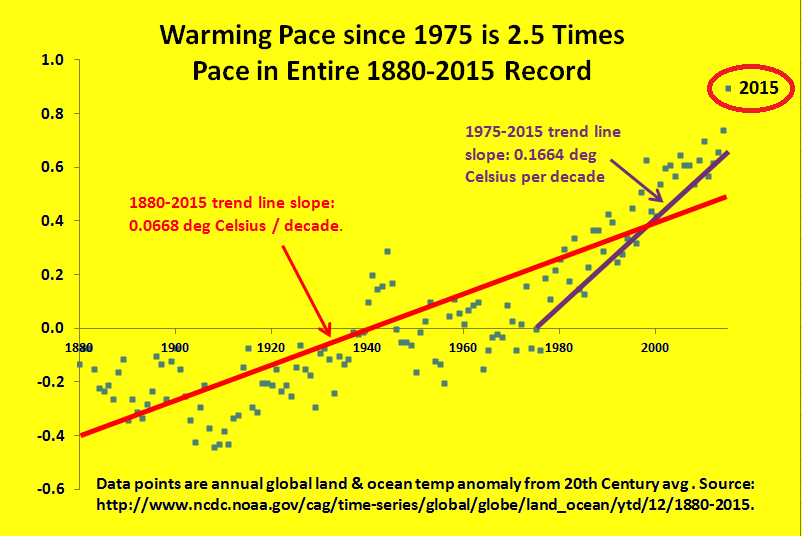 Earth’s climate is warming, and changing, at a terrifying pace.

A robust tax on carbon pollution will create powerful incentives inducing policy-makers and individuals to reduce carbon emissions through conservation, substitution and innovation.

Currently, the prices of electricity, gasoline and other fuels reflect little or none of the long-term costs from climate change or even the near-term health costs of burning fossil fuels. This immense “market failure” suppresses incentives to develop and deploy carbon-reducing measures such as energy efficiency (e.g., high-mileage cars and high-efficiency air conditioners), renewable energy (e.g., wind turbines, solar panels), low-carbon fuels (e.g., biofuels from high-cellulose plants), and conservation-based behavior such as bicycling, recycling and overall mindfulness toward energy consumption.

Taxing fuels according to their carbon content will infuse these incentives at every link in the chain of decision and action — from individuals’ choices and uses of vehicles, appliances, and housing, to businesses’ choices of new product design, capital investment and facilities location, and governments’ choices in regulatory policy, land use and taxation.

A carbon tax won’t stop global climate disruption by itself — other, synergistic actions are required as well. But without a carbon tax, even the most aggressive regulatory regime (e.g., high-mileage cars) and “enlightened” subsidies (e.g., tax credits for efficiency and renewables) will fall woefully short of the necessary reductions in carbon burning and emissions. (For analysis driving that point home, see the 22-page comments, “Design of Economic Instruments for Reducing U.S. Carbon Emissions,” that we submitted in January 2014 to the Senate Finance Committee; or read our post summarizing those comments.)

The dangers of climate change are no longer predictions about the future.”