CO2 emissions will shrink this year. How much?

Note: We’ve revised this post to reflect an April 15 update from Carbon Brief in which it raised its CO2 reduction projections for 2020. More details appear at end of post. — C.K., April 29.

A new post this week from Carbon Brief’s Dr. Simon Evans, Coronavirus set to cause largest ever annual fall in CO2 emissions, projects a 5-6 percent fall this year in worldwide emissions of carbon dioxide from last year’s level on account of the coronavirus. 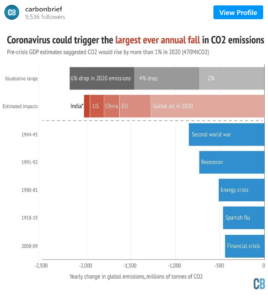 Courtesy, Carbon Brief. Geographical estimates exclude oil since that is subsumed in “Global oil in 2020” figure. Link in opening paragraph leads to CB post which has full graph notes and sources. Note that “tonne” unit is metric ton, or thousand kilograms.

Dr. Evans is highly regarded for his analyses of global energy trends, and his new post does not disappoint. His projections, shown at left, draw on what he calls “five key datasets and projections covering roughly three-quarters of the world’s annual CO2 emissions, including the entire output of China and the US, the EU carbon market, the Indian power sector and the global oil sector.” Those sectors’ projected reductions, shown in the rust-red bar near the top, sum to around 2,000 million metric tons, equivalent to 5.5 percent of the 2019 worldwide total.

The five trailing blue bars in the Carbon Brief graphic underscore the prospective downturn’s unprecedented extent. They denote actual reductions during traumatic world events, from the 1919 Spanish flu pandemic and the 1945 close of World War II to the 2009 financial crisis, which shows the smallest emissions drop. Using tons of decline as the metric — after all, the climate system responds to tonnages of CO2, not percentage changes — none of the earlier five contractions rivals Carbon Brief’s projected 2020 downturn. The closest is the 845 million tonne reduction in 1945, caused not just by the collapse of economic activity in defeated Germany and Japan but also by the battered economies of victor states such as the Soviet Union and the United Kingdom.

Last month, we at Carbon Tax Center published a post estimating that global emissions this year could plunge by as much as 7,640 million metric tons from their business-as-usual level. That would be nearly four times as great a reduction as the 2,000 million tonne drop in Dr. Evans’ Carbon Brief post, a huge gap but one largely explainable by these differences between our respective approaches:

We add this sober warning from Dr. Evans’ post:

To put the potential 2020 coronavirus effect in a broader climate context, it is worth adding that global emissions would need to fall by more than 6% every year this decade – more than 2,200MtCO2 – in order to limit warming to less than 1.5C above pre-industrial temperatures. (This figure is based on the 2018 Intergovernmental Panel on Climate Change (IPCC) special report, which found that global emissions in 2030 needed to be 45% below 2010 levels, in order to limit warming to 1.5C.)

It should go without saying that the forced nature of the 2020 emissions contraction disqualifies it as a model for going forward. Nevertheless, surpassing, even under great duress, and even for just one year, the recurring 2,200 million tonne per year contraction cited as essential by Carbon Brief, is not to be sneezed at.

A useful way to think about CTC’s “extreme” 7,600 million tonne estimate is that it would buy the world three to four years worth of the 2,200 Mt reduction otherwise needed each year to the next … and that in 2023 or 2024 worldwide emissions would need to fall, from the reduced level, by 2,200 million tonnes each year, to get onto the IPCC trajectory for keeping warming to less than 1.5C.

Point being: while Covid-19 is not how the world should have started down the road to reducing emissions, it has gotten our attention and is, at least, a start.

Carbon Brief’s April 15 amendment to its original April 9 post (linked to at the top of our post) reads: Update 15 April 2020: This analysis was updated in light of new forecasts for global oil demand in 2020, which suggest a significantly larger drop this year. The original version had put the potential impact of coronavirus at 1,600MtCO2 in 2020, equivalent to 4% of 2019 emissions.