The Carbon Tax Center considers former Rep. James McDermott’s “Managed Carbon Price Act,” to be one of the two most effective climate measures ever introduced in Congress. (The other, the “America’s Energy Security Trust Fund Act” introduced in 2009 and re-introduced in 2015 by Rep. John B. Larson, chair of the House Democratic Caucus and fourth-ranking Democrat in the House of Representatives, had a similar price and ramp-up and therefore a similar emissions reduction profile.) The McDermott bill would have established a national carbon tax starting at a rate of $12.50 per metric ton of carbon dioxide, rising annually by the same $12.50/metric ton (those figures equate to $11.34 per U.S. or “short” ton).

We estimate that the carbon tax levels mandated under the McDermott bill would have reduced U.S. CO2 emissions from fossil fuel combustion by 1/3 within a decade. Using our 8-sector carbon-tax-model spreadsheet, we project that the bill would have led to the progression of emission reductions shown in the graph below: 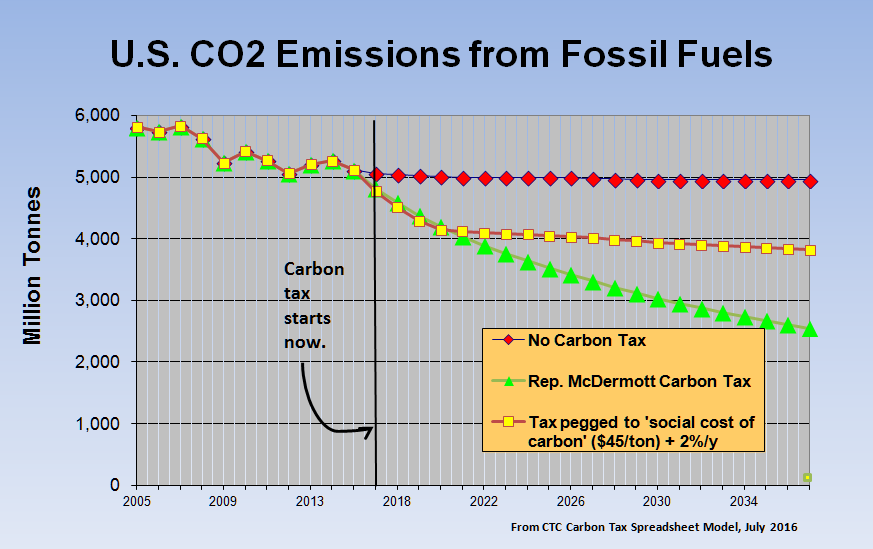 U.S. CO2 emissions from burning fossil fuels would decline by 1/3 in the first decade after enactment of Rep. McDermott’s measure, according to projections by CTC. The middle curve, included for comparison, shows emissions if the carbon tax is set at the “social cost of carbon.”

Carbon taxes embody the principle that truthful prices for fossil fuels must include the “externality costs” that their burning imposes on society, i.e., that polluters should pay for the damage caused by polluting. Briskly increasing carbon taxes will instill in energy consumers and producers strong incentives to efficiently reduce their use of fossil fuels and the attendant emissions of carbon dioxide while increasing efficiency and shifting to renewable energy.

The “supply-side response” will materialize largely through investment — for example, in carbon-free wind or solar power farms or lower-carbon gas-fired generating plants, or possibly in low-carbon biofuels. The  “demand-side” response will arise in literally millions of decisions, ranging from the choice of car to drive (in multi-car households) to longer-term location decisions of families, businesses and institutions, all reflecting the fact that usage is at least somewhat sensitive to price, i.e., there is some “price-elasticity” (to use economic jargon) in energy usage.

To capture these responses quantitatively, CTC has developed an 8-sector National Carbon Tax Model, which we update annually. The model captures both demand- and supply-side responses to carbon taxes and incorporates time lags in end-users’ responses to the tax-induced higher prices. It divides U.S. CO2 emissions into seven sectors: electricity, which in 2015 accounted for 37% of nationwide CO2 emissions; personal ground travel, accounting for 22% (almost entirely from burning gasoline); freight (goods movement), 9%, largely diesel fuel for trucks; jet fuel for air travel (4%), oil refining (6%), other petroleum (also 6%), natural gas other than for electricity (11%), and miscellany (5%).

We apply separate long-run demand price-elasticities — 70% for electricity, 35% for gasoline, 60% for jet fuel, and 40-50% for the other sectors — with further assumptions for supply-side substitution of carbon as well. (All assumptions are detailed in the spreadsheet; users may input their own. Readers interested in the carbon contents of electricity and various fuels may also wish to examine our Carbon Contents spreadsheet.)

As configured in the file version, the model assumes an initial (year-2016) carbon tax of $12.50 per metric ton of carbon dioxide, ramped up each year by the same $12.50 per metric ton (so that the tax level in the tenth year is $125 per metric ton of CO2, which equates to $113.40 per short ton, for example). The model indicates that such a carbon tax would, by 2026, result in U.S. CO2 emissions falling 31-32% below today’s baseline projections for 2026, and 41% below actual CO2 emissions in 2005. Also strikingly, the carbon tax provided in the McDermott bill would cause U.S. petroleum consumption in 2026 to be 26% less than 2005 actual consumption and 19% below 2026 projected consumption (without a carbon tax). 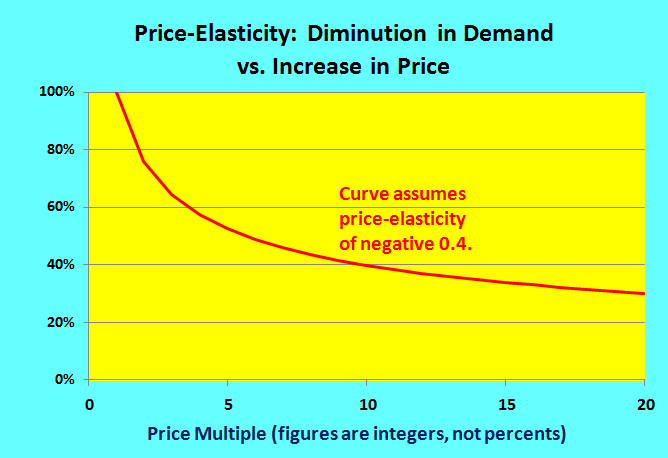 Price-elasticity denotes the extent to which rises in price engender a drop in demand. A price-elasticity of 50% means that the drop in demand is half as steep as the price rise. Thus, a 2% increase in price would engender a 1% decrease in demand. However, for large price increases such as we propose over time, the drops in demand would be proportionately less, reflecting the law of diminishing returns. And at the same time the phased-in tax is causing prices of fossil fuels to rise, incomes would be rising, offsetting some of the reductions.

Because many if not most determinants of energy use such as infrastructure, location and capital goods like houses and cars can’t be changed overnight, drops in demand due to higher prices can take years to materialize fully. Our elasticity estimates are “long-run” figures, requiring around a decade to manifest fully, as opposed to “short-run” elasticities that apply to rapid but smaller changes, i.e., within a year. Short-run elasticities also exist, of course, as everybody who hesitates before paying an increased price for a product is aware, but they are less than the long-run values.

In a September 2015 blog post, What an Energy-Efficiency Hero Gets Wrong about Carbon Taxes, we explored (and dispelled) some myths about price-elasticity and carbon taxes that are surprisingly widespread, even among veteran environmental advocates and analysts. It remains one of our most widely read posts, and we encourage everyone to read it who is trying to understand how, why and how fast a carbon tax can be expected to cut carbon emissions.

Below we give links to articles and papers on energy price-elasticity in the United States. Some are for a general audience, some are technical. Many focus on automobiles and gasoline, the area of energy use that has been studied the most.

We invite CTC friends and visitors to comment on these materials and to suggest further reading. In 2007 environmental journalist-activist Gar Lipow compiled a handy bibliography of some of the best studies on the price-elasticity of demand for energy. Gar’s summaries of nearly two dozen price-elasticity studies from the U.S. and around the world are an invaluable guide to this important subject.

We also recommend the overview of seven sets of integrated assessment model results presented in “Carbon Taxes to Achieve Emissions Targets, Insights From EMF-24” (Stanford Energy Modeling Forum, 2012) which concludes that a carbon price will need to rise briskly, to roughly $440/ton CO2 by 2050 in order reduce U.S. emissions in that year by 80%. That’s a serious price trajectory, in line with CTC’s modeling results.