This page reports on public opinion and beliefs on wealth taxation and related subjects.

Much of the material here is short takes and links.

“Senator Elizabeth Warren’s plan to tax the assets of America’s wealthiest individuals continues to draw broad support from voters, across party, gender and educational lines. Only one slice of the electorate opposes it staunchly: Republican men with college degrees. Not surprisingly, that is also the profile of many who’d be hit by Ms. Warren’s so-called wealth tax, which has emerged as the breakout economic proposal in the Democratic presidential primary race.”

More from the Times Nov 29 story:

The wealth tax has lost a few points of support since the last time The Times asked about the issue, in July. But it remains broadly popular, even more so than it was in February. Three-quarters of Democrats and more than half of Republicans say they approve of the idea of a 2 percent tax on wealth above $50 million.

Support for a wealth tax cuts across many of the demographic dividing lines in American politics. Men and women like it. So do the young and the old. The proposal receives majority support among every major racial, educational and income group.

One note that might give Republicans pause: The wealth tax is much more popular than the tax-cut package that President Trump signed in 2017, which only 45 percent of Americans in this Times survey said was a good move. That’s a decline from April, when the law was drawing slightly more approval than disapproval. 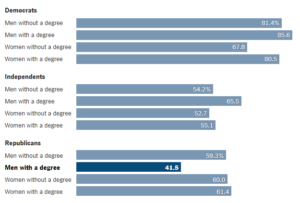 Share in NYT Nov 2019 poll saying they approve of a wealth tax.