The Climate Leadership Council today announced that it has won support for its carbon dividends plan from ExxonMobil and other major corporations, as well as prominent individuals including physicist Stephen Hawking. The news, reported in op-ed pieces, news stories and a full-page ad in the Wall Street Journal’s Washington, DC edition, comes just four days after release of a new poll suggesting that climate concern among U.S. voters is surging to new heights. 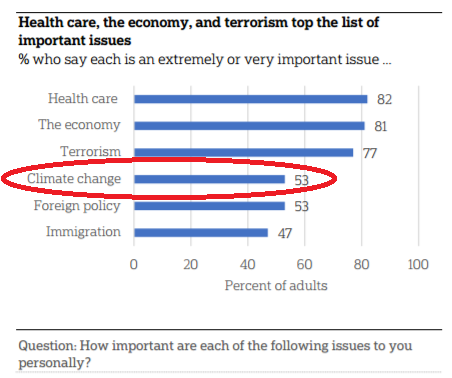 Fifty-three percent of people polled called climate change “extremely or very important” to them personally, perhaps the first time a majority of U.S. respondents assigned climate change such a high level of concern. Indeed, climate is often viewed in political circles as a “low-salience” issue, one that people profess to care about but don’t act on politically.

The 53% figure belies that idea, though the response might have been heightened somewhat because respondents were asked to specifically rate climate (and other issues) rather than to name, say, “the three most critical issues to you and your family.” (The full poll may be downloaded here. See graphic below for a breakout of the climate responses.) 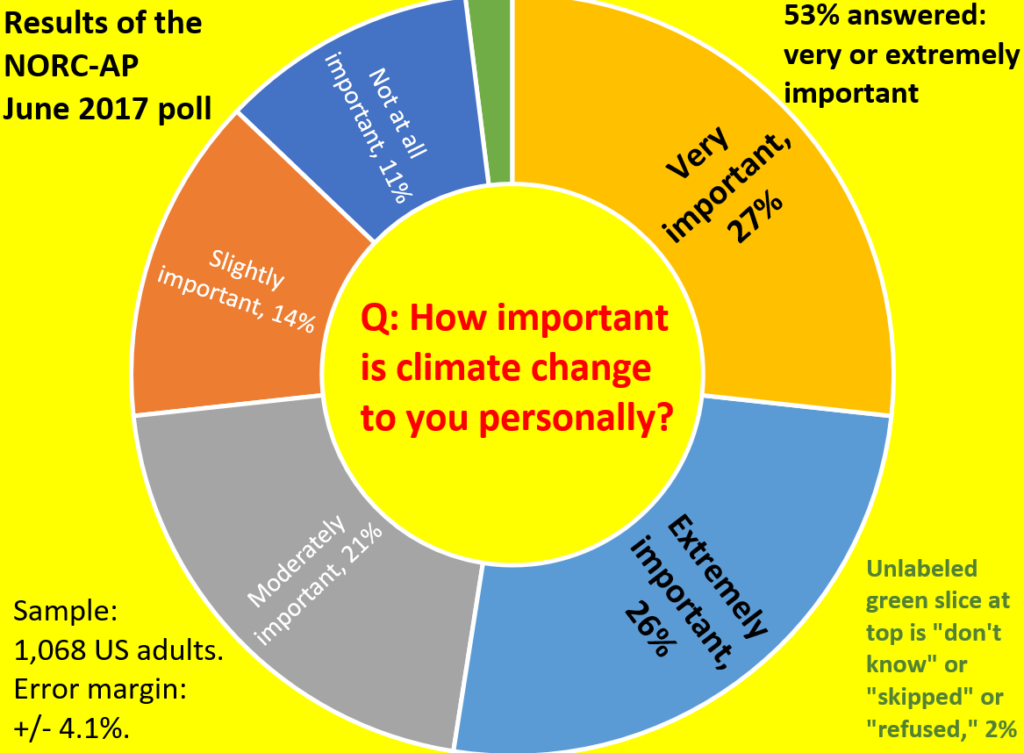 Climate change is now “extremely or very important” to a majority of Americans.

The apparent broadening of public concern could translate into repudiation of climate-denying and ignoring candidates in the 2018 Congressional primaries and elections. It may also provoke more members of Congress to endorse the Citizens’ Climate Lobby’s Republican Climate Resolution or take seriously the Climate Leadership Council’s Republican-branded carbon dividends plan. 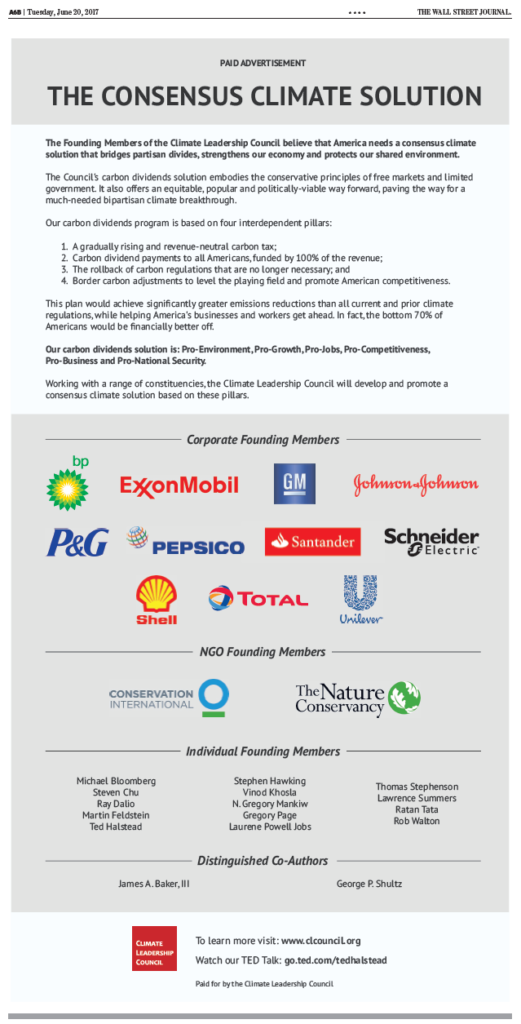 The broadening of support, orchestrated by Climate Leadership Council executive director Ted Halstead, constitutes an effort to move simultaneously to the left and right: leftward with a relatively high starting carbon tax rate ($40 a ton) and the income-progressive “dividending” of tax revenues rather than cuts to corporate taxes; and rightward with the backing of ExonMobil, which many climate activists hold in contempt for its decades of funding a network of climate denialists who have helped paralyze climate action in the U.S.

From time to time ExxonMobil has said that it “supports” carbon taxes, but as we reported late last year, it has never backed actual carbon tax legislation and has limited its expressed interest to carbon taxes in the $20/ton range. ExxonMobil’s endorsement of the council’s plan is a step forward for the company that could portend support from other quarters long considered hostile or passive on carbon pollution pricing.

With a high starting tax rate, a commitment to disbanding most federal carbon regulation and an offer to indemnify carbon polluters from litigation over climate damage, the council’s proposal defines a broad new center that could eventually unite political forces from the left and right. That strategy appeared today to gain important validation from Michael B. Gerrard, the influential director of the Sabin Center for Climate Change Law at Columbia Law School and a widely respected environmental litigator. Gerrard told The New York Times, “If a sufficiently high carbon tax were imposed, it could accomplish a lot more for fighting climate change than liability suits.”

This link goes to the council’s WSJ ad. Treasury Secretaries emeriti Larry Summers and George Shultz have an op-ed in today’s Washington Post, This is the one climate solution that’s best for the environment — and for business. Links to other op-eds and news coverage are at the Climate Leadership Council’s Web site.