Naomi Klein Is Wrong On The Policy That Could Change Everything

On this last day before the elections, the afternoon light was waning in my Manhattan office and I thought I could be done fending off attacks on I-732, the Washington state carbon tax initiative.

Not so fast. A CTC supporter wrote me, cryptically, “Naomi Klein should know better by now, no?” I checked Klein’s Twitter feed, @NaomiAKlein, and, uh oh, there it was: a piece by Klein in The Nation, The Carbon Tax on the Ballot in Washington State Is Not the Right Way to Deal With Global Warming. 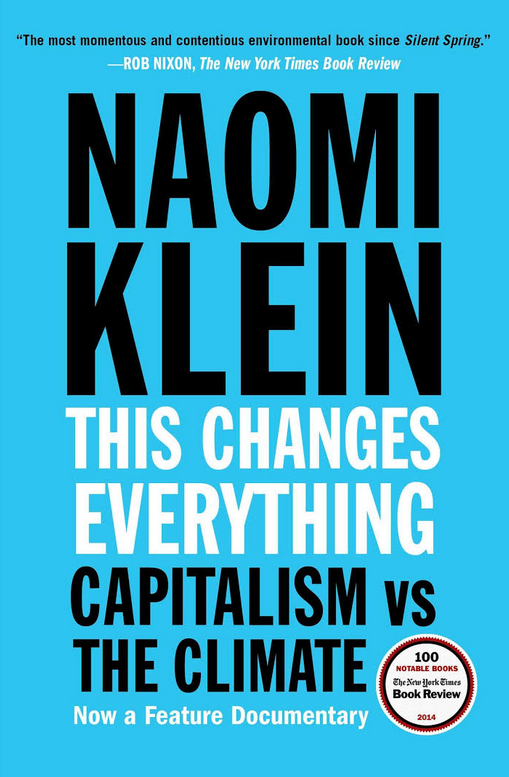 The policy that could do the most to start changing everything is on the ballot in Washington state.

I read her piece. It’s mercifully brief, just ten paragraphs, so I thought I would let it go. But Klein, author most recently of This Changes Everything: Capitalism vs. The Climate, is charismatic, fluent and highly visible in the climate movement. And just about everything she said in her Nation piece is so misinformed or short-sighted that it feels important to respond. So here goes, in point-counterpoint.

Klein Paragraph 1: The imperatives of the climate crisis and the logic of economic austerity are at war—and Washington State is on the front lines.

CTC: Powerful lede, but is Klein actually tagging I-732 with the dreaded “austerity” label? What exactly does she mean? (Spoiler alert: she never says.)

Klein Paragraph 2: So-called “revenue-neutral” carbon pricing — whereby the proceeds are used to fund tax cuts — has long been a cherished hobbyhorse of free-market economists and the odd Republican who favors climate action. It’s also the policy of choice for big polluters like ExxonMobil. And now this right-wing friendly model is being pushed in Washington State, thanks to Initiative 732.

CTC: “Tax cuts.” A percentage point cut in Washington’s state sales tax — the principal means by which I-732 ensures that raising energy prices through a carbon tax won’t injure low- and middle-income families — is dismissed as a mere “tax cut,” a phrase that of course conjures giveaways to the hedge-fund class. What Klein labels right-wing is actually friendly to and designed for the very groups she purports to care about: families below or near the poverty line; undocumented immigrants; over-leveraged folks struggling to stay middle-class.

Klein Paragraph 3, abridged: [If I-732] is approved by voters, it would be a disastrous precedent that could set back the climate justice movement for a decade  — time that we simply can’t afford to lose.

CTC: Klein turns logic on its head. Following a decade of nearly total legislative silence on carbon taxes — a silence imposed not just by Republican denialists but by a myopic U.S. green movement — Klein frets that enacting an actual carbon tax in the USA and blowing open the door to a possible national carbon tax will set back climate action for another ten years?

Klein Paragraph 4: Some have accepted the logic that something is better than nothing, even arguing that a “tax swap” could substitute for a just transition to a low-carbon economy. The evidence proves otherwise. In British Columbia, two-thirds of the tax cuts have ended up in corporate pockets, while carbon emissions have been rising in recent years and the fracking industry has boomed.

CTC: By design, most of the BC carbon tax revenues end up in taxpayers’ pockets through personal income tax cuts as well as a low-income tax credit. A 2015 study by University of Ottawa graduate students found BC’s carbon tax “highly progressive” distributionally. In any case, I-732 is explicitly and intentionally structured differently, to apply 75 percent of carbon tax revenues to cut the Washington sales tax.

Yes, CO2 emissions in British Columbia are up slightly since 2012, but that’s because the BC tax level has stayed fixed. In contrast, the Washington carbon tax would rise 3.5% a year faster than the general inflation rate. And If fracking has boomed in BC, don’t blame the province’s carbon tax for its lack of a keep-it-in-the-ground movement.

Klein Paragraph 5: By some estimates, I-732 would raise gasoline and electricity prices less than 15 percent by 2040 in Washington State—hardly enough to jumpstart an urgent, sweeping phase-out of fossil fuels. Meanwhile, it would offset carbon revenues by cutting taxes for big corporations, including major polluters. (According to the Seattle Times, Boeing could see windfalls of tens of millions annually.) 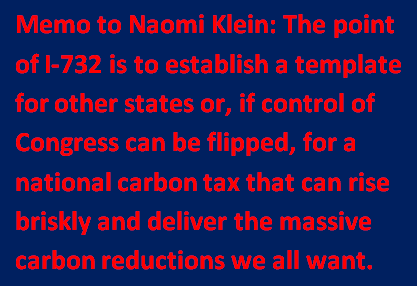 CTC: Klein’s math is off; by 2040, the tax-caused rise in gasoline prices would be 25 percent. But the bigger point she ignores is that a carbon tax in any one state like Washington (or a lone province like British Columbia) can’t be set high because of interstate competitive pressures — which is also why I-732 sets aside 10-15 percent of its revenues for tax reductions for businesses like Boeing. The whole point of the Washington state initiative is to establish a template for other states or, if control of Congress can be flipped, for a national carbon tax that can rise briskly and deliver massive carbon reductions, as we noted in a blog post last month.

Klein has five more paragraphs, but in the interest of time let’s cut to the chase:

Klein Paragraph 9: A paltry, revenue-neutral carbon tax simply cannot deliver the massive green energy investments and community-driven solutions we all need. Science-based climate action means an unprecedented, rapid, and decisive shift to renewables; a truly equitable carbon tax can play an important role in spurring the transition, but it won’t work unless we make the polluters pay, and put their immoral profits to work repairing the damage they have knowingly created. The way to do that is to mobilize the broadest possible coalition—led by the front-line communities who stand to benefit most from building a cleaner and fairer economy.

CTC: Talk about “making polluters pay” is great rhetoric, but in our society as currently configured that includes all of us who flip on switches, turn on ignitions and buy stuff. And since the society we live in (to echo another post of mine last month) doesn’t appear to favor massive green energy investments and community-driven solutions, we have to rely even more heavily on robust carbon taxes; and these need to be largely revenue-neutral if they’re going to (i) not drive low-income families further into poverty and push middle-income families deeper into debt, and (ii) be politically acceptable.

Klein’s call to put fossil fuel company profits to work repairing damages is more of the same empty rhetoric. The task before us is to shrink, shame and strangle the fossil fuel companies. If Klein can offer a way to do that more quickly and effectively than a briskly rising U.S. carbon tax — one that I-732 can start paving the way for — I’m all ears.

Until then, could she please turn down the volume?

Addendum: CTC contributor Dan Lazare presciently dissected Klein’s limited comprehension of the power of carbon taxing almost two years ago, in this space, with Why Is Naomi Klein So Cool on a Carbon Tax? It’s a great read.