The Seattle Times Misfires on I-1631

Washington state’s largest newspaper is urging a No vote on I-1631, the carbon tax initiative on the state’s Nov. 6 ballot.

The Seattle Times editorial raises a few sound objections. But the paper falls into the same trap that ensnared some I-1631 proponents who fought a predecessor carbon tax initiative, I-732, two years ago: missing the forest for the trees.

Despite its flaws, it’s critical that Washington voters pass the initiative.

It [I-1631] would collect more than $1 billion yearly. An un-elected board appointed by the governor would propose how to spend it. The initiative requires seats for powerful entities, such as labor and tribes, promising them large cuts.

The Legislature has the final say on appropriations. But the carbon board is structured to be a political juggernaut. Legislators might have difficulty mustering political will to change course. 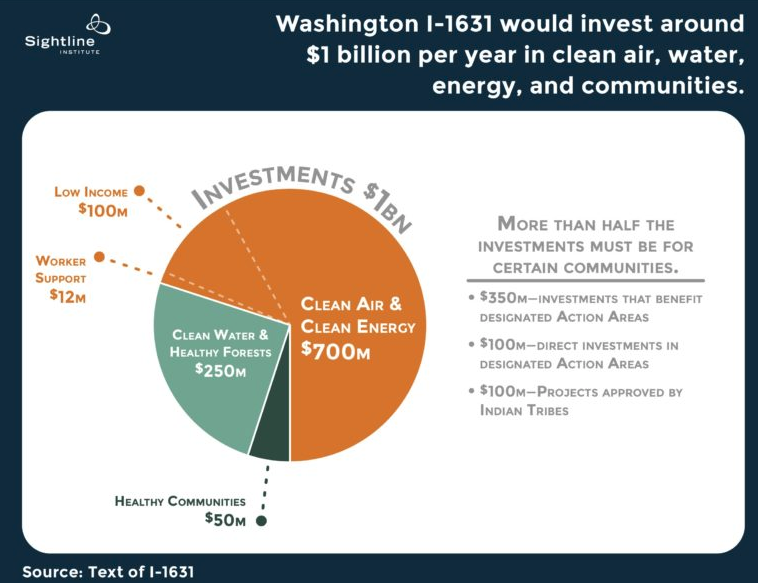 Yes, taxpayer dollars ideally should be appropriated by the legislators those taxpayers elected rather than by an unaccountable panel of interest group representatives. (If you don’t see the problem there, imagine a board chosen by a conservative Republican governor.)

And granted, the initiative specifies that most of the carbon revenues must be dedicated to “clean air and clean energy investments.” But the language leaves plenty of room for projects that might have little or no impact on the state’s greenhouse gas emissions.

The Times also expresses dismay that the measure will — gasp! — raise prices of fossil-fuel energy, as if that weren’t the whole point. It’s a bit like complaining that cigarette taxes will raise costs for smokers.

Most of the revenue from the defeated 2016 carbon tax initiative, I-732, would have gone to cut the state’s regressive sales tax, easing the cost burden on households and businesses. I-1631 dedicates some funds to bringing cleaner energy to low-income households. But some Washingtonians with high energy bills relative to their incomes — especially low-income and rural residents — will nevertheless face higher costs. Proponents counter this concern in part by noting that some funds will flow to and benefit rural areas, as this Sightline Institute report argues.

Notwithstanding its drawbacks, passing I-1631 is critical. If the U.S. is ever to price carbon in a serious way, some state will have to go first, and that first measure probably won’t be perfect. Some of the groups promoting I-1631 today got that wrong two years ago when they opposed I-732 because they didn’t like how the revenue was used. Now the Seattle Times is repeating that mistake.

We need to start taxing carbon, — even the apolitical IPCC said so earlier this month — and arguably the best thing to do with the revenue is whatever will get the most votes for taxing carbon. I-732 wasn’t it. I-1631 might be.

A recent poll by the reputable firm Elway Research found 50% of voters supporting and only 36% opposing the initiative this time. Still, Elway’s survey size, just 400 voters, was thin, and polling on public questions is notoriously tricky. Moreover, there’s a $26 million oil-money war-chest working to turn the vote around in the final days. Anything can happen.

The good news is that this time the pro-initiative forces are also well-funded, with almost $14 million banked, including $1 million from Microsoft founder Bill Gates. Gates posted a powerful endorsement of I-1631 on LinkedIn earlier this month. He gets what the Seattle Times doesn’t:

If 1631 passes, it will create the first [carbon] fee in the United States. Going first is never easy, but Washington has a history of pioneering new ideas. And because of all the benefits — shoring up nuclear and hydropower, enhancing the state’s role as a leader in innovation, and most of all accelerating progress on climate-change solutions — I believe it will be worth it.