To The Left-Green Opponents of I-732: How Does It Feel?

Though they could also have tweeted: Fossil-Fuel Right & Doctrinaire Left team up to battle Wash. state #carbontax measure. 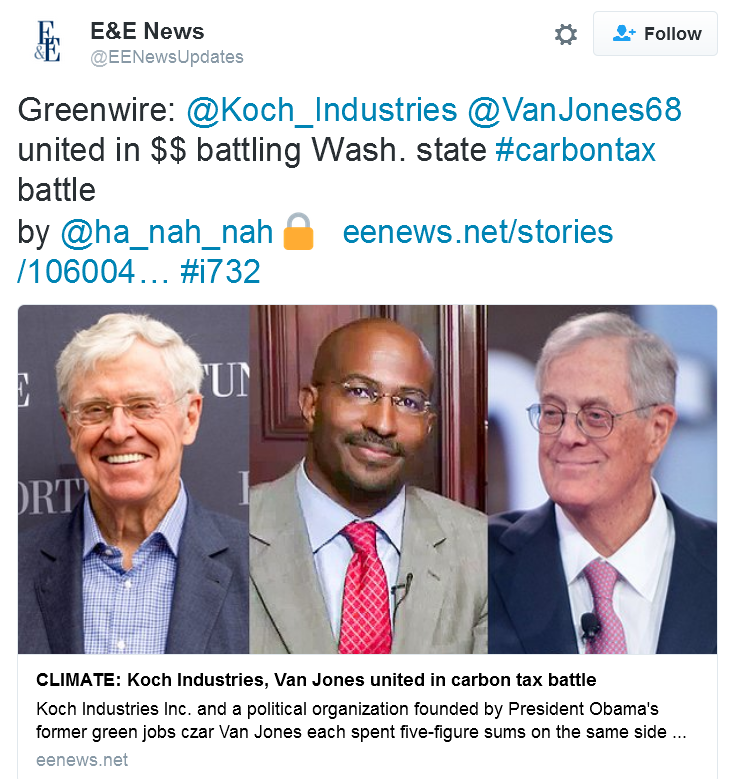 The occasion was the news that Koch Industries just poured $50,000 into the coffers of the No On 732 forces. As everyone knows who wasn’t slumbering through the past two decades, the Hard Right takeover of Congress and dozens of statehouses and legislatures owes much to Koch Industries’ prolific bankrolling of reactionary candidates and lobby groups. Brothers Charles and David Koch are billionaires many times over, thanks to Koch Industries’ empire of pipelines, refineries, mines and wells that for generations have spewed carbon pollution into the atmosphere for free.

The Koch brothers are no dummies. They know what fellow fossil fuel exec Robert E. Murray told Kirk Johnson and Coral Davenport of The New York Times the other day: Passing I-732 to enact a carbon tax in Washington state could ignite a trend that “would eliminate the use of all fossil fuels.”

We at the Carbon Tax Center know it too. Which is why we’ve pulled out all the stops to educate Americans from Washington and beyond on the merits of that state’s carbon tax referendum and its potential to kick open the doors to national carbon taxing.

What’s been hard to fathom is the drumbeat from so-called left greens like visionary climate hawk and political activist Van Jones in opposition to the Nov. 8 ballot measure.

In the past two weeks we’ve had to contend with bizarro posts like “Here’s Why a Carbon Tax Helps Fossil Fuel Companies, Not the Environment” (an op-ed in AlterNet by Food & Water Watch) and “Why Exxon Loves the Carbon Tax—and Voters Should Not” (the same group’s op-ed in the ironically named Yes! magazine).

It was just a matter of time before the Koch Bros. cut a check to stop I-732. Meanwhile, the Yes forces have no Exxon money; nor would they take any.

We responded to both last week — before today’s filing by No On 732 revealed that the Koch brothers are helping finance the opposition. Needless to say, only an ideologue could believe that Exxon’s once-a-year opining for hypothetical carbon taxes counts for more than $50,000 in Koch Brothers money against an actual one. (Click here to see the Koch contribution in the No On 732 list.) And sure enough, there was a lot more ideology than reason on display in a press event yesterday in which leading left greens inveighed against I-732.

We were allowed to listen in, but not to speak or ask a question. No transcript or audio has been made available, but here’s a sample of what we jotted down from speakers’ remarks. (Remember, they were addressing a carbon tax that has been meticulously designed to make Washington state taxes less regressive, primarily by dedicating the lion’s share of revenues to slice a full percentage point off the WA sales tax.)

You’re doing climate policy on the backs of the poor. — Van Jones, CEO of Green for All

A “neutral” 732 is perpetuating a one-sided economy of wealth and privilege. This is not a time for more tax cuts for corporations. — Heather McGhee, President, Demos

We stand united to defeat 732. We agree that climate policy cannot be promoted on the backs of the poor. — Mary Kay Henry, president, Service Employees International Union

We’re working on an alternative proposal. There are difficult legal questions. We’re beefing up the struggle after the election. — Rich Stolz, Director, One America

The last quote was in response to a reporter’s question about the alternative to I-732 that the left greens in Washington have talked about for years but never actually written. (Spoiler alert: writing the kind of ballot measure the left greens purport to want is devilishly difficult, in large part because the various groups have competing as well as overlapping interests, which are hard to reconcile. A revenue-neutral measure like I-732 didn’t face that problem.)

The untethering of those quoted statements from the reality of I-732 — a measure meticulously designed around a sales tax cut so low- and middle-income families aren’t harmed — is distressing to me personally. I’m a long-time admirer of every one of the organizations whose leaders I’ve just quoted. As I’ve said many times in this space, I’m a green and I’m on the left. I want to be partnering with Van and Heather and Mary Kay and Rich, not fighting them.

To Van Jones et al., how does it feel to be on the same side as Charles and David Koch? That’s the corner you’ve painted yourselves into.