Carbon taxing isn’t something you expect to see mentioned in What Happened, Hillary Clinton’s memoir about losing the 2016 election to Donald Trump. But deep in the book’s weeds we find a telling new window into how Clinton “blew the biggest slam dunk in the history of American politics” (as one political pro vented to New Yorker editor David Remnick; expletive deleted here).

Around p. 240* Clinton brings up carbon dividends — a form of carbon taxes — as the type of “bold, creative ideas” she says Democrats must offer Americans. She generously name-checks Peter Barnes, an avatar of carbon dividends, and points to Alaska’s “Permanent Fund” that annually divvies up North Slope oil royalties equally to all state households. Then she writes:

[S]ome Republican elder statesmen such as former U.S. Treasury Secretaries James Baker and Hank Paulson recently proposed a nationwide carbon dividend program that would tax fossil fuel use and refund all the money directly to every American … Under such a plan, working families with small carbon footprints could end up with a big boost in their incomes. [Bill and I] spent weeks working with our policy team to see if it could be viable enough to include in my campaign … Unfortunately, we couldn’t make the math work without imposing new costs on upper-middle-class families, which I had pledged not to do. (emphasis added)

Like so much with Clinton, this passage is strong on details and weak on vision. 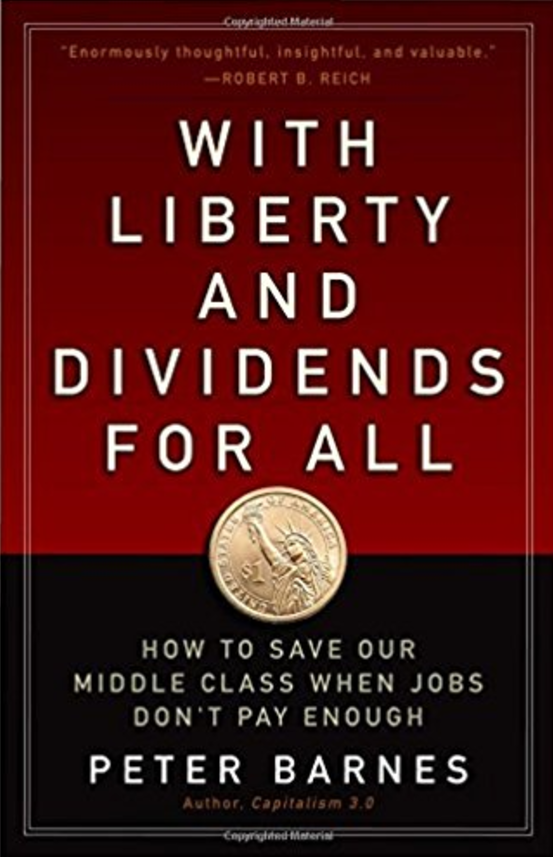 Clinton name-checked this book in her memoir but wouldn’t campaign on its ideas.

Clinton is right that carbon dividend schemes will raise incomes of most working families. She is right that their gain will come at the expense of affluent families, whose carbon footprints are larger. Revenue distribution from a fixed revenue pie is, by its nature, zero-sum: what is disbursed to one class of recipients can’t be available to another.

Of course, any policy that transfers wealth from rich to poor is by definition income-progressive, which puts carbon dividends squarely in the Democratic Party tradition of Roosevelt, Truman and Johnson. Climate benefits aside, carbon dividends’ distributional benefits make the policy a natural for progressives, as we pointed out last week in our post, The climate solution that boosts income for over 60% of Americans — the ones who most need it.

But did Clinton’s policy team really “spend weeks” searching for the carbon-revenue equivalent of a perpetual motion machine — one that would diminish inequality without costing “affluent families” a dime? Doubtful. The impossibility would have been obvious in fifteen minutes, especially to her policy-smart husband. Besides, carbon dividends didn’t suddenly originate with James Baker et al.; they’ve been a staple of carbon tax advocacy for nearly a decade. Their distributional impacts are well-established.

What’s more likely, and as Clinton herself hints, is that her team spent weeks trying to find the messaging to sell carbon dividends to her upper-middle-class base. But that should have been easy as well; their message could have gone like this:

Carbon dividends are a policy we can put in place quickly to accelerate our country’s transition from climate-killing, health-killing fossil fuels, with no new administrative machinery, which the rest of the world can emulate. Those who are doing well will have to contribute more for the common good, but this is a way of making every American feel more connected to our country and to one another — part of something bigger than ourselves. (Bold section are Clinton’s own words, from the discussion of carbon dividends in her book; prior text is mine.)

Yes, Trump and his backers would have pilloried Clinton for backing a carbon tax. But she was being hounded anyway for a hundred other reasons, both real and ginned up. Why not take a stand? Indeed, why not take a page from Bernie Sanders’ primary campaign playbook? In his April 14, 2016 debate with Clinton, for example, Sen. Sanders unapologetically supported “a tax on carbon so that we can transit away from fossil fuel to energy efficiency and sustainable energy at the level and speed we need to do.”

Watching that debate, I imagined Americans who were tepid or worse on carbon taxing nonetheless admiring Sanders’ forthrightness. Some might even have been swept up with a new openness to the idea of carbon taxing.

To be clear, failure to back carbon taxing isn’t why Hillary Clinton lost last November. But her inability to stand for something bold like carbon dividends was indicative of her incapacity to transcend policy details and connect them to a larger vision. And that arguably cost her the election every bit as much as  Comey, Russia and the other usual suspects.

* Page number from “What Happened” is approximate, as viewed on a Kindle. The conception and shape of this post benefited greatly from CTC supporter and blog contributor Rachael Sotos. Note that our original headline, “Hillary Clinton and the Missing Carbon Dividends,” has been changed.