To grasp how deep the fault line now runs through the Democratic Party and between its presidential candidates, look no further than the exchange between Bernie Sanders and Hillary Clinton over a carbon tax in Thursday night’s debate:

SANDERS: I am proud that I have introduced the most comprehensive climate change legislation, including a tax on carbon. Something I don’t believe Secretary Clinton supports.

MODERATOR (to Clinton): Go ahead and respond.

CLINTON: Well, I’m a little bewildered about how to respond when you have an agreement which gives you the framework to actually take the action that would have only come about because in the face of implacable hostility from the Republicans in Congress, President Obama moved forward on gas mileage, he moved forward on the Clean Power Plan. He has moved forward on so many of the fronts that he could, given the executive actions that he was able to take.

And, you know, I am getting a little bit concerned here because I really believe that the President has done an incredible job against great odds and deserves to be supported.

SANDERS: All right, here is — here is a real difference. This is a difference between understanding that we have a crisis of historical consequence here, and incrementalism and those little steps are not enough. 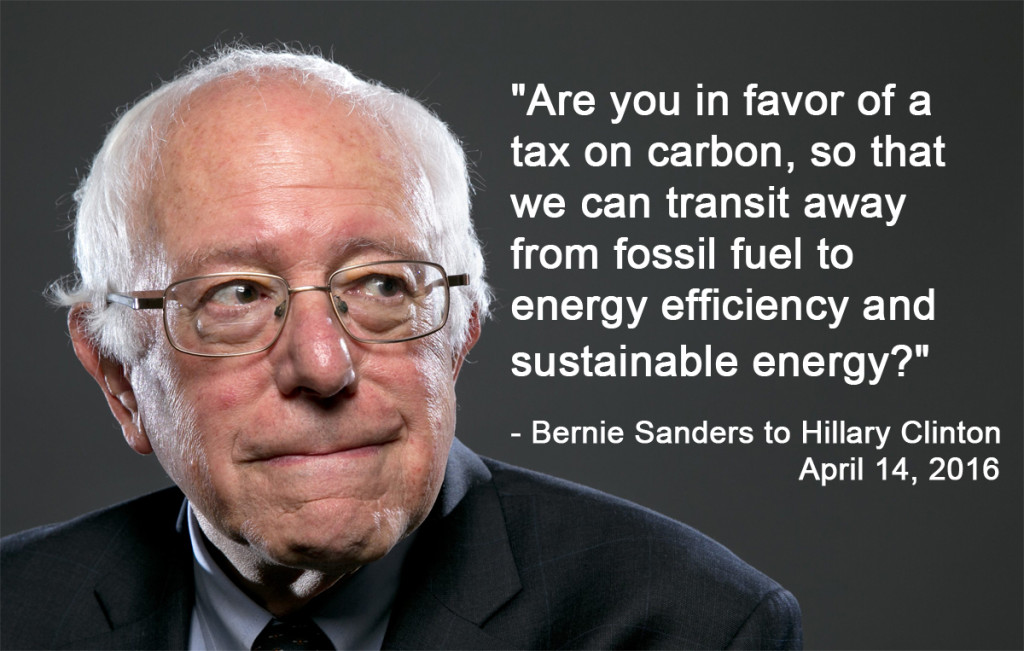 Not right now. Not on climate change. Now, the truth is, we have got to tell the fossil fuel industry that their short-term profits are not more important than the future of this planet. And that means — and I would ask you to respond. Are you in favor of a tax on carbon so that we can transit away from fossil fuel to energy efficiency and sustainable energy at the level and speed we need to do?

CLINTON: You know, I have laid out a set of actions that build on what President Obama was able to accomplish, building on the Clean Power Plan, which is currently under attack by fossil fuels and the Right in the Supreme Court, which is one of the reasons why we need to get the Supreme Court justice that President Obama has nominated to be confirmed so that we can actually continue to make progress.

I don’t take a back seat to your legislation that you’ve introduced that you haven’t been able to get passed. I want to do what we can do to actually make progress in dealing with the crisis. That’s exactly what I have proposed.

And my approach I think is going to get us there faster without tying us up into political knots with a Congress that still would not support what you are proposing.

To be clear, what bewilders Secretary Clinton is not a carbon tax, but, as she said, “how to respond.” As a policy wonk par excellence, Clinton almost certainly knows the power of a carbon tax very well.

Clinton probably grasps that taxing carbon emissions cuts to the heart of the climate issue by rewarding each and every step that reduces use of carbon fuels; that it harnesses the power of the market — the market! — to spur innovation and investment in clean energy; and that it makes climate polluters pay and diminishes their political power, thus helping untie the political knots she professes to decry.

But cutting to the essence on climate or virtually any other issue, and heeding the political groundswell demanding bold action, just doesn’t seem to be in her DNA, not to mention the DNA of the wing of the Democratic Party that her husband enshrined during his presidency.

The charitable interpretation is that Clinton is wisely refraining from saddling herself with a position that the Republican Party can use to attack her between now and November — as a tax-and-spend Democrat who will damage the middle class. And indeed, a carbon tax is so revolutionary as well as sensible and necessary that Clinton, in stark contrast to Sanders, would likely have a hard time not just defending but championing it against the Republican nominee.

Instead, she would fall back, as she did Thursday evening in Brooklyn, on gasoline mileage and the Clean Power Plan — measures that, as we have explained here ad nauseam, are fine so far as they go, which, alas, isn’t very far. The Clean Power Plan, we pointed out nearly two years ago, merely requires electric power generators (which by now barely account for a third of U.S. climate pollution) to switch from coal to gas and add wind and solar generation at a far lesser rate than they’ve been doing for a decade. As for the vaunted increase in vehicle miles per gallon, it is already being badly eroded by near-record-cheap gasoline, much of it enabled by the explosive rise in U.S. fracking that Clinton supports (and Sanders opposes). [NB: Link in preceding sentence was added in June 2016.]

It’s not that Obama’s actions that Clinton has latched on to aren’t useful. Rather, they don’t go nearly far enough. As Sanders pointed out, “we have a crisis of historical consequence here, and incrementalism and those little steps are not enough.” Nor do they create a policy template for the rest of the world. Outside of Western Europe and perhaps Japan, no other countries possess the bureaucratic machinery to administer the stupendously complex regulations that Clinton touted Thursday evening, and which apparently constitute the limits of her climate vision. While a carbon tax brings its own challenges of transparency and accountability, those now appear manageable in the wake of the Paris climate accord, to which nearly two hundred nations will formally commit at the UN this coming Friday.

To be clear, Clinton is correct that President Obama has accomplished — through creative and steadfast presidential fiat — most of what was possible in the face of implacable Republican opposition. But were she to be honest with herself, she would admit that it’s not nearly enough, especially with emerging revelations leading Scientists [To] Warn of Climate Peril Within Decades, Not Centuries, as the New York Times put it last month.

And were Clinton to seek to inspire Democratic voters, and indeed, the clear majority of Americans who have come to support carbon taxes, provided they’re made economically fair,  she wouldn’t be ducking Sanders’ (and the moderator’s) questions about them. She would be vying with Sanders to see who can fashion the most effective and appealing carbon tax and who can best persuade the American people to demand Congress pass it.