To view the latest census data on U.S. household incomes is to marvel at — and be appalled by — the unequal distribution of income in America.

In 2016, according to official data released last month, the lowest-earning one-third of U.S. households received just one-twelfth of total money income, which the Census Bureau defines as “the arithmetic sum of money wages and salaries, net income from self-employment, and income other than earnings.”

At the other end of the scale, the top 7 percent earning households — those with incomes of at least $200,000 — pulled in 27 percent of U.S. income last year. Note the symmetry: those at the top earn four times their pro rata share, while those in the broad bottom earn only one-fourth of theirs.

Stark as these figures are, they don’t capture the full extent of the wealth gaps — the one between the rich and the middle class, and the other between the middle and the poor. These gaps accumulate over generations, as the New York Times noted this week in its trenchant dive into the data, Bump in U.S. Incomes Doesn’t Erase 50 Years of Pain.

These disparities underlay Bernie Sanders’ “political revolution” campaign for the Democratic presidential nomination last year. And they added fuel to the sense of white grievance that energized Donald Trump’s successful run for the presidency. They also bolster the case for “carbon dividends” — the idea of distributing all or nearly all carbon tax revenues equally to U.S. households popularized as carbon fee and dividend by the non-partisan Citizens Climate Lobby (CCL), and more recently advanced by the Republican-led Climate Leadership Council (CLC) under the rubric of carbon dividends.

Using incomes as a proxy for carbon emissions — a rough approximation but a reasonable one, given income-based differences not only in using electricity, gasoline and heating and aviation fuels but also carbon embodied in making and shipping consumer goods — we’ve used the census data to estimate that if all carbon revenues are returned to the public, nearly two-thirds (66 percent) of U.S. households will take in as much or more money in the form of carbon dividends as they would pay out in higher fuel and goods prices due to carbon taxes.

Our figure jibes with the U.S. Treasury Department’s finding in its Jan. 2017 report, Methodology for Analyzing a Carbon Tax, that the lowest seven income deciles will be net beneficiaries of a carbon dividends plan (see Table 6) . Our estimate of the share of U.S. households that will be net beneficiaries under carbon diviends, 65.9 percent before rounding, is up slightly from our prior 65.1 percent “better off” finding based on 2012 incomes. Among those 65.9 percent, which encompass 83 million households, the average gain (carbon dividend netted by carbon tax expense) per $100 billion in total carbon revenue is $415 per year.

While that net gain may seem small — just $8 per week — the revenue amount on which it’s based corresponds to a very modest carbon tax, around $23 per ton of CO2. A robust carbon tax that climbed to a level several times higher would generate correspondingly larger net dividends for the benefiting households. Moreover, the more indigent the household, the greater its estimated net gain.

The breakeven household income point is a shade over $85,000, a level 45 percent greater than the 2016 median household income of $59.000; “typical” households will be net gainers if their income is less, and losers if more. Of course, if the share of carbon revenues dedicated to revenue return is reduced, the percentage of households kept whole under carbon fee and dividend shrinks as well. Our calculations suggest that around two-thirds of carbon revenues must be returned as dividends in order for half of households to have their carbon tax fully offset. (See line chart below.)

A conundrum for the climate movement

The ability of carbon dividends to lift incomes of the bottom half or more of U.S. households creates a conundrum for the climate movement, especially now that Republicans, who traditionally align with capital and wealth, are beginning to sign up for carbon dividend proposals. 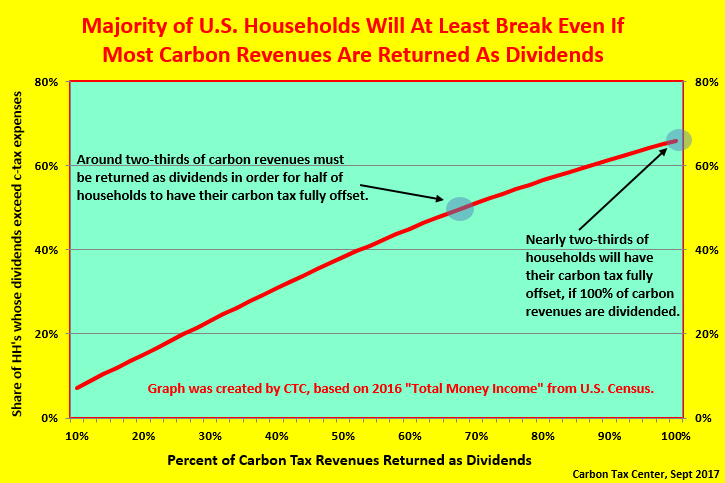 The progenitors of CLC’s carbon dividend plan, James Baker and George Shultz, are “exemplars of the outcast center-right GOP establishment,” as I described them recently in the Washington Spectator. At least as impressively, 28 current GOP U.S. House members have joined CCL’s Climate Solutions Caucus and thus signaled their possible openness to a carbon fee that reserves carbon revenues for dividends instead of applying them to cut corporate income taxes.

Yet many on the left are insisting that carbon revenues, or at least a large share of them, be invested in government-administered or financed clean-energy development and transportation infrastructure, especially in so-called frontline communities. Because each dollar of carbon revenue can’t be spent twice, the competing demands of carbon dividends vs. “just transition” proposals threaten to divide the climate movement — as they already did in last fall’s divisive I-732 carbon-tax referendum in Washington state, which I reported this past winter in The Nation magazine.

Ironically, it’s possible (indeed, I believe it’s likely) that allocating carbon revenues to dividends would more reliably benefit low-income families more than would spending the revenues on sustainable energy and transportation. Considering further that revenue-neutral dividend approaches might eventually garner meaningful support from some Republicans, it seems self-defeating for left-leaning or other climate advocates to reject them out of hand.

For our part, CTC supports any viable carbon tax proposal, revenue-neutral or not, provided it would not demonstrably exacerbate economic inequality or other social injustice. Thus far we have refrained from endorsing the American Opportunity Carbon Fee Act introduced in July by U.S. Senators Sheldon Whitehouse (D-RI) and Brian Schatz (D-HI), pending analysis of the regressive aspects of its proposed tax swap to reduce the corporate tax rate to 29 percent, from 35 percent, among other provisions.

That said, crunch time is coming for carbon dividend apostles. If the late summer hurricanes that have ravaged southeast Texas, Caribbean nations and much of Florida won’t induce Republican office-holders to spurn their party’s denialist orthodoxy and embrace revenue-neutral carbon taxing, it’s fair to ask if they’ll ever push for genuine climate solutions.