The Guardian and Atlantic pieces are connected, and not just because both of them ran today. There’s also a through-line from the first to the second, as we show here. 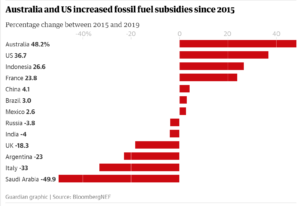 From the Guardian’s July 20 story castigating fossil fuel subsidies. Don’t be fooled by the top two bars — the scary-looking increases are tiny, in dollar terms. Meanwhile, France, shown with a nearly 24% increase, actually dropped its FF subsidies by 22%, from $29.6 bn/year to $23.2 bn!

The Guardian piece, by environment editor Damien Carrington, carried the aggro headline, “‘Reckless’: G20 states subsidised fossil fuels by $3tn since 2015, says report.” And it led with the dramatic graphic at left.

The two bars of shame at the top belong to Australia, which increased its fossil fuel subsidies by 48 percent in 2019 over 2015, and the U.S., with a nearly 37 percent boost. Cue the breast-beating that the world might make real headway on solving the climate crisis if rich nations would simply pull their bloody fossil-fuel subsidies.

But what if we told you that in the terms that really count — dollars — those whopping percentage increases in FF subsidies amounted to a mere several billion: $2.4 billion for Australia (from $5.0 bn in 2015 to $7.4 bn in 2019 — that’s the 48 percent bump), and $4.0 billion for the U.S. (from $11.0 bn to $15.0 bn), according to the country-by-country subsidy figures in the new Bloomberg-NEF Climate Policy Factbook that prompted the Guardian story?

Graphs from the Bloomberg-NEF report show that the combined increase in Australia’s and the U.S.’s FF subsidies was a paltry $6.4 billion.

Here’s the context: the real fossil fuel subsidy — the failure to price carbon emissions to capture even a small portion of their climate and health damages — amounts to around $40 billion a year for Australia and $500 billion for the U.S. Those figures, computed on a conservative carbon price of $100 per metric ton, dwarf the respective governments’ “fossil fuel support” by factors of more than 5 (Australia) and more than 30 (U.S.). 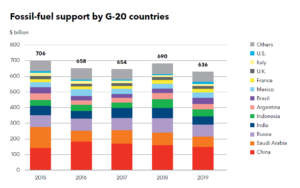 What FF subsidies actually look like, per the Bloomberg-NEF report: Damaging and indefensible, but far from a key driver of the climate crisis. Note also the tiny height of the U.S. bar and the absence of Australia, whose $7.4 bn subsidy would be a mere speck.

To be sure, government supports for fossil fuel development, in the form of grants, targeted tax abatements, loan guarantees and the like, are destructive to both economic fairness and climate protection and should be zeroed out at once. The 10 percent drop since 2015 in such subsidies by the G-20 countries, which together account for nearly three-fourths of global carbon emissions, according to the Guardian, isn’t remotely steep enough.

But to act as if these supports are the root cause of the world’s emissions profligacy is to badly misread the facts. The G-20 nations pump out around 24 billion metric tons of CO2 annually while pricing this pollution at an aggregate average carbon price of just a few dollars a ton. The absence of a $100 per metric ton carbon price thus constitutes a “subsidy” of $2.4 trillion a year, nearly quadruple the $636 billion in G-20 governmental support for fossil fuels in 2019 shown in the graph directly above.

The heading above is what led Robinson Meyer’s Atlantic column today, pegged, as Morrissey might have sung, to nothing in particular, except, perhaps Meyer’s interest in clicks. (I can confirm receiving a bunch of notices from CTC supporters.)

“The [carbon tax] death,” Meyer intoned with mock gravitas, “was confirmed by President Joe Biden’s utter lack of interest in passing it.” Leave aside that the Biden White House would have to be certified insane to pursue a carbon tax in 2021, with paper-thin House and Senate majorities and an overriding need to cultivate popular support to ward off the usual midterm attrition.

Indeed, we said as much in our post Playing the Long Game for Carbon Fee-and-Dividend back on April 2, in which we applauded Biden and Co. for steering clear of a carbon tax in order to build legislative accomplishments that could grow the Democrats’ congressional majorities and possibly enable a carbon tax in 2023. We were followed a week later by Ezra Klein in the New York Times (“Biden and his team view the idea that a carbon tax is the essential answer to the problem of climate change as being so divorced from political reality as to be actively dangerous.”)

Meyer is right, however, that carbon taxing “won few friends on the right or left” — for reasons we’ve lamented and detailed in separate, comprehensive write-ups in the “Politics” section of our website, having to do with Conservatives, Progressives, and pursuit of Environmental Justice.

Meyer was gracious, at least, to refer in his headline to carbon taxing as a “beloved policy.” Though what should make it beloved to climate advocates of all stripes isn’t its vaunted economic efficiency but its unique capacity to make huge dents in fossil fuel use in a short period of time. The efficiency of carbon pricing, though an aspect of that, isn’t the point.

And more helpful would have been for Meyer and other climate pundits to do what we’ve attempted here: to put the lie to the idea that removing fossil-fuel subsidies would go a long way to reducing carbon emissions and slowing the climate crisis. That could have — and might still — help climate campaigners focus on the true subsidies solution: to directly, massively and equitably tax carbon and other greenhouse gas emissions.