Barely twenty days after signing his $1.9 trillion American Rescue Plan to provide pandemic relief and wrestle Covid-19 to a halt, President Biden this week unveiled a follow-on eight-year $2 trillion plan that he called a “once-in-a-generation investment in America” to repair failing roads and bridges, revitalize rail travel and freight, get rid of water-supplying lead pipes, and generally overhaul the country’s infrastructure.

While a New York Times headline framed Biden’s American Jobs Plan as “stressing jobs, roads and growth,” the paper’s own explainer was sketching a different — and lower-carbon — story. Of $621 billion in transportation spending, less than 20 percent, $115 billion, goes to “roads and bridges,” and much and perhaps most of that appears destined for “fix-it-first” repairs rather than traffic-inducing highway expansions. (See graphic.) Public transit and railways get a combined $165 billion, and word is that some of the $20 billion penciled in for “underserved communities” is to pay to tear down segregation-enforcing urban expressways. 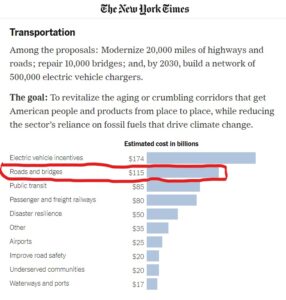 Roads and bridges get less than 20% of Biden’s transportation investments, and much of that is for repairs, not expansions.

The devil is in the details, of course, as Streetsblog USA noted today, with links to detailed treatments in Vox, Politico and Transportation for America. Notably missing from the new Biden package, though, is a carbon tax, or a carbon price in any form. The Biden infra plan is all carrots and no sticks, meaning it may not make much headway in reducing carbon emissions, at least in the short term.

We’re at peace with that, at the Carbon Tax Center. Razor-thin House and Senate margins simply don’t allow for hot-button measures like carbon pricing that might jeopardize other elements of the package in addition to failing on their own. Biden’s task, as he knows full well, is to pass bold, progressive, popular legislation to help Democrats expand their Congressional majorities in 2022 and 2024 and give him a thumping second-term mandate to boot. Then, and only then, can he risk a carbon tax.

Syracuse University public administration professor David Popp spoke to this dynamic in another Times story earlier this week, Biden’s Lesson From Past Green Stimulus Failures: Go Even Bigger. “Spending money is politically easier than passing policies to cut emissions,” he noted. “Unless [spending is paired] with a policy that forces people to reduce emissions, a big spending bill doesn’t have a big impact. [But if that] sets up the energy economy in a way that it’s eventually cheaper to reduce emissions, it could create more political support for doing that down the road.”

When the time is ripe, what kind of carbon price?

The number of $1,400 stimulus payments issued by the Treasury Department has surpassed 125 million, according to a CNBC update on the American Rescue Plan. That’s in addition to 100 million or more stimulus relief checks last April that provided up to $1,200 for Americans earning less than $100,000 a year.

The vast majority of these payments have been made as direct deposits, a procedure so immediate and trusted that one elected official recently called such payments “political magic.” That accolade fits our own preference for the carbon fee-and-dividend method of taxing carbon, which returns all (or nearly all) of the carbon revenues to American households as direct payments made quarterly or even monthly.

As we’ve written previously (explainer here, policy/strategy here), carbon-fee-and-dividend has these powerful virtues: simplicity (explainable in a sentence), concreteness (money in your bank account), proportionality (the amounts deposited rise whenever the carbon tax level is raised), and progressivity (most low- and even middle-income households come out ahead). 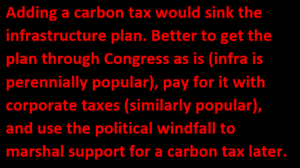 Depositing carbon revenues in people’s bank accounts makes fee-and-dividend quintessentially revenue-neutral. Where, then, will the money come from to pay for American Jobs Plan? President Biden’s answer is to boost corporate tax rates while also raising corporate tax “capture rates” by finally plugging special provisions and accounting tricks that last year enabled over 50 major U.S. corporations to go completely tax-free despite reaping billions in profits, according to a new report from the Institute on Taxation and Economic Policy.

A two-step strategy of (1) building green — or, at least, greener — infrastructure and paying for it by taxing corporate wealth, and (2) instilling carbon-cutting incentives in every cranny and capillary of the economy via a revenue-neutral carbon price, would follow the contours of the “New Synthesis: Carbon Taxing, Wealth Taxing & A Green New Deal” we sketched in Dec. 2019, shortly before the pandemic struck. The Biden plan does #1, and, if successful, could lay the foundation for tackling #2 after the midterms or the president’s re-election.

Clearly, we think carbon fee-and-dividend has legs, and we salute Citizen Climate Lobby for patiently and faithfully building grassroots support for it over the past dozen years. Nevertheless, even before this week’s unmasking of Florida Congressmember and Trumpista Matt Gaetz as a possible serial sex-offender (first salvo from Tuesday here, today’s latest, here) we were getting restive about the inclusion of Gaetz and other avowed-denialist House Republicans in the ranks of the Climate Solutions Caucus. 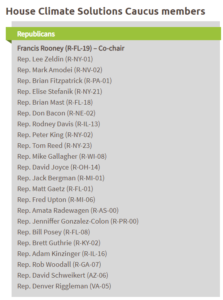 See any pro-climate reps in this list of Republicans? Neither do we. The list of caucus Democrats is longer and stronger.

CCL has touted the caucus since its inception as part of its philosophy to advance fee-and-dividend carbon pricing as bipartisan. Alas, that project has become increasingly dubious as Republicanism has come to require unflinching fealty to fossil fuels. For years now, few of the two dozen House Republicans who signed up for the caucus have so much as lifted a finger to warrant being considered climate solutions anything. (Several who did, such as Francis Rooney and Carlos Curbelo, both from Florida, either retired or were defeated for re-election.)

I have in mind two members from New York State: Lee Zeldin, from my native Long Island, and Elise Stefanik, who represents sparsely populated northern NY where my family has a cabin. Both are unreservedly Trumpian (voting to overturn the 2020 election, for example). Gaetz, even before this week’s unseemly revelations, was arguably the most Trumpian member of Congress, ideologically and culturally. Since entering Congress, none of the three have evinced interest in or support for carbon pricing.

The Carbon Tax Center calls on Citizens Climate Lobby to develop meaningful, transparent criteria for maintaining membership in the Climate Solutions Caucus. My concern here is not to keep undeserving caucus members from greenwashing themselves. They likely couldn’t care less; indeed, for them, anti-climate is probably a badge of honor to wear in their next primary campaign.

Rather, we at CTC believe that removing climate deniers from the Climate Solutions Caucus could help rehabilitate carbon taxing in the public conversation. As it now stands, letting anti-climate ideologues remain in a “climate solutions” body makes it easier to cast carbon-tax proponents as easy marks — gullible Charlie Browns waiting in vain for the G.O.P. to share the carbon-tax football.

In our opinion, any leverage that Citizens Climate Lobby might gain from continuing to seek bipartisanship is more than offset by the perception — which has only risen since the Capitol insurrection — that pursuit of climate partnership with Republicans is a fool’s errand.