The real fossil fuel subsidy is the absence of carbon pricing.

Much public discourse about climate in recent years has settled on the idea that the global fossil fuel industry is being propped up by “massive fossil fuels subsidies.” The corollary, widely voiced by climate activists and in pro-climate media, is that terminating those subsidies is the climate’s low-hanging fruit. Take them away, the argument goes, and extraction and use of coal, oil and gas will collapse and be replaced by renewable energy. 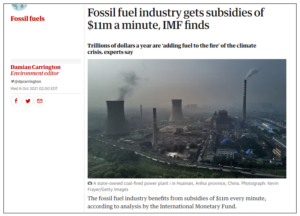 From The Guardian, Oct 6, 2021, which calculated $11 million a minute by dividing the International Monetary Funds’s $5.9 trillion annual “subsidies” figure by the number of minutes in a year. But taxpayer supports are only $600 billion of the $5.9 trillion total. The remaining $5.3 trillion are externality costs.

This belief, though mostly false, has legitimate roots in the long and painful experience of fossil fuels’ environmental and social destructiveness. Not just climate destabilization but “local” air pollution, which kills millions around the world each year; road traffic crash deaths enabled by petrol-fueled cars and trucks (more millions of deaths); and fossil fuel extraction that damages Indigenous lands, often irreversibly, are all massively “underpriced” — a phenomenon that CTC founder Charles Komanoff, among others, helped document as long ago as the 1990s, in journal articles like this one for the Pace Law School Environmental Review.

Unfortunately, beginning in 2015, the distinction between fossil fuels’ externality costs (huge) and taxpayer subsidies (modest) has been badly blurred by a series of influential reports by the International Monetary Fund. As we show below, these reports lump the two categories of price distortions together under the “subsidies” banner. 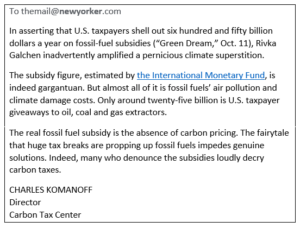 Actually, the IMF reports, which are meticulous and invaluable, make the distinction fairly clear, but primarily in the fine print. But the reports’  topline statements about $5 and $6 trillion subsidies invite confusion or misrepresentation, especially at the Guardian newspaper. Its headline at left, from October 2021, is the latest in a long string misleadingly casting fossil fuel damages as giveaways to industry.

Surprisingly, the New Yorker magazine fell into the same trap in the same month, with this offhand but distorting remark in an article about prospects for fusion power:

This year, the U.S. government will spend some six hundred and seventy million dollars on nuclear fusion. That’s a lot of money, but six hundred and fifty billion—the amount the I.M.F. estimates that U.S. taxpayers spent on fossil-fuel subsidies last year—is quite a bit more.

Wrong, as we argued in a letter to the editor that didn’t make it into print, shown above.

The chart below is from the most recent IMF report on fossil fuel subsidies, published in 2021 and based on 2020 data: 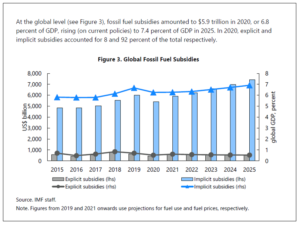 A correct reading of the IMF reports is that ending direct subsidies to fossil fuels, while long overdue, will barely dent the climate crisis.

Here’s how we framed the matter earlier this year (2021):

A related construct is that the U.S. and other countries massively subsidize the extraction and supply chain for fossil fuels. These subsidies are sometimes said to be why coal, oil and gas still dominate energy supply at the expense of efficiency, wind and solar. According to this view, eliminating these subsidies — which ought to be easier politically than enacting a robust carbon tax — should take center stage in efforts to reform energy pricing and markets. 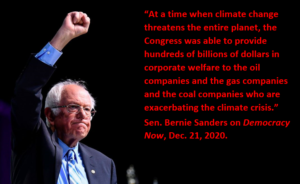 To take one example more or less at random: In a speech on the Senate floor in December 2020, Vermont’s Bernie Sanders decried the “hundreds of billions of dollars” in corporate welfare given to fossil fuel companies. (The clip, from Democracy Now! on Dec. 21, starts at around 19:25.) Yet in the United States, direct governmental support of fossil fuel exploration and production appears to be only around $22 billion a year.

While that is no small amount, it translates to a mere few percent of “end user” expenditures on fossil fuels; accordingly, taking away the $22 billion largesse, though a financial blow to the fossil fuel industry, would trigger only a few percent rise in fossil fuel prices — not nearly enough to fundamentally alter the market equations that still favor fossil fuels over renewables in much of the energy sector.

The same is true worldwide. The clearest and most comprehensive worldwide examinations of fossil fuel subsidies are a report, Counting the Cost of Energy Subsidies, and a “working paper,” How Large Are Global Energy Subsidies, both published in 2015 by the International Monetary Fund. The two IMF documents broaden the conventional definition of monetary “subsidies” to include fossil fuels’ massive externality costs — impacts on human health and climate — along with government spending to prop up their fossil fuel sectors. 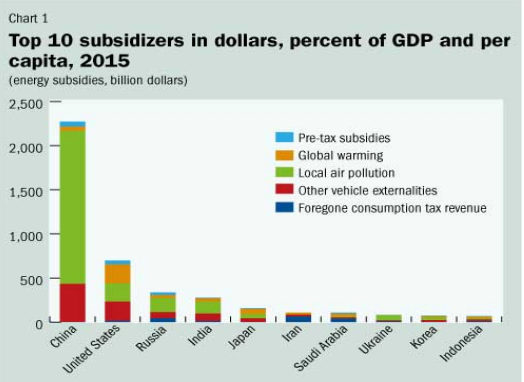 From IMF report, “Counting the Cost of Energy Subsidies”

The IMF graphic at right conveys at a glance that the absence of a charge for the harms caused by burning coal, oil and gas is a far greater factor in suppressing fossil fuels’ market prices than are taxpayer-funded subsidies. The remedy — the means to charge for those harms — is, of course, an explicit carbon tax.

Unfortunately, branding dirty energy’s pollution damages as a subsidy is now widespread. This, from a New York Times review of new climate-crisis books in April, 2019, is typical:

One prospective technique to scrub carbon from the atmosphere would cost $3 trillion a year, a colossal amount — but significantly less than the current level of subsidies paid out globally for fossil fuel, estimated at $5 trillion.

No, pre-tax subsidies “paid out globally for fossil fuel” at the beginning of the prior decade were only around $330 billion a year, or one-fifteenth of the $5 trillion total, according to the IMF (see p. 17 of the fund’s 2015 Working Paper). The rest was externality costs: climate harms, pollution harms, and other damages from underpriced automobile use; the antidotes to which, of course, are carbon taxes, other pollution taxes and road pricing.

The International Monetary Fund has updated its 2015 subsidies report several times, most recently in a Sept. 2021 working paper, Still Not Getting Energy Prices Right. The key takeaways from the 2015 paper remain: worldwide fossil fuel subsidies are enormous, and the vast majority of them are not “explicit subsidies” in the form of direct giveaways to fossil fuel companies, but unpriced externality costs:

Note that in its 2021 working paper the IMF employs a “social cost of carbon” of $60 per metric ton to reflect the climate damage from each additional metric ton of carbon dioxide — a considerably lower value than the $100/ton figure that the overly conservative Nobel laureate climate economist William Nordhaus endorsed in remarks earlier this year to the Washington Post. Yet even with that arguably low assumption, the fund concluded that “Efficient fuel pricing in 2025,” i.e., raising fossil fuel prices by the equivalent of $60/tonne, plus further adjustments to offset local air pollution damages, “would reduce global CO2 emissions 36% below baseline levels, which is in line with keeping global warming to 1.5 degrees (Celsius).” (IMF 2021 paper abstract).

Subsidizing clean energy will cut carbon, but not as much as a robust carbon tax.

Many believe that devoting tax revenues to support, commercialize and bring down the price of clean energy will enable the U.S. and other societies to transition quickly from fossil fuels. “No carbon tax needed,” according to this scenario; wind, solar and energy efficiency will out-compete fossil fuels in energy markets once they’ve been granted appropriate price supports to overcome initial hurdles to commercialization.

This idea has strong elements of truth. But we regard as wishful thinking the idea that subsidizing down the cost of clean energy can do more to push out fossil fuels than raising those fuels’ market prices through carbon taxing.

In broad terms, our view is that human appetites for energy are so boundless that, absent robust prices on carbon emissions, energy demand will outstrip the potential of even optimized and advanced solar and wind power systems. More analytically, in comments submitted to the Senate Finance Committee in 2014, we demonstrated that even a perfectly designed U.S. energy subsidy program — one that dismantled fossil fuel subsidies while buying down the price of renewable power and fuels — couldn’t compare in effectiveness to a carbon tax.