Australia, engulfed in flames, choking in smoke, a billion animals perished, once had a powerful climate solution by the hand: a carbon tax. The nationwide tax on fossil fuels was in effect for just two years, but what an impact it had, helping the country cut its carbon emissions while economic activity climbed unimpeded. During the carbon tax’s middle year, 2013, Australia’s CO2 to GDP ratio had its sharpest drop ever (see graph below). 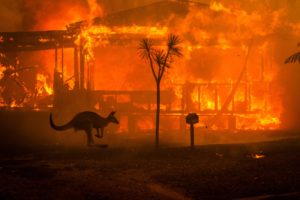 Australia stands apart, then, not just in the magnitude of its climate-charged horror but in deploying a climate-change antidote, only to lose it to a right-wing, coal-financed backlash. Not even Trump’s dismantling of the Obama pro-climate Clean Power Plan and auto-mileage standards, unsettling as it has been, stands out as cruelly as Australia’s renunciation of its carbon tax.

Unwanted child, stepchild, bastard child … Australia’s carbon tax was all of that. It took effect on July 1, 2012, the keystone of a deal between the Labor Party headed by incoming prime minister Julia Gillard and the pro-carbon tax Green Party, whose votes Labor needed to attain a majority.

As Australian journalist Julia Baird noted in a 2014 NY Times op-ed, Gillard’s earlier pledge to not tax carbon emissions and her “perceived lack of conviction in the policy itself” damaged the tax’s credibility and her own viability. The subsequent electoral victory of a “Liberal” (read: right-wing) government committed to repealing the tax led to its rescission on July 17, 2014.

Yet the tax appears to have performed brilliantly. With just two years of data, we can’t draw sweeping conclusions. Nevertheless, we have these ineluctable facts about the 24 months in which Australia taxed carbon emissions from all major sources except petrol-fueled transport:

As each day brings new stories of suffering from the terrifying temperatures (including a continent-wide average 107.4ᵒF on Dec. 18) supercharged by climate change, we can only speculate what might have turned out differently if the country hadn’t abolished its carbon tax in 2014. 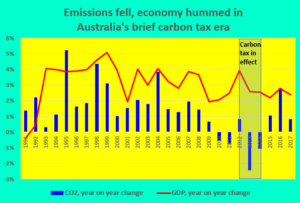 Calculations by author, from data posted by Australian Greenhouse Emissions Information System, Department of the Environment and Energy. CO2 figures include all sectors except Agriculture, Forestry & Fishing. GDP data are from World Bank and in constant US dollars.

For one thing, the 18 million metric ton rise in nationwide emissions since 2014 (to 2017, the last year for which the government has issued data) might have been averted if the carbon price signal had stayed in place. Emissions might even have shrunk if the tax had risen from its roughly $20 per ton level — and if the national government had embarked on a New Deal-style project to harvest the country’s vast solar and wind resources.

Even more, Australia’s action might have rippled through the world. The example of a proudly macho and avowedly hedonistic society explicitly pricing its carbon emissions could have turned heads, particularly in the United States, with its many cultural resemblances to Down Under. The fantasy of a land that produced Mad Max and Crocodile Dundee serving as a global role model for carbon taxing and reduction is delicious, though alas, no more than that.

Had Australia continued taxing carbon, British Columbia, the other English-speaking jurisdiction with an explicit carbon tax, wouldn’t have been dismissible as a unicorn. Carbon tax campaigners in, say, Washington state, whose voters considered but rejected a carbon tax in 2016, would have had more than one drum to pound. 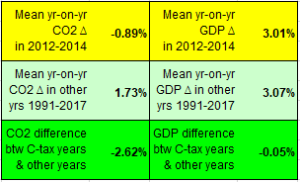 Stark difference in CO2 emissions between three years in which Australia’s carbon tax was in effect and rest of 1991-2017.

It could be said, of course, that Australia’s rescission of its carbon tax is merely one of a number of missed opportunities around the world to tackle climate change by transparently pricing carbon emissions. In an alternative U.S., influential left-greens like Van Jones, Naomi Klein and Food & Water Watch might have backed that Washington carbon tax referendum — or, at least, not lent their voices to the opposition. Earlier, at the start of the Obama presidency in 2009, U.S. “big green” groups could have thrown their weight behind straight-up carbon taxing rather than try to muscle the convoluted, Wall Street-friendly Waxman-Markey cap-and-trade bill through Congress.

But Australia’s fateful choice is harder to bear. A country of 26 million people didn’t merely pass up a potential opening six years ago; it turned its back on an actual, promising beginning by bringing to power a confirmed climate denier, Tony Abbott, who axed the tax in 2014 and just a month ago, as his country was becoming a cauldron, complained to an Israeli radio audience that the world was “in the grip of a climate cult.”

When summer ebbs and the fires and smoke recede, Australians should consider how and why they disarmed themselves in the fight to stop climate change; and then make a new start by reinstating a policy that, in the brief time granted, appears to have worked wonders.

For more on Australia’s carbon tax history, click here (the Australia section of CTC’s “Where Carbon is Taxed” page).