Most carbon tax proposals are standalone initiatives. They outline the level at which the tax starts, how fast it rises over time, how the revenue will be used — and not much else. Simplicity has its virtues, for both policy and political reasons. But in the United States, at least, this approach has been unsuccessful.

Carbon tax bills introduced in Congress have gotten as many as a few dozen sponsors — recently even a couple of Republicans — but nary a hearing, let alone serious consideration in committee, even when Democrats controlled one or both houses. Washington State voters turned down carbon tax initiatives in 2016 and 2018 (demonstrating in the process that use of the revenues doesn’t greatly affect political viability). For those who imagined the Climate Solutions Caucus could be the route to bipartisan support for a carbon tax, the cleaning-out of its GOP wing in the 2018 midterms was a body blow.

It was never a surprise that taxes, carbon or otherwise, revenue-neutral or not, would be a tough sell with voters and potentially toxic to politicians. But more than that, a carbon tax by itself, even a robust one, is no longer enough. 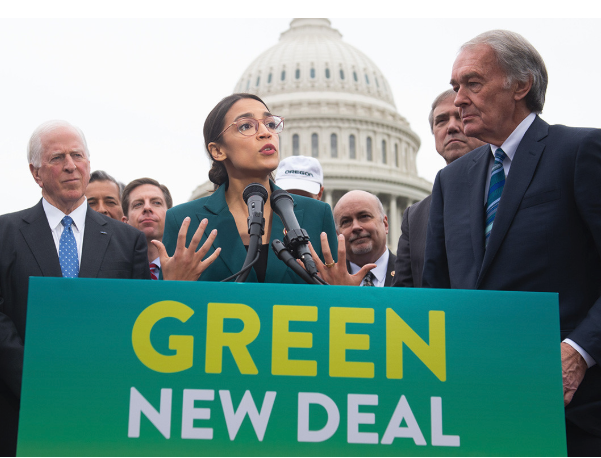 Last fall’s IPCC report on the impacts of a 1.5ᵒC warmer world found that the rate of carbon dioxide emissions must fall 40 to 60 percent from 2010 levels by 2030 to even come close to keeping the temperature rise that low.

If the U.S. had passed a robust carbon tax — one rising at say $10 per tonne per year — a decade ago, we would be on a path to approach that level today. But passing such a tax in 2021 and implementing it in 2022 — which is the earliest that could happen — might not get us much more than halfway to the 2030 goal. And passage even in 2021 is probably a long shot.

The takeaway is that any U.S. carbon tax today must be part of a broader set of policies to address all significant sources of greenhouse gas emissions. A solid roadmap for these policies is the new book by energy analyst Hal Harvey, Designing Climate Solutions: A Policy Guide for Low-Carbon Energy. Harvey and his team outline a suite of policies that “create a powerful symbiosis that can drive deeper carbon emission reductions than policies in isolation while increasing cost effectiveness,” including:

In an interview last fall with David Roberts at Vox, Harvey explained that carbon pricing is most effective in sectors like power generation where clean alternatives exist, but less so where the price signals tend to be swamped by other costs ( e.g., automobiles) or where they don’t necessarily reach the parties that can do something about emissions (think renters who pay the utility bills but don’t design, construct, or maintain the building):

The thing about carbon pricing is, it’s helpful, but it’s not dispositive. There are a number of sectors that are impervious to a carbon price, or close to impervious. A carbon price works when it’s part of a package that includes R&D and performance standards. It does not work in isolation. It helps, but it doesn’t do nearly as much as is required.

(Designing Climate Solutions is a rich lode of energy policy wonkery in the best sense. It notes that only 20 countries are responsible for 80 percent of carbon emissions and attacking emissions in a handful of sectors in those 20 countries can deliver a substantial down payment on the overall reductions we need. For more, see both the Roberts-Harvey interview and an extensive summary of the book. There’s also an online Policy Simulator that lets you indulge your inner energy czar.)

There’s also a powerful political argument for joining carbon pricing to a broader climate strategy: In the same way you can hide your dog’s pill in a morsel of meat, wrapping a carbon tax in a package of more popular initiatives — renewables, job-creating infrastructure investments, etc. — can help make the medicine go down. Fortunately, such a package is in the works. 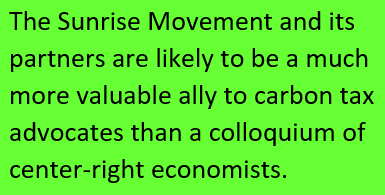 The Green New Deal means many things to many people, but the unifying concept is to position climate change mitigation as a retooling of the U.S. economy, particularly our infrastructure, with massive green investment and millions of green jobs. The closest thing to an official statement of purpose is H. Res. 109, introduced by Rep. Alexandria Ocasio-Cortez (D-NY) with 90 cosponsors and counting. Senator Edward Markey (D-MA) introduced a companion resolution in the Senate.

The resolution sees a Green New Deal as “a historic opportunity . . . to create millions of good, high-wage jobs in the United States” by investing in new infrastructure to replace our fossil fuel-based systems and industries. At a moment when economic inequality and economic anxiety have reached political critical mass on both left and right, Green New Deal proponents argue that addressing climate change can also address issues that voters care about more (while — at least for the moment — eliding the awkward question of where the money for all this infrastructure is going to come from).

There’s a surge of grassroots energy behind the idea, most of which appears open to a carbon tax as part of the whole. The Sunrise Movement and its partners are likely to be a much more valuable ally to carbon tax advocates than a colloquium of center-right economists.