Unicorn or Harbinger? A Republican Carbon Tax Is Readied for Debut.

“House Republican will introduce $23 climate fee next week.” That’s the headline of an article today in E&E News reporting that Rep. Carlos Curbelo, a two-term Republican representing Florida’s 26th Congressional District, is finalizing a bill that would impose a carbon-emissions fee on most U.S. fossil fuel-burning sectors and also eliminate or at least pause some federal regulations on climate change.

E&E calls Curbelo’s pending bill “a rare effort by a Republican to address global temperature increases by reducing greenhouse gases.” That’s an understatement. To the best of our recollection, the bill would be the first carbon tax proposed by a sitting G.O.P. Congressmember or Senator in roughly a decade. 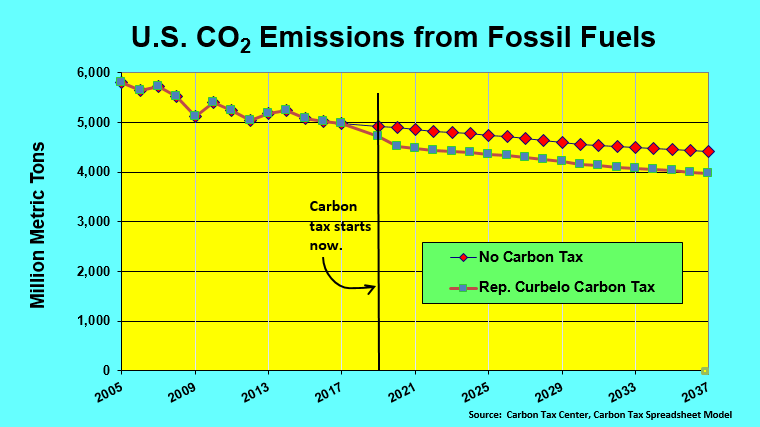 Any needle-moving from the Curbelo carbon tax would be in the political realm, not in direct emission cuts.

Politically, then, the appearance of Curbelo’s bill will be a big deal. In terms of straight-up carbon reductions, however, the bill is underwhelming. Our quick take from inputting the bill’s key elements into CTC’s carbon-tax spreadsheet model is that in 2020, U.S. CO2 emissions would be 22% below 2005 levels. To put that in perspective, actual U.S. emissions a year ago were 14% less than in 2005; thus, the 2020 bump from the Curbelo bill is at most 8 percentage points — less, actually, given the ongoing decarbonization of our electricity sector. (The Congressman’s draft fact sheet for the bill optimistically pegs the 2020 reduction at 24%.)

By 2032, the emissions drop from 2005 would reach 30% (per Curbelo) or 29% (per our modeling). But seeing as nearly half of that decrease was already in place without a carbon tax in 2017 — a year that is closer to the 2005 base year than to 2032 — the Curbelo proposal has to be seen as fairly thin on actual climate deliverables. Which is what one would expect from a carbon price that barely exceeds $20 per ton (the bill’s $23 starting price is per metric ton) and rises by only 2% a year above general inflation, although the bill contains a provision to ratchet up the increase if reductions fall short of specified targets.

Nevertheless, there’s a bigger picture to consider. Just yesterday we put up a post bemoaning the possibility that the anti-carbon-tax Scalise Resolution would pass, as it did in 2016, without a single Republican dissent. Now it looks like Rep. Curbelo is set to dissent in spades by shattering the decade-long G.O.P. prohibition against sponsoring or endorsing — let alone introducing — a carbon-tax bill.

If any D.C. Republican was going to take such a step, it was likely to be Carlos Curbelo. His 26th CD, extending from southwest Miami to the Everglades and covering the Florida peninsula’s entire southern tip, is a climate ground-zero twice over — sea-level rise plus hurricanes — and a classic swing district (it went blue by double-digits in the last two presidential races). A year after taking his seat in January 2015, Curbelo co-founded the bipartisan Climate Solutions Caucus with fellow Floridian Ted Deutch, a Democrat representing the 22nd CD. Whether by conscience or calculation or a combination of the two, Curbelo clearly read the handwriting and elected to break ranks with his party’s denialist orthodoxy.

The Curbelo bill itself is full of political calculation, which isn’t necessarily a bad thing. It would clear the books of the long-standing federal highway excise taxes — 18.4 cents per gallon of gasoline, 24.4 cents for diesel. The carbon tax, with its built-in annual increases, would more than make up the difference, though at the cost of a percentage point or two of economy-wide carbon reductions due to the diluting effect of the swap. The Highway Trust Fund would be a big net winner, receiving 70 percent of the entire revenue take. Whether that’s bad or good depends on whether the increased revenue is allocated to highway expansions or “fix-it-first” infrastructure repairs. 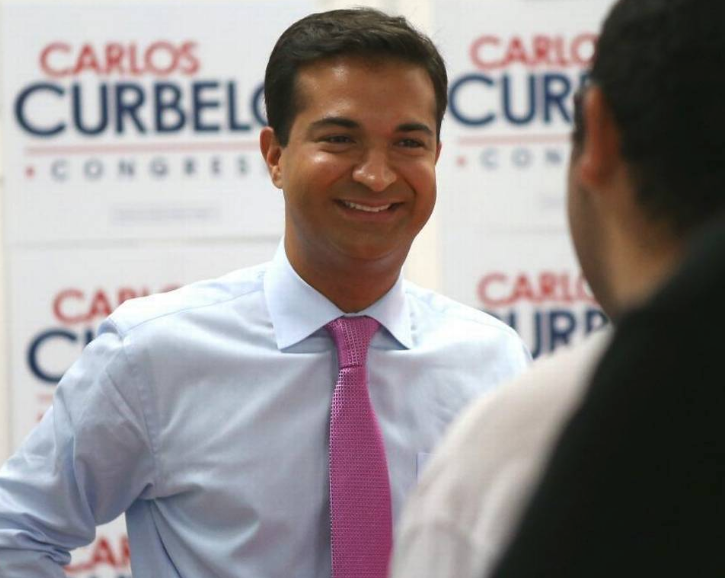 The bill stands no chance of passage this year, of course, or in almost any imaginable Republican-controlled Congress. Indeed, under the G.O.P.’s Hastert Rule, Rep. Curbelo would need 117 Republican co-sponsors simply to clear the “majority of the majority” threshold and get the bill to the House floor.

If Rep. Curbelo were a Democrat, we would be measuring his bill against Democratic carbon-tax proposals such as Rep. John Larson’s America Wins Act (HR 4209), whose carbon price starts at $49/ton and which devotes $1 trillion to infrastructure (plus transition assistance for coal country and a relatively small “dividend” for households), and which has a few dozen Democratic co-sponsors. And while the Larson bill’s 2%-plus-inflation price increase trajectory has the same slope as Curbelo’s, it operates on a much higher base and thus packs more punch.

But that comparison runs the risk of missing the point: that a “long national nightmare” of Republican silence and inaction on climate may be starting to end. Whether other G.O.P. lawmakers will stand with Curbelo remains to be seen. He is at least blazing a path, and for that he deserves our thanks.

CTC supporter and volunteer Bob Narus contributed research and ideas to this post.