The Climate Movement In Its Own Way

The Nation magazine today published my essay, The Climate Movement In Its Own Way. I’ve cross-posted it here to allow comments and offer context. 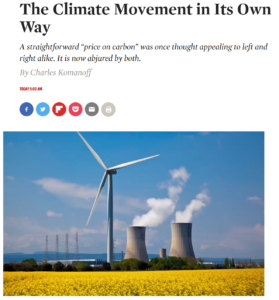 It’s a follow-on to my April 4 essay, also in The Nation, The Case Against Closing Nuclear Power Plants, which I posted here under the title, For Climate’s Sake, Don’t Shut U.S. Nukes.

[This post] implicitly embodies a hope that my willingness to examine my own deeply-held convictions in a new light may encourage others to do likewise with their own climate dogma. Reconsideration of ideologically-based objections to carbon pricing by self-proclaimed progressives would be a good place to start.

Consider today’s post an explicit expression of that hope.

PS: The new post had to be shoehorned into a tight word count. The version below restores a half-dozen phrases cut from the version in The Nation.

The Climate Movement In Its Own Way

After decades of critically documenting nuclear power’s outsize costs, I finally admitted to myself that the carbon benefits from continuing to run US nuke plants are substantial, and in some respects irreplaceable. I made the case for keeping them open in an April article on TheNation.com.

Closing New York’s Indian Point reactors last year was a climate blunder, I wrote. Not just because fracked gas is now filling the breach, but because the need to replace the lost carbon-free power means that new wind and solar farms won’t drive emissions down further. California, facing the same equation, should shelve its plan to shutter the Diablo Canyon nuclear power plant in 2024, I said.

“Total bullshit,” a lifelong anti-nuker wrote me. “You should be ashamed.” More representative of the comments, though, was this: “Continued reliance on nuclear power going forward now is part of the price of our collective past failures.”

Amen. The failures propping up US carbon emissions are multiple. Not just Senator Joe Manchin, who torpedoed President Biden’s Build Back Better clean-energy legislation. Not just the Senate Republicans, any one of whom could have cast the critical 50th vote. And not just Big Carbon, whose dark money and disinformation perpetuate climate inaction.

Through its own poor choices, the climate movement is failing as well.

Too many of our climate campaigns are ill-considered. Too much of our legislative agenda is narrow-gauged. Too often, our lens for assessing climate proposals is ideological rather than pragmatic.

Consider the decade-long campaign to induce pension funds and banks to divest their fossil-fuel holdings. Exxon-Mobil’s share price wobbled for years, but since early 2020 Exxon’s stock has risen faster than the market average. Is Big Oil shamed and starved for new capital today? Not with roaring demand for oil and gas. US motorists’ insanely over-powered, super-sized vehicles account for about a tenth of worldwide petroleum consumption. Yet challenges to American motordom come mostly from outgunned cycling and transit campaigners, not the climate movement.

Now, with most federal action blocked, climate activists sought and won a ban on gas heat in new buildings in New York City, though they failed in their first push for a statewide ban.

The drive to “electrify everything” is laudable, given that electricity can be decarbonized whereas gas furnaces and stoves cannot. Yet trying to take the ban statewide elbowed aside bolder ideas, such as legalizing accessory dwelling units and stopping highway widenings.

To be sure, not everyone is ready to admit that fatter highways and pastoral, exclusive suburbs are carbon disasters. But only broader campaigns can link climate to other pressing concerns like homelessness, housing unaffordability, costly gasoline, and traffic violence.

The granddaddy of US climate failures, of course, is the absence of the one policy that economists believe could unlock the vast emissions reductions needed to meet the Paris Agreement goal of limiting global warming to 1.5 degrees Celsius: national carbon taxation. 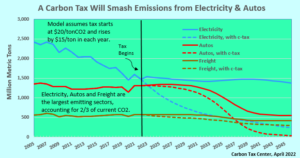 A robust federal carbon tax isn’t just the sharpest card in the climate policy deck. It’s like adding a whole new deck to the one we already have.

A straightforward “price on carbon” — administered not via easily gamed cap-and-trade schemes but through “upstream” levies on the carbon content of fuels — was once thought appealing to left and right alike. It is now abjured by both.

The right, of course, is both repellently all-in on fossil fuels and hyper-aware that its wealthy base of profligate carbon consumers would pay the most through a carbon tax. Which makes the left’s antipathy to carbon taxes not just surprising but downright bizarre.

This hesitation has multiple strands: seeing carbon pricing as another contrivance of the predatory capitalism that built white wealth off the land and labor of Indigenous and African-descended peoples; suspicion that carbon pricing lets polluters avoid reducing local emissions by purchasing “offsets”; a misplaced conviction that carbon pricing in California has worsened disproportionate pollution burdens on disadvantaged communities; and excessive faith that a regulatory approach can untangle the multiple strands that enforce fossil-fuel dependence.

Economic models abound to show how fast carbon taxes will shrink the use of fossil fuels. Models aren’t life, but they agree broadly that a robustly rising federal tax could, within a decade, dial back US emissions by about a third.

To turn our backs on carbon reductions on that scale is, I believe, suicidal.

Our worsening climate stalemate led me to abandon my silence as existing nuclear power plants were extinguished. A similar rethink on carbon taxes by progressives won’t win over climate denialists. In time, though, with a more far-sighted left ascendant, it could become a stepping stone to climate progress.