The Nation magazine this morning published my essay, The Case Against Closing Nuclear Power Plants. I’ve cross-posted it here to allow comments and offer context. 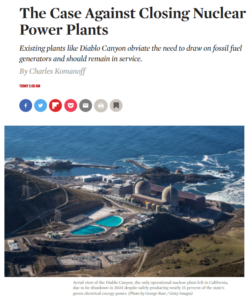 Use link at top of text to access the original version of this post in The Nation.

The piece had its genesis in a more expository post I published in 2020 in the NYC-based Gotham Gazette, Drones With Hacksaws: Climate Consequences of Shutting Indian Point Can’t Be Brushed Aside. In that essay, I dismantled the assurances of reactor-shutdown advocates that bountiful infusions of efficient and renewable energy will take the place of the nuclear-powered Indian Point plant’s carbon-free electricity. The problem wasn’t simply the slow rate at which new green energy is being added, but that when green energy sources must replace a standing power source that itself replaces fossil fuels, their effective climate value is zero.

I believe my essay in The Nation is noteworthy on several grounds.

First, it adds the weight of my long experience questioning nuclear power’s economic viability to a Feb. 1 letter from climate pioneer Jim Hansen, Nobel laureate and former U.S. energy secretary Steve Chu, and 77 other distinguished personages to California Gov. Gavin Newsom that, in effect, urged the state to avoid duplicating, on the West Coast, the grievous error of shutting a similarly questionably-sited reactor complex (Indian Point) on the East.

Second, the essay advances a more systemic view of the climate consequences of extinguishing extant zero- or low-carbon energy facilities whose operation is already keeping fossil fuels in the ground and carbon emissions out of earth’s atmosphere.

Third, it implicitly embodies a hope that my willingness to examine my own deeply-held convictions in a new light may encourage others to do likewise with their own climate dogma. Reconsideration of ideologically-based objections to carbon pricing by self-proclaimed progressives would be a good place to start.

On a bright spring day in 1979, before thousands who were propelled to Washington, D.C., by the Three Mile Island reactor meltdown, I pronounced nuclear power’s rapid expansion disastrously unaffordable. My remarks drew on years of work chronicling reactors’ skyrocketing capital costs.

Forty-three years later, in February, in the wake of the failed Glasgow climate summit, I wrote to California Gov. Gavin Newsom, urging him to defer the planned shutdown of the state’s last nuclear plant. Closing Diablo Canyon, a Reagan-era complex near San Luis Obispo, would damage the state’s climate leadership as it strives toward zero-carbon energy, I argued.

I sent my letter just days before Vladimir Putin’s tanks rolled into Ukraine and thrust nuclear power back in the news, in typical ambiguity.

On one side are legitimate fears that Russia’s seizure of the giant Zaporizhzhia reactor complex in southern Ukraine, the largest in Europe, and the stricken Chernobyl plant in the north, near Belarus, could precipitate massive releases of radiation.

On the other is the stomach-churning awareness that Germany’s reactor closures over the past decade deepened its dependence on Russian gas, helping keep the Kremlin supplied with Western cash while slowing its own progress to climate-safe energy.

In America, meanwhile, the nearly one hundred nuclear plants that have ridden out the post-Three Mile Island cancellations and post-Fukushima shutdowns operate under the radar, their climate and pocketbook benefits taken for granted. It’s time we paid attention. 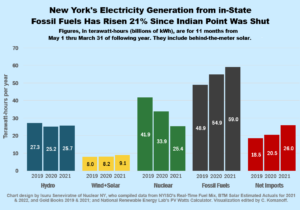 The climate crisis demands that NY’s electricity supply from fossil fuels shrink rapidly. Since Indian Point was closed, it has risen 21 percent.

Electricity rates in New York City were jackknifing even before Russia’s assault on Ukraine. The blame is falling on spiking prices for fracked natural gas. Left unsaid is that, as in Germany, the closure last year of the area’s lone nuclear plant, Indian Point, is making utilities draw more heavily on the very gas-fired generators whose costs are spiraling. Also largely unremarked, amidst hosannas over wind and solar power’s falling costs, is the halting pace at which green power is actually filling the breach, belying promises by “safe energy” advocates who helped engineer Indian Point’s closure.

Worse, it is illusory to say that by ramping up renewable energy and energy-efficiency we can pick up the climate slack from closing Indian Point. Why? Because with climate chaos bearing down, every green-energy addition needs to bring about the demise of equivalent fossil fuels. If those additions replace a standing power source that itself replaces fossil fuels, their climate value is zero.

These considerations dim the glow from last month’s record leases for ocean wind farms off Long Island and New Jersey. The need to make up for Indian Point’s energy output will nullify half or more of the hoped-for 7,000 megawatts of offshore wind, badly undermining the legislative commitment to rid the New York grid of carbon emissions by 2040.

On the opposite coast, the twin Diablo Canyon reactors have for decades provided 2,200 megawatts worth of round-the-clock climate benefit by obviating the need to draw on fossil fuel generators. Shutting them down by 2025 will relegate California’s next 7,000 megawatts of renewables and efficiency (the higher figure is from differences in operability) to stand-ins for Diablo’s lost climate benefit.

The deficit won’t be transitory. Not until every kilowatt on the West Coast comes from zero- or ultra-low-carbon sources can Diablo’s canceled climate benefit be considered superfluous. Until then, the California grid will continuously emit more carbon than it would with Diablo operating.

That moment is approaching but it remains far away. According to data from the US Energy Information Administration, 50 percent of California’s electricity still comes from burning carbon fuels. Hearteningly, this share is 12 points less than it was in 2015, with most of the carbon shrinkage coming from increased solar-photovoltaic supply. But that solar rise, amounting to more than 15 billion kWh annually, is no greater than the amount of carbon-free electricity that shutting Diablo Canyon will take away (17 billion kWh a year, based on 2016-2020 production).

We cannot assume that California’s next solar wave will replace Diablo’s climate benefit, for the simple reason that those solar gains are counted on to push out fossil fuel-burning in buildings, vehicles, and the state’s power grid.

I can hear the objections. Diablo Canyon needs to run at full bore, whereas demand fluctuates. But any excess output can be put to use recharging the millions of batteries California is adding to anchor its grid. Diablo lies atop an earthquake fault. But much of its huge sunk cost went for unprecedented seismic protection that the plant’s owner, Pacific Gas & Electric, failed to budget. (I know this from serving as an expert witness for the California Public Utility Commission’s Division of Ratepayer Advocates in the 1989 proceeding that barred the company from fully recovering its cost overruns.) Guarding Diablo against mishaps or malfeasance takes money. But going forward, the cost of staffing and fuel will be much less than the climate damage its operation prevents.

As an energy-policy analyst, advocate, and organizer for fifty years, I have fought for bicycle transportation, congestion pricing, wind farms, and carbon taxes, in large part to reduce the destructive imprints of coal, oil, and gas.

The climate crisis has exploded ahead of schedule, not as distant warnings but as actual fires, floods, and the global sea-level rise. Meanwhile, Diablo and other US nuclear plants long ago shed their teething problems to become solid climate benefactors, faithfully churning out electricity without combusting carbon fuels.

Others can debate whether to build new nuclear plants to combat the climate crisis. But no one can deny that letting existing reactors like Diablo Canyon remain in service keeps fossil fuels in the ground and their carbon emissions out of our atmosphere. We ignore that benefit at our peril.

Note: The day after posting this, I talked about my Nation article with Left Business Observer’s Doug Henwood on his weekly podcast. (My part starts at 30:18 and goes for a little over 20 minutes.) The conversation is lively and adds further context to the importance of and rationale for continuing to run functional U.S. nuclear power plants.