New Senate bill would price CO2 at $54/metric ton and tax some particulates, SO2, NOx

This post was updated, and its headline slightly altered, on July 13, 2021.

The Save Our Future Act (101-page downloadable pdf) prices CO2 emissions at $54 per metric ton, equivalent to $49 per U.S. (short) ton, starting in 2023, with the price rising each year by a percent equal to 6 percentage points on top of the rate of general inflation.

The bill also proposes to charge emissions of fine particulates, nitrogen oxides and sulfur dioxide from qualified “major sources” (a legal term defined at 42 U.S.C. 7661) located within a mile of any environmental justice community (see definition  and discussion further below). In addition, a border adjustment mechanism would prevent carbon leakage and ensure fairness for U.S. manufacturers, according to a press release from Sen. Whitehouse’s office, while an “environmental integrity mechanism” would raise the charges on CO2 and other greenhouse gases if needed to keep shrinking emissions fast enough to meet a 2050 net zero target.

The Whitehouse-Schatz bill pushes the envelope of carbon tax legislation. The starting price of $49/ton — pegged to OMB’s conservative estimate of the social cost of carbon — represents a new high. So does the annual increase rate of general inflation plus 6%. Both figures surpass the Climate Leadership Council’s long-standing proposal to start pricing CO2 at $40/ton and raise that price 5% faster than annual inflation (to be fair, the council’s 2017 price base translates to $45/ton or more in 2023, the Whitehouse-Schatz bill’s start year). 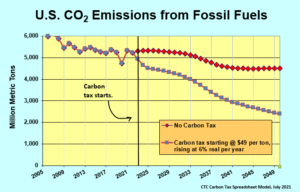 Modeling by CTC suggests the Save Our Future Act will cut CO2 34% below 2005 levels in 10 years (without counting ancillary charges on PM-2.5, SO2 and NOx).

We ran the CO2 price in the Save Our Future Act through CTC’s carbon tax model (which you may download via this link). The results, shown above, indicate that the bill won’t fulfill its stated objective to cut carbon emissions in half within a decade, though, to be fair, our modeling doesn’t reflect additional impacts from the prices on the three localized pollutants. Nor does our model capture the likely low-hanging fruit of curbing emissions of methane and other greenhouse gases.

Still, the price-compounding built into the bill limits its efficacy somewhat; even the unprecedented proposal to raise the rate 6% faster than inflation doesn’t boost the price nearly as fast as a straight-up $10/ton annual increment. (Simple math suggests that, with 2% annual inflation, the price won’t spin off annual increments of $10/ton or more until it has reached $125/ton.)

How carbon revenues are used has become central to carbon taxing’s equity and politics. The following four bullet points, taken from the Whitehouse press release, summarize the Save Our Future Act’s proposed treatment:

Provisions #1 through #3 together would absorb around $500 billion over the law’s first decade, out of the total $4 trillion in revenue that CTC’s model indicates the Save Our Future Act will generate during that time. The difference between those figures — some $3.5 trillion total — pays for the dividend checks noted in provision #4.

The proposed allocation of the vast majority of revenues to the dividends presumably is what delivered support from Citizens Climate Lobby, the national grassroots organization that for the past decade has relentlessly pursued the idea of returning carbon-tax revenues as dividends to U.S. households. Provisions 1 through 3 clearly are designed to win backing for the bill from justice-oriented climate advocates.

Environmental justice is also evident in the bill’s novel proposal to charge for emissions of fine particulates ($38.90/lb), NOx ($6.30/lb) and SO2 ($18/lb), with those prices rising at the rate of inflation, from qualified “major sources” (a legal term defined at 42 U.S.C. 7661) located in or no more than a mile from an environmental justice community. Our preliminary calculations suggest that all fossil-fuel power stations 25 megawatts or larger, even those with modern combined-cycle technology burning methane gas, would meet the statutory criteria, provided they are sited directly proximate to a community of color.

Other large stationary polluters such as oil refineries, chemical plants and perhaps oil and gas extraction and processing facilities might also qualify. (We are awaiting details from Sen. Whitehouse’s office.) We estimate that coal-fired power plants would be charged for their “local” pollutants at a rate averaging around 5 cents per kWh generated, a fee that would effectively duplicate (i.e., double) the direct impact of the initial $49/ton carbon tax. Gas-fired power generators, in contrast, would pay only around 2/10 of a cent per kWh, on account of their sharply lower emission rates for conventional pollutants, relative to coal. (You can see our assumptions and calculations in the Local Pollutants tab of our carbon-tax model.)

Prospects aren’t bright for the Save Our Future Act in the current Congress. The persistence of the Senate filibuster means that 60 out of 100 senators must approve the bill; yet opposition is virtually guaranteed from almost all 50 Republican senators along with Sen. Joe Manchin (D-WV) and perhaps a few other Democratic senators. Not only that, the Biden White House is unlikely to put its muscle behind the bill, for reasons we laid out earlier this year in our post, Playing the Long Game for Carbon Fee-and-Dividend:

Razor-thin House and Senate margins simply don’t allow for hot-button measures like carbon pricing that might jeopardize other elements of the package in addition to failing on their own. Biden’s task, as he knows full well, is to pass bold, progressive, popular legislation to help Democrats expand their Congressional majorities in 2022 and 2024 and give him a thumping second-term mandate to boot. Then, and only then, can he risk a carbon tax.

Still, let’s credit the Save Our Future Act for pushing the envelope on carbon taxing on the twin key fronts of tax design and revenue treatment. Kudos to Senators Whitehouse and Schatz for seeking support from a diverse set of environmental and justice campaigners. The bill underscores the importance of solidifying a pro-climate Congress to enable such forward-thinking bills to be seriously considered during the second half of the Biden term.