The Carbon Tax Center was founded in 2007 on the belief that the most direct path to decarbonize the world economy lay in enacting a robust U.S. carbon tax and replicating this policy across the globe.

A dozen years on, we are expanding our program around a new synthesis: a Green New Deal funded by taxes on extreme wealth — “taxing inequality,” you could say — and supported by a revenue-neutral carbon tax such as the fee-and-dividend approach espoused by Citizens Climate Lobby. 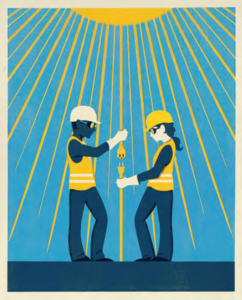 Illustration by Dan Bejar, from Harper’s magazine May 2019 cover story, “Where Our New World Begins: Politics, power and the Green New Deal.”

Here’s why: After decades of denialism by the right and antipathy from the left, we have reached a point where, standing alone, a carbon tax is too fraught politically and too weak economically to serve as the centerpiece of U.S. climate policy. We now believe that the path to decarbonizing the U.S. economy lies in a Green New Deal-inspired infrastructure and investment program funded by taxes on extreme wealth and supported by a carbon tax.

CTC envisions a three-part program to accomplish this:

Our Program Is Unique and Synergistic

Although others have advanced the three individual elements of our program, none have proposed them in combination. Our integrated treatment offers synergistic political and economic benefits:

This redirection is not an abandonment of carbon taxing. Far from it. Rather, we intend to situate carbon taxes in a broader framework that is suited to both the political dynamics and the climate emergency that will characterize the new decade, and beyond.

CO2-coin logo courtesy of Tommaso Sansone.Click here for a longer and more recent post outlining how we came to embrace this new synthesis.