Still they persist: 2/3 of voters in poll want carbon tax 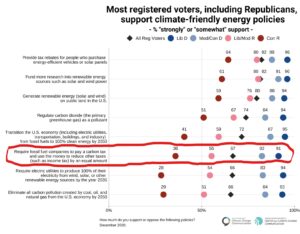 From the latest Yale Climate Communications opinion survey. Link to on-line version is in text above graphic. Link to full report is at the end of this post.

The 67 percent support level for a carbon tax is in line with responses to the same question in earlier Yale polling in Nov. 2019 (69%) and April 2020 (68%), and with complementary goals like “require electric utilities to go all-renewable by 2035” and “eliminate all U.S. carbon pollution by 2050.”

Unsurprisingly, it’s well short of the 82 percent approval for perennial favorites like expanding clean-energy research and giving consumers tax rebates for purchasing high-mileage cars and solar panels; taxes, even on pollution, don’t sell as well as research and giveaways. On the other hand, the 67 percent pro-carbon tax rating far exceeded “increasing federal subsidies for renewable energy” (55%) and “decreasing subsidies for the fossil fuel industry (49%).”

The persistence of support for taxing carbon emissions is notable in light of increased antipathy toward carbon pricing from the political left.

Last month, the environmental and climate justice movement, acting from its misplaced conviction that California’s carbon cap-and-trade program is exacerbating pollution hotspots in minority communities, blocked the prospective nomination of the state’s air resources chief to head U.S. EPA. (The movement’s criticisms of cap-and-trade also extend to carbon taxing, as we detailed in this September post.)

“The politics of carbon pricing just don’t seem to be going anywhere,” Roberts wrote last summer in At last, a climate policy platform that can unite the left, an ambitious post that propounded a three-pronged “Standards-Investment-Justice progressive rubric for climate policy. “Carbon pricing has been dethroned,” Roberts proclaimed, practically exulting over the idea that economists were having to cede the steering wheel to progressive activists, organized labor and environmental justice advocates.

Stokes is at the vanguard of rising young academics who disdain carbon taxing. “Carbon pricing has dominated conversations around climate policy for decades, but it is ineffective,” she wrote last September in The Trouble With Carbon Pricing, a lengthy essay in Boston Review. “Only a bold approach that centers politics can meet the problem at its scale.”

We rebutted Stokes and her co-author Matto Mildenberger in October. So did Joseph Majkut, climate policy director at the Niskanen Center, in an elegant blog post that we summarized here. Nevertheless, attacks on carbon pricing as ineffectual or unachievable (or both) continue to mount.

CTC’s carbon-tax model indicates that a steadily rising carbon tax that reaches triple digits (i.e., $100 per ton of CO2) within a half-dozen years would, a decade hence, be reducing U.S. CO2 pollution by around a third. Needless to say, that’s not what the U.S. Chamber of Commerce had in mind recently when it added this deliberately non-specific language to its Position on Climate Change:

The Chamber supports a market-based approach to accelerate GHG [greenhouse gas] emissions reductions across the U.S. economy. We believe that durable climate policy must be made by Congress, and that it should encourage innovation and investment to ensure significant emissions reductions, while avoiding economic harm for businesses, consumers and disadvantaged communities. This policy should include well designed market mechanisms that are transparent and not distorted by overlapping regulations. U.S. climate policy should recognize the urgent need for action, while maintaining the national and international competitiveness of U.S. industry and ensuring consistency with free enterprise and free trade principles.

To be sure, the Yale survey question doesn’t specify a carbon tax amount, for good reasons. Even if that degree of detail were warranted, it seems impossible to fashion a question that could illuminate the level without biasing the outcome. 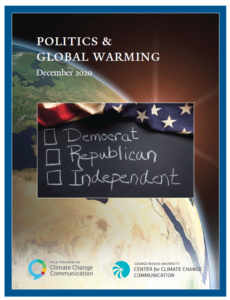 As you may have guessed, the carbon tax is the same in the two questions: $100 per ton of CO2. The framing, however, is quite different. We bet the second wording would poll 25 points higher than the first.

The Yale report, the latest in a series researched and written jointly with George Mason University’s Center for Climate Change Communication, has a wealth of polling results on nearly every conceivable aspect of climate change policy and politics. Such as this: About half of registered voters say the issue of global warming was important in determining their vote in 2020. (However, only 2% of voters ranked global warming as the single most important issue; for the rest it was “one of several important issues.”)

That’s on p. 33 of this intelligently conceived and artfully designed report, which you can download via this link.

Shortly after posting, we learned of a Jan. 12 report from Resources for the Future, The Climate Decade: Changing Attitudes on Three Continents (press release, here; full report, here), comparing 2019 vs. 2009 public opinion in Sweden, China, and the United States. Among the eight authors are the veteran RFF environmental economist Alan Krupnick and University of Gothenburg Professor of Environmental Economics Thomas Sterner.

From the Jan. 2021 RFF report, The Climate Decade: Changing Attitudes on Three Continents.

A big takeaway from the RFF report is an average “willingness to pay” to reduce CO2 emissions of $31 among U.S. respondents in 2019. Though that figure is less than the corresponding average in China and, especially, Sweden (see chart), it’s almost double the 2009 U.S. average of $18.

And while the $31 willingness to pay is far from the triple-digit carbon tax level CTC has been recommending for the past decade and longer, it almost certainly overstates the effective net cost of even a high carbon tax to U.S. consumers, on account of the ability of the carbon tax revenues to pay for social and economic benefits that would vastly lower the true net cost. Those benefits could be reduced payroll or income taxes (via a “tax swap”), lower economic and environmental costs from reduced use of fossil fuels, and/or direct payments to households via “carbon dividends.”

In short, a $31 per ton willingness by Americans to pay to reduce CO2 emissions actually signals support for high rates of carbon taxing.