Perhaps you saw our recent point-counterpoint dissection of Matto Mildenberger and Leah Stokes’ Boston Review article, The Trouble With Carbon Pricing. Both authors, political scientists at the University of California’s Santa Barbara campus, published books on climate policy this year — Carbon Captured: How Business and Labor Control Climate Politics (Mildenberger), and Short Circuiting Policy: Interest Groups and the Battle Over Clean Energy and Climate Policy in the American States (Stokes). Stokes has gained a devoted following in the climate movement for the flair with which she articulates a “standards-investment-justice” policy frame that relegates carbon taxing and other so-called “market mechanisms” to at most a subsidiary role. 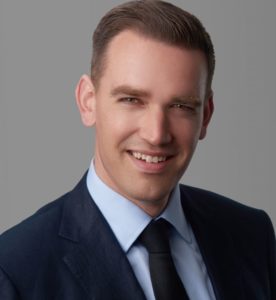 Niskanen Center’s Joseph Majkut. “With carbon pricing, the private sector will be chasing opportunity instead of compliance.”

In our post we rebuffed that “market mechanism” label. “Taxing carbon emissions has nothing to do with ‘markets’ and everything to do with fixing the enormous market failure that allows fossil fuel companies and monster-truck drivers and frequent flyers pay zero for climate pollution,” we wrote. We also called on the climate movement to “harness the growing fury at the ever-expanding wealth gap with a program to tax both extreme wealth *and* carbon emissions and invest the proceeds into the Green New Deal” — a program we outlined last year.

Now comes the Niskanen Center’s climate policy director Joseph Majkut with his own response to Mildenberger and Stokes (M&S). Befitting the center’s standing as a politically grounded policy shop, The Immediate Case for a Carbon Price is savvy and compelling.

Whereas M&S largely dismiss carbon pricing as too chancy and slow to deliver large-scale low-carbon infrastructure, Majkut contends that pricing will bear fruit more quickly than regulations mandating and investment:

A carbon tax will start working almost immediately and be on solid legal ground, while complex regulations will take years for government agencies to craft and defend in court. If immediacy is necessary, then a carbon price is our best tool. (emphasis added)

Majkut also argues that the policies M&S tout, such as low-carbon procurement or production standards, targeted tax credits and expanded R&D, “will be more effective in a world where carbon pricing is a certainty.”

“Regulatory predictability and market certainty come from a carbon price,” he writes, “not from continually changing command-and-control measures.” With carbon pricing, he insists, “The private sector will be chasing opportunity instead of compliance.” 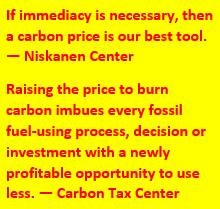 That last point resonates strongly with us. In an earlier (2012) point-counterpoint with Vox’s David Roberts (then at Grist), we wrote that “Standards and regulations tend to motivate threshold-meeting behavior but no more,” whereas the impacts of carbon pricing are unconstrained by this or that limit. In effect, raising the price to burn carbon imbues every fossil fuel-using process, decision or investment with a newly profitable opportunity to use less. Skeptics of the power of carbon pricing tend to overlook this dynamic, in keeping with their focus on Big Oil and their relative indifference to individuals’ role in fuel use and carbon burning.

Where CTC differs from Niskanen

It’s not surprising or even disconcerting that the center-right Niskanen Center would find fault with a center-left standards-investment-justice climate policy frame that disses carbon pricing. At CTC we’re still striving for a policy synthesis that combines S-I-J with carbon pricing, along the lines we sketched in our midsummer post, If the Democrats run the table in November. Unlike Mildenberger and Stokes and, evidently, Majkut and Niskanen, we don’t wish to choose between the two.

That said, Majkut’s post is a worthy and welcome counterweight to the naysaying about carbon taxing that has come to be de rigeur for the climate left. We invite everyone engaged in climate advocacy and interested in carbon pricing to give it a good read.