How Our 2019 Reading Led Us to Broaden CTC’s Mission

Among the gazillion articles, posts and books I read this year, three stand out.

Together, the three reads helped spark the Carbon Tax Center’s transformation from single-minded focus on carbon taxing and toward our new synthesis of taxing both carbon and inequality in support of a Green New Deal. As the year draws to a close, I want to share these pieces with CTC subscribers and visitors.

These shaped our thinking in 2019: Reporting on the ecological roots of the New Deal and the Gilets Jaunes protests, and a book on U.S. tax inequality.

Two of them, long-form journalism published in Harper’s magazine, plumbed the yellow vest protests in France and the ecological roots of Franklin Roosevelt’s New Deal. The third, a searing, book-length exposé of tax inequality in the United States, is already reverberating in the current presidential campaign.

1. A Play With No End: What the Gilets Jaunes Really Want, by Christopher Ketcham, Harper’s, August 2019

(Full disclosure: Christopher and I are longtime friends, close enough that I wrote a eulogy to his stepmother, who died last month, and for us to have had several long conversations about his Gilets Jaunes story as he was setting it to paper last spring.)

The Gilets Jaunes movement, named for the yellow vests that French motorists are required to keep on hand for emergencies, rocketed to public attention last December when their largely rural protests against fiscal austerity reached the capital.

Ketcham drew on his direct observations of three tumultuous yellow vest marches in Paris last winter, in which he talked with hundreds of protesters — working and unemployed people and pensioners whose lives have teetered as their communities have been hollowed out by deindustrialization and megastores. He discovered that the Gilets Jaunes weren’t, as the mainstream media insisted, protesting climate action; they were rising up against the yawning gap separating them from the super-rich, a gap widened by President Macron’s rescission of French wealth taxes just weeks before he pushed through a modest carbon levy that raised prices of gasoline and diesel fuel but left aviation fuel untouched. 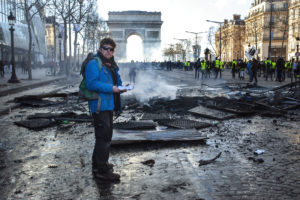 My conversations with Ketcham helped me appreciate the taint of unjustness that has come to surround stand-alone carbon taxing. That a carbon tax can, in theory, be made income-progressive — something this site has trumpeted for a decade — dissolves into irrelevance so long as the ultra-wealthy can consume fossil fuels with impunity while dominating discourse about our dependence on them.

One passage in particular in Ketcham’s article points to a possible escape from this dilemma — a passage I helped him craft on the roof of my apartment building in lower Manhattan, under the thwack-thwack of helicopters whisking the richest of the 1% to their weekend redoubts:

The war of the Gilets Jaunes against the rich, in the age of climate change, is one driven by an understanding unique to protest movements in France: that the privilege to lord and the privilege to pollute are one and the same.

2. Where Our New World Begins: Politics, Power and the Green New Deal, by Kevin Baker, Harper’s, May 2019

If Ketcham’s story put the lie to the media image of the yellow vests as know-nothing French trumpistas, Baker’s article resuscitated the Depression-era New Deal as an ecological project, not just an employment-creating and wealth-creating one. Indeed, in Baker’s telling, the New Deal’s three elements of jobs, production and care for the land were so intertwined as to have been one and the same.

In their desperation, the people of the Tennessee Valley had begun to cut or burn down more and more of the area’s once copious forests every year, seeking to clear more marginal land for farming, to sell the timber, or simply to heat their homes and cook their meals. Deforestation only further drained the soil, and what little land they had kept slipping away.

And this, about the high plains of eastern Montana, Wyoming and Colorado, across Nebraska, Kansas, Oklahoma and Arkansas:

The dust storms were not merely blown dirt, frightening as that might seem, but entire weird weather systems marching across the land. The static electricity they generated made fire dance along barbed wire and shorted car ignitions. It electrocuted farm animals and those few crops the blowing dirt had not already smothered — literally blackening vegetables in the patches where they lay. The people in the paths of these storms huddled in the darkness, unable to see their hands before their faces for hours, choking — sometimes choking to death — on the “dust pneumonia” that scarred their lungs as badly as if they had contracted tuberculosis.

Baker reminds us that the dust storms were human-made. Nineteenth-century warnings from the likes of John Wesley Powell — Colorado Plateau explorer and founder of the U.S. Geological Survey — that large-scale farming of the dry lands “beyond the hundredth meridian” was unsustainable, were plowed under by propaganda from mercenary railroads and their government enablers:

Much as the Trump Administration and corporate America react today to the idea of climate change or anything else they don’t want to hear by making stuff up, the government and the railroads … promoted quack theories to serve their purposes. No water? Don’t worry: there was always “dry farming,” “dust mulching,” and the imperishable notion that “rain follows the plow”— or civilization in general. 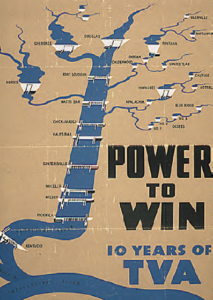 Linking Trump and today’s corporate America to their rapacious forebears is a constant refrain in Baker’s article. Another is pearl-clutching by mainstream gatekeepers such as The New York Times’ editorial board, both in 1933, opposing FDR’s fast-tracking of TVA authorization and funding (“enactment of any such bill at this time would mark the ‘low’ of Congressional folly”) and in 2019, decrying the sweeping ambition of the Green New Deal resolution from Rep. Alexandria Ocasio-Cortez and Sen. Ed Markey (“the resolution wants not only to achieve a carbon-neutral energy system but also to transform the economy itself”).

To be fair, that 2019 Times editorial, The Green New Deal Is Better Than Our Climate Nightmare, offered some positives about the resolution. Yet The Times’ tunnel vision is on full display in the passage excerpted by Baker:

Read literally, the resolution wants not only to achieve a carbon-neutral energy system but also to transform the economy itself. As Mr. Markey can tell you from past experience, the first goal is going to be hard enough. Tackling climate change in a big way is in itself likely to be transformative. We should get on with it.

What Markey and AOC grasp, and, The Times may come to understand, though perhaps too late, is that, in Baker’s words, “We must address climate change, and we must transform the way our political and economic systems work in this country — just as we did during the Great Depression. There is no way to do one vital thing without doing the other.” While TVA, the Soil Conservation Service and many other New Deal initiatives were imperfect, as Baker notes, they pulled the land, and the country, together.

3. The Triumph of Injustice: How the Rich Dodge Taxes and How to Make Them Pay, by Emmanuel Saez & Gabriel Zucman.

Saez and Zucman may not have intended it, but their new book — our third and final 2019 read — goes a long way to fulfilling Kevin Baker’s commandment to simultaneously address climate change and transform America’s political and economic systems.

That’s a high compliment for any book, and a particularly startling one for a book whose nominal subject is taxation. But reading “The Triumph of Injustice” is a revelatory experience, making clear just how much has been and is being stolen from working- and middle-class Americans to bloat the already criminally swollen coffers of the super-wealthy. 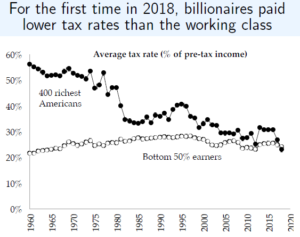 Graphic from “The Triumph of Injustice” by Emmanuel Saez and Gabriel Zucman.

These percentages are emblematic of American inequality. Plunging tax rates for those at the top of the income pyramid, engineered primarily through diminished taxation of capital (lower rates on capital gains and corporate income) have fueled what Saez and Zucman call “a snowball effect [whereby] wealth generates income, income that is easily saved at a high rate when capital taxes are low; this saving adds to the existing stock of wealth, which in turn generates more income, and so on.” The income pyramid grows ever steeper.

Snowballing is bidirectional. Burgeoning wealth at the top lets the super-rich buy heretofore unimagined political influence, not just through lobbying and campaign contributions but by creating and/or purchasing wealth-glorifying think tanks and media outlets. The result transcends ready-made votes in Congress and state legislatures to include an intellectual and cultural climate that valorizes the wealthy and stifles those who would counter the snowballing by taxing extreme wealth.

A signal achievement of “The Triumph of Injustice” is its painstaking construction of a century’s worth of tax incidence, not just at the federal level but state and municipal as well. The authors define eight or more tax categories — income, property, corporate, estate, wealth, payroll, consumption and health (the last encompasses payments for private and government health insurance) — and chart their “bite” for each income decile as well as for the top 1%, 0.1% and 0.01% and America’s 400 billionaires.

As if this tour de force weren’t enough, “The Triumph of Injustice” embeds its calculations and findings in a captivating narrative of American tax history from the colonial era through the Civil War, the Gilded Age, the New Deal, the postwar (and bipartisan) high marginal tax rate years, to Reagan’s tax renunciation (“Government is not the solution to our problem, government IS the problem”) and Trump’s tax “reform.” It’s illuminating and disturbing. 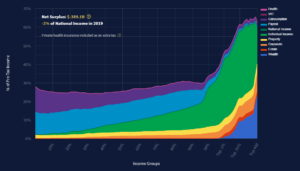 It wasn’t just tax erudition that vaulted Saez and Zucman to their status as architects of Sen. Elizabeth Warren’s and Sen. Bernie Sanders’ wealth tax plans. The likely clincher was their ability to calculate the revenue the Treasury stands to gain, year by year, through various permutations and combinations of raised taxes on capital (in the form of higher tax rate for capital gains, corporate income, and estates); and to explain how strong regulation backed by an aroused public could seal off the multiplicity of escape hatches from the higher taxes.

Somehow, “The Triumph of Injustice” delivers all this in just 200 pages. Even better, Saez and Zucman have posted their wealth and tax-incidence data on their website, taxjusticenow.org. The topper is their elegant, interactive page that lets you Make Your Own Tax Plan and see how the Warren and Sanders plans, or a plan of your own devise, can cut the holdings of the ultra-rich down to size and return American taxation to the relatively egalitarian shape it maintained from the New Deal through the Great Society.

At CTC, we are expanding our program around a new synthesis: a Green New Deal funded by taxes on extreme wealth — “taxing inequality,” you could say — and supported by a revenue-neutral carbon tax.

You can read more about this redirection here. We wish to emphasize that it is not an abandonment of carbon taxing. Far from it. Rather, we intend to situate carbon taxes in a broader framework that is suited to both the political dynamics and the climate emergency that will dominate the third decade of the 21st Century, and beyond.