(This post was researched and co-authored by CTC volunteer Diane Englander.)

A prominent Minnesota politician is hitching her candidacy for governor to a carbon dividend plan designed to reduce climate-damaging emissions and create jobs in clean energy.

State Auditor Rebecca Otto unveiled her Minnesota-Powered Clean Energy Plan on Sept. 20. The landing page of her gubernatorial campaign website depicts her on a rooftop driving home a solar inverter with a socket wrench. “Rebecca Otto walks the talk,” the page proclaims, urging voters to elect “a Governor who will actually do something about climate change.” 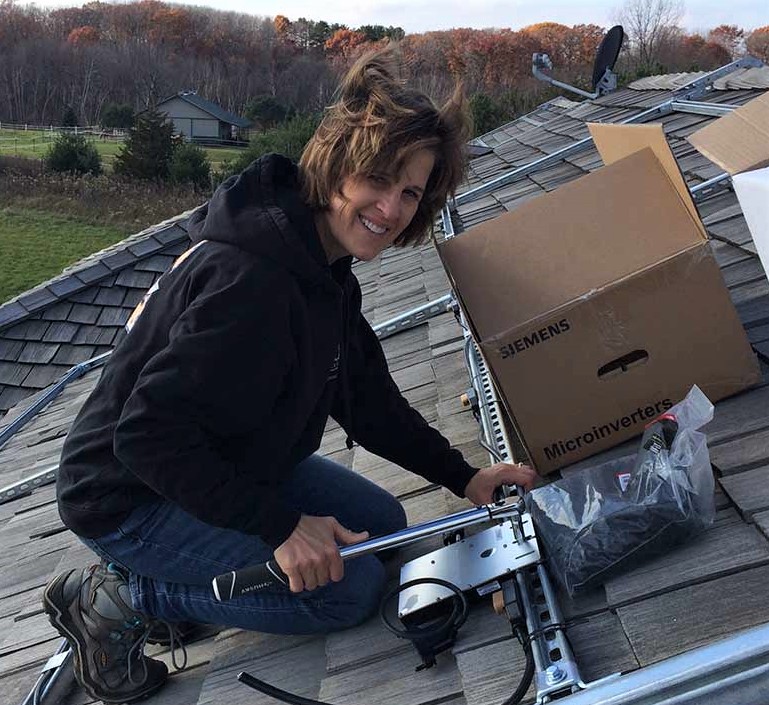 State auditor Otto hopes that, as governor, she can solarize Minnesota more than one roof at a time.

Otto’s plan is centered on a carbon charge that would begin at $40 per metric ton of CO2 and increase by 10% each year — a trajectory steep enough to cut carbon emissions by almost 30 percent (below 2005 levels) within a decade if applied nationally, according to CTC’s carbon tax model (Excel file), though not as much if applied only in a single state.

Three-fourths of the carbon revenues from Otto’s proposal would fund “Quarterly Clean Energy Cash Dividends” that Otto estimates will pay $600 a year to every Minnesota resident, with the dividend growing in tandem with the rising carbon price. The remaining 25% of the new revenue would fund “Clean Energy Refundable Tax Credits” for up to 30% of the cost of household energy-efficiency investments including electric cars, solar panels, triple-pane windows and insulation, and heat pumps.

The tax credits will “create tens of thousands of good-paying new private-sector jobs — often paying more than $80,000 per year — in every community across Minnesota,” Otto says, with “the work able to be financed with no money down” in many cases.

The 54-year-old Otto is one of six aspirants to the nomination of the state Democratic-Farmer-Labor Party, as the Minnesota Democratic Party organization has been known since the 1940s. Others include a U.S. Representative and the Mayor of St. Paul. Local newspapers suggest as many as a dozen Republicans may also contend to replace Gov. Mark Dayton, the two-term incumbent who is not seeking re-election. The race is viewed as “wide open” by Carleton College political scientist Steven Schier.

An Illinois native who now lives in the small town of Marine on St. Croix, northeast of the Twin Cities, Otto is serving her third consecutive four-term as state auditor. In 2006 she handily defeated the incumbent Republican, then won by a squeaker in 2010, becoming the only Democrat ever re-elected to the office. In her 2014 re-election she won by her widest margin to date, outpacing Gov. Dayton by six percentage points.

Otto’s plan is a variant of the fee and dividend approach espoused by the non-partisan Citizens’ Climate Lobby and, more recently, the Republican-leaning Climate Leadership Council. It charges fossil fuel providers a fee pegged to their fuels’ carbon content and returns revenues to households as equal “dividends.” Her 25% allocation to clean energy tax credits can be seen as a pragmatic concession to business and job concerns that invariably arise in state-level carbon-pricing campaigning.

Otto is arguably the highest-profile U.S. political candidate to attach a campaign to an explicit and transparent price on carbon. She says that her 11 years as state auditor have taught her that Minnesotans want economic opportunity along with solutions to pressing problems such as climate change. She also views her program as a counterweight to “fossil fuel interests [that] spend billions to control our democracy and sow doubt and confusion [to] protect their profits at the expense of Americans.”

Minnesota has a history of seeking to address climate change. In the 1990s, state activists including the St. Paul-based Institute for Local Self-Reliance mounted a campaign for a billion-dollar state “tax shift” to reduce income and property taxes by taxing energy and fuels. While their proposal didn’t make it into law, it laid the groundwork for later carbon tax efforts. Since 1993 the Minnesota legislature has required the state Public Utilities Commission to incorporate air pollution costs into decision-making on power plants. In July the PUC ordered this “shadow price” raised to a range of $9.05 to $43.06 per short ton of CO2 by 2020. (Utility Dive gives details and explains the wide range.)

Otto’s plan would go much further, of course, embedding actual carbon costs in fuel and electricity prices and perhaps igniting a spark among the other 49 states. In an article this week for Scientific American, States Can Lead the Way on Climate Change, Otto wrote that “If other state leaders adopt similar proposals, the 2018 midterm elections could become a watershed moment when America seizes on a new state-level approach to tackling climate change and finally begins to steer the Titanic away from the iceberg.”

At a minimum, Otto’s campaign ensures that not just climate change but the idea of actually charging for carbon emissions will be front and center in next year’s Minnesota gubernatorial race. If she wins, however, her proposal still faces two potential hurdles: the state legislature and the Minnesota state constitution, whose Article 14, Section 10 could be interpreted as requiring that “excise taxes” on gasoline be paid into the state’s highway distribution fund (see discussion in CTC’s report, Opportunities for Carbon Taxing at the State Level, pp 91-92). However, if the carbon price is construed otherwise, e.g., as a fee, Otto’s proposal could be in the clear.