We join New Jerseyans in marching for climate

What to do on April 29: march with hundreds of thousands in DC, or speak at the Bergen & Beyond Climate Rally, a “satellite” people’s march in New Jersey? The NJ rally was reachable by bike, so the decision was easy. I pedaled away from my house in lower Manhattan at 8 a.m, met my friend Josef at the foot of the George Washington Bridge bike path at 9, and we arrived at the Bergen County Courthouse in Hackensack before the 10 a.m. start. The ride was hilly and heavily trafficked, but nothing we weren’t used to. The rally was terrific, with 300 of us, fine music, energetic speeches and no shortage of great signs. Here are some, along with my remarks. Big thanks to rally organizer Janet Glass and photographer Jessie Glass. — C.K. 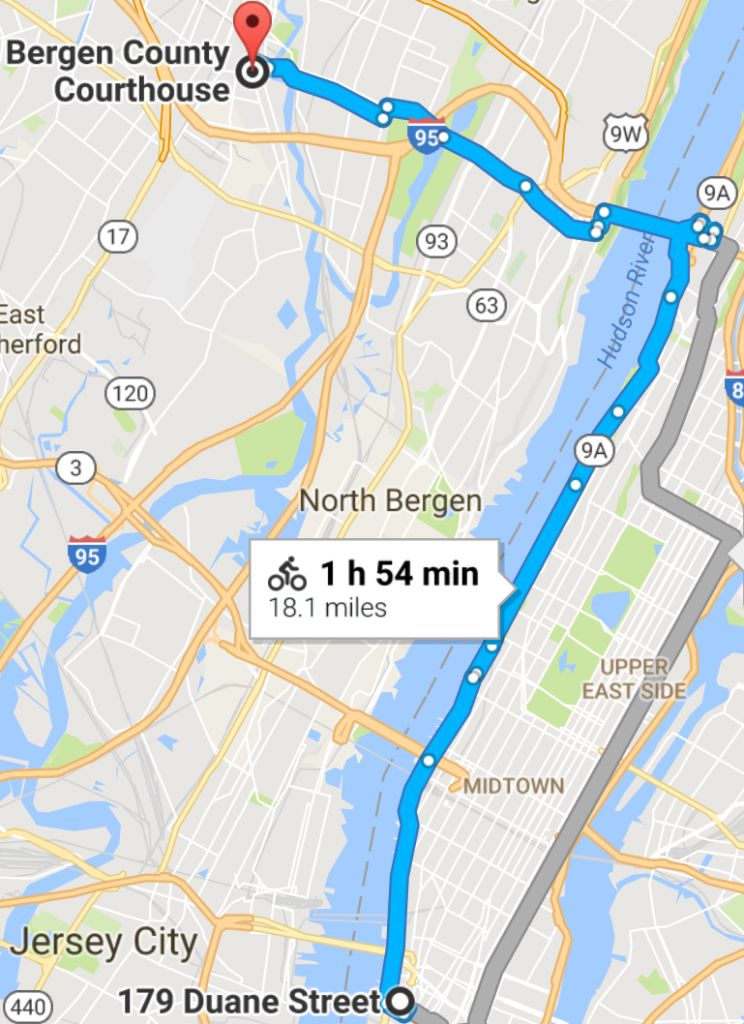 Google Maps nailed it: a bit under two hours to cycle from lower Manhattan to Hackensack.

Let’s begin with good news: decarbonization of the world’s energy is under way.

In Great Britain, birthplace of the Industrial Revolution, CO2 emissions have fallen to levels not seen since the late 19th Century.

The solar and wind revolution is accelerating.

Energy efficiency is now a profit center for business and industry.

This ought to be heartening. But at best it is a bare minimum.

And even this progress is under assault.

You and I know that. Which is why we’re here today.

More good news: hundreds of thousands of us are assembled today in Washington and cities and towns like this one across the country.

We’re standing and marching for climate and for each other.

We’re standing to turn American politics upside-down … or, I should say, rightside-up.

Like millions of Americans, we see what the GOP has become: a racket to restore patriarchy, extractionism and white supremacy. 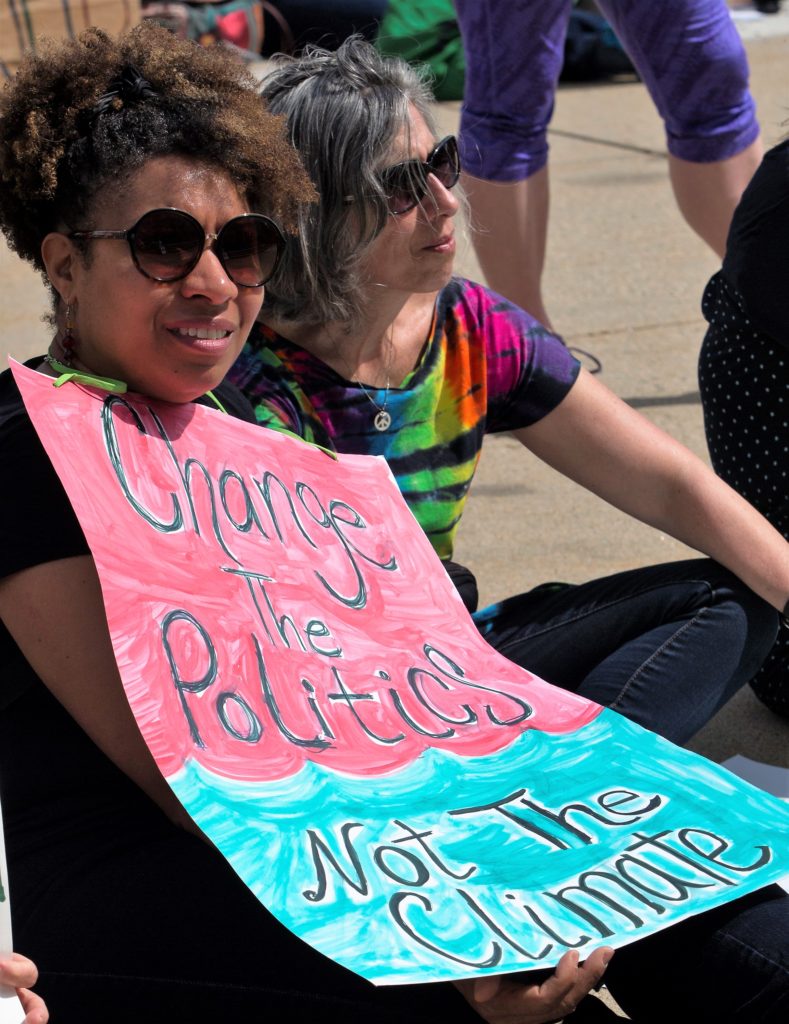 And we see the Democratic Party for what it is: a well-meaning but too often frightened, ineffectual band of centrists who shy from the radical action we need.

At the March for Science last week, a sign said: Trust Scientific Facts, Not Alternative Facts, and we all agree.

To stop climate ruin, we need economic facts, and fast. We need prices of fossil fuels that tell us the truth about climate damage caused by fossil fuels.

Like it or not, the prices of fuels and energy are a dominant factor in how we choose and use them — and, thus, in how much carbon pollution we generate.

The artificial marketplace advantage of unpriced carbon pollution has helped coal, oil and gas gain a stranglehold over our economic system and social structures.

We can break that stranglehold by charging fossil fuels for their climate damage. That’s the fast path we need to the clean energy future that will protect our cities, coasts and civilization, our farms and forests and all living beings, from climate devastation.

We can do this. We can build a grassroots tide so powerful that centrist Democrats who have shied from carbon taxes, and Republicans who belittle climate concerns altogether, will either come around or be booted from office. 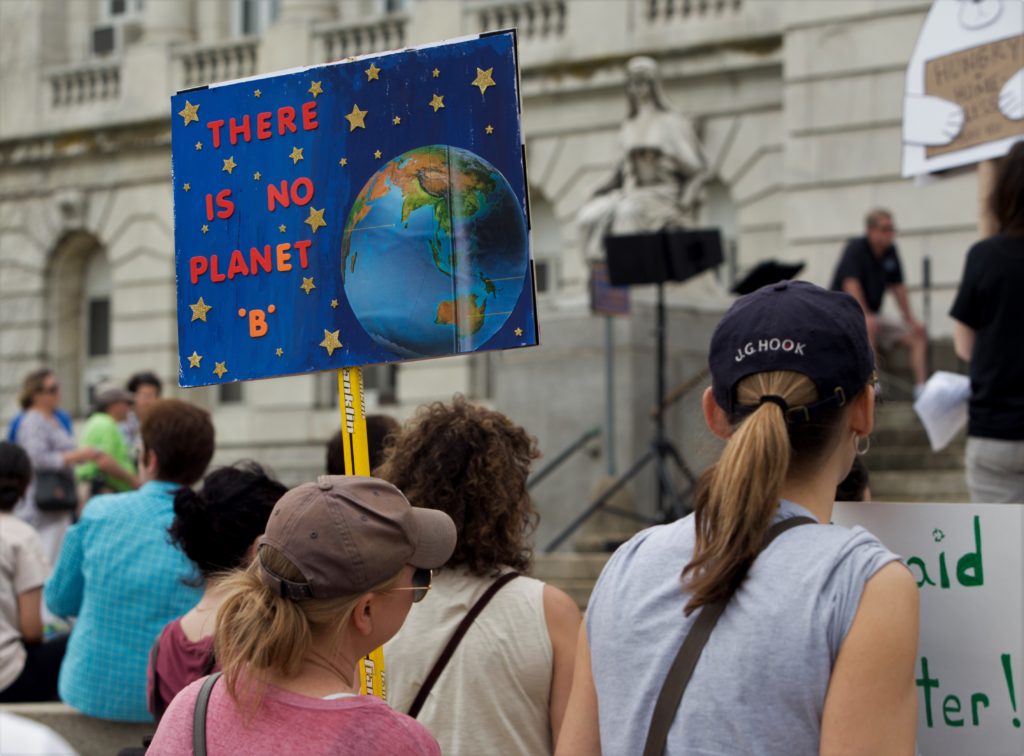 Join Citizens Climate Lobby. Demand that your elected rep’s, and the people vying to replace them, endorse carbon taxes at the state and national level. And demand that 350.org, Sierra Club and other climate advocates do the same.

We can do this, we can tax carbon, while protecting the poor and the disenfranchised.

I want to end with a line from that soulful Isley Brothers song, Harvest for the World:

Gather everyone, gather all together. Overlooking none, making life get better for the world.

That’s what our climate movement is about.

That’s what the Resistance to Trump is about.

Thank you for being here. Gather everyone, gather all together. Overlooking none, we’ll make life get better for the world.