The Good News: A clean electricity boom is why the Clean Power Plan is way ahead of schedule

We’ve just updated this post, replacing estimated 2016 electricity data with actual. The pdf in the link in the first paragraph has been updated as well. — C.K., March 22, 2017

Today we released a new CTC paper (pdf) reporting and explaining what we call the good news of the U.S. electric power sector’s rapid decarbonization over the past decade.

The paper quantifies the power sector’s sizeable reductions in carbon emissions since 2005 and clarifies what accounts for it. We show that while substitution of fracked gas for dirtier coal contributed significantly to reducing emissions, a greater role was played by clean electricity: an up­surge in electricity production from renewables (wind turbines and solar photovoltaic cells), and electric­ity savings that caused electricity usage to flatten even as economic output increased. 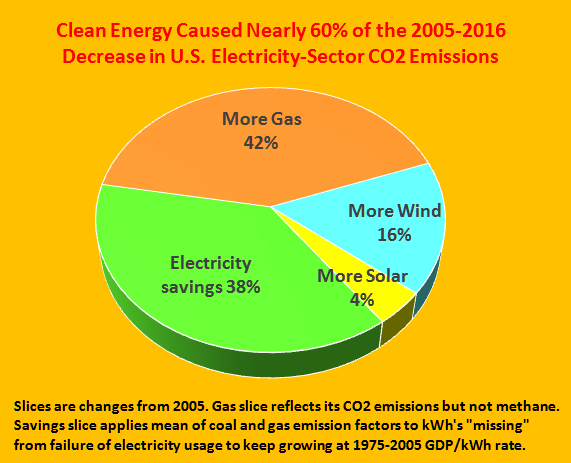 By the end of 2016, the U.S. power sector had reduced its emissions of carbon diox­ide by 25 percent since 2005, thus achieving nearly four-fifths of the 2030 carbon-re­duction goal set by the Obama Clean Power Plan. While this suggests the CPP goals were too modest, this is genuine progress, even if confined to electricity (omitting vehicles, refineries, industrial processing, etc.).

The good news gets even better: we estimate that 58 percent of the electricity sector’s CO2 reduction in 2016 vis-a-vis 2005 was due to clean electricity, and just 42 percent due to replacing coal with natural gas. This finding belies the prevailing narrative crediting fracked gas for reducing coal burning and lowering carbon emissions.

The electricity sector’s reduction in carbon emissions is good news not only because of its magnitude but because it effectively “banks” emission reductions against a slowing of progress looming under the Trump administration. The leading role played by clean electricity is good news because it comes without the climate-damaging methane emissions associated with natural gas extraction and transpor­tation, and because it signifies the emergence of a new energy economy built on inherently clean energy production and usage tech­nologies that can scale rapidly, economically and gracefully.

While this trend is heartening, far more is needed for the United States to meet its economy-wide car­bon-reduction pledge under the Paris climate agreement, especially in light of the rise in emissions in the transportation sector spurred by cheap petroleum fuels, which we’ve been reporting for two years. That surge underscores the need for robust carbon taxes to stimulate big emission reductions.

Of course, the post-2005 period includes the Great Recession, whose epicenter was 2009 and from which the re­covery has been sluggish. It’s tempting to attribute the post-2005 flattening of U.S. electricity use to anemic economic growth. But that would be not only simplistic but mistaken. GDP grew by 17 percent during 2005-2016. As we show in the report, if the 1975-2005 relationship between growth in GDP and growth in electricity generation had continued after 2005, then electric output in 2016 would have exceeded 2005 output by 13 percent, rather than the mere 1 percent increase for 2016 over 2005.

What we’ve done in The Good News is quantify that difference, in both saved electricity and avoided carbon emissions. In terms of climate impact, the electricity savings in 2016 was roughly as consequential as the vaunted pushing out of coal-fired electricity by natural gas. Indeed, if not for the savings, much of the boom in fracked gas would have been in addition to continued coal consumption.

Our “Good News” report is data-intensive.

Important note for table: Sector-wide CO2 reduction in last cell (609 million metric tons) is smaller than sum of CO2 reductions credited to gas (371 million) and clean electricity (521 million) because latter figure credits efficiency for averting CO2 increases that would have resulted if electricity use had grown parallel with economic activity.

Why has electricity usage become decoupled from overall economic activity? Many factors have been involved, and they tend to be both overlapping and hard to quantify. They include a shift by young adults to urban living and delayed family formation; new energy-reducing technologies that are being adopted by a widening base of engaged customers (who in turn feed demand for these devices and systems); ratepayer-funded energy-efficiency programs along with governmental codes and standards for buildings, appliances and other end-use equipment, all increasingly backed by a support struc­ture of software, best practices, and monitoring and evaluation; structural changes in the economy including the shift from energy-intensive heavy manufacturing to service industries; emer­gence of a robust business sector that finds, finances and delivers money-saving efficiency improvements in commercial buildings and multifamily housing; and widening penetration of digital technologies in everything from energy management to product design, most notably in LED’s but also in thermostats and appliances. (See the report for fuller discussion.) 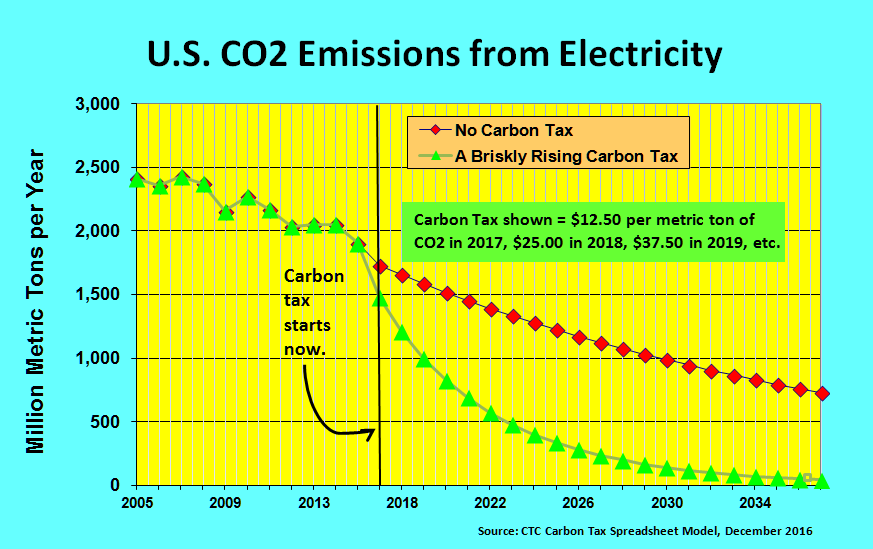 The progress to date in reducing electricity-sector emissions has been accomplished without a price on carbon pollution. Notwithstanding the election result, a carbon tax remains the most powerful policy tool for rapidly driving down emissions in the power sector and, especially, the rest of the economy. The chart at left illustrates just how fast a robust and briskly rising carbon tax could drive down electricity-sector emissions. Such a tax would accelerate the ongoing decarbonization of electricity supply by increasing the returns from substituting zero-carbon electricity sources for fossil fuel generation. The tax would further reduce emissions by dampening electricity usage through the charge it adds to electric rates; however, that effect would be relatively modest and transitory since the carbon content of each kWh would shrink over time, diminishing and ultimately zeroing out the tax base.

We’ve estimated that the carbon tax levels mandated under the McDermott bill would have reduced economy-wide CO2 emissions from fossil fuel combustion — not just from electricity but from motor vehicles, air travel, industry, etc. — by one-third within a decade. While the political hurdles are higher under a Trump administration, the need for a robust carbon tax remains at least as strong as ever.

Addendum, Jan. 11, 2017: Today, the Sallan Foundation published another take by us on this topic, Almost Unnoticed, Flat Electricity Demand Is Crushing U.S. Carbon Emissions. It has two new graphs and a bit more detail than this post outlining how and why U.S. electricity use has flatlined since 2005.