This post was researched and written by CTC intern Michael Kendall. More recent info, including 2016 carbon emissions data, are in the U.K. section of our Where Carbon Is Taxed page.

The United Kingdom, the birthplace of the Industrial Revolution and a kingdom built on coal, has cut emissions of carbon dioxide to levels not seen since the late 19th Century, according to a report from the UK consultancy, Carbon Brief.

As Carbon Brief noted, total UK emissions hadn’t been that low since 1894, save for 1921 and 1926, when miner strikes paralyzed the coal industry. 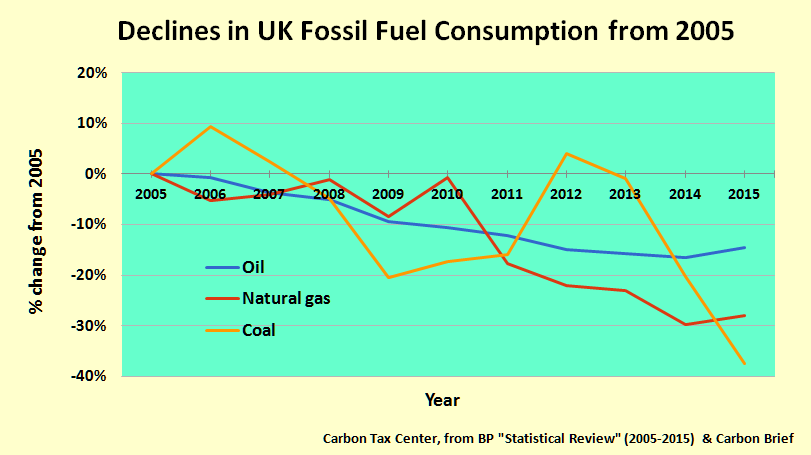 No more carrying coals to Newcastle, as the historic but filthy fuel disappears from the UK.

Coal burning is disappearing from the former perennial bastion of coal, while use of oil and gas is down considerably from 2005, despite upticks since 2014 for both fuels. At the same time renewables are thriving, with a Carbon Brief analysis showing that wind generated more electricity throughout the UK than coal in 2016.

These reductions stem from a coordinated effort to cut emissions, reliant upon setting a national price on carbon in 2013. “Perhaps the most consequential factor,” says Carbon Brief editor Simon Evans, “is the UK’s top-up carbon tax, which doubled in 2015 to £18 per tonne of CO2.” (Brits sometimes refer to their carbon tax as a “top up” tax since it was intended to top up the carbon price determined via the auctioning of emission permits under the EU’s Emissions Trading Scheme.)

The UK carbon tax equated to $24-$25 per short ton in 2016, at last year’s average 1.5-to-1 sterling to dollar exchange rate (the exchange rate is a good deal lower at this writing in 2017, however), and converting metric to short tons. A carbon tax targets coal above all, on account of coal’s higher carbon content per Btu compared to oil or gas, which enhances the profitability and deployment of zero-carbon substitutes for coal-fired electricity, such as wind. And in fact Evans has charted the month-by-month collapse in coal use. 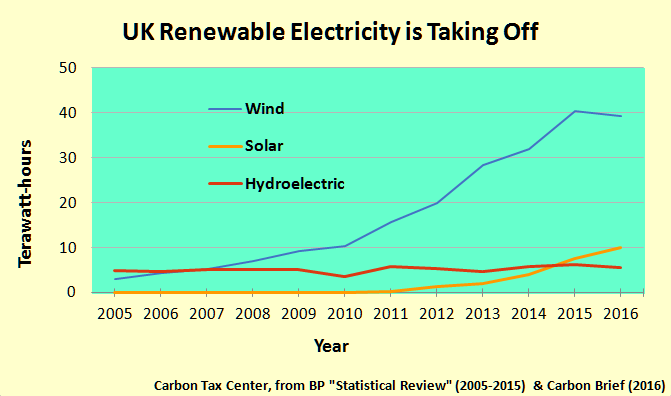 Last week Drax, an energy generation company specializing in biomass, presented commissioned research taking carbon pricing a step further. The researchers modeled the likely impact on use of coal and natural gas and CO2 emissions from alternatively removing or doubling the UK carbon tax. Their models show that without the carbon tax, coal generation would have doubled and emissions would have risen 21 percent, significantly undercutting past emission gains; whereas doubling the tax would have cut coal generation by an extra 47 percent and shaved another 10 percent off overall CO2 emissions.

Continuing the good news: belying the standard notion that pricing carbon emissions must increase household energy bills, UK households paid less in energy bills (gas plus electricity) in 2016 than they did in 2008. We’ll look to Simon Evans for a summary:

Since 2008, household consumption of gas is down by 23% and electricity by 17%, cutting the average bill by £290 and more than offsetting the increase in policy costs over the same period… These energy savings are largely the result of energy efficiency policies and regulations, from UK rules mandating more efficient condensing boilers to EU product policy on more efficient fridges and ovens.

In short, while the price per kWh of electricity has risen for UK households, improvements in efficiency have cut household usage even more, enabling total household costs to fall. This stands as a model instance of regulation working in tandem with carbon pricing, as more-efficient appliances became more available due to regulation and more attractive due to the higher unit cost of electricity. 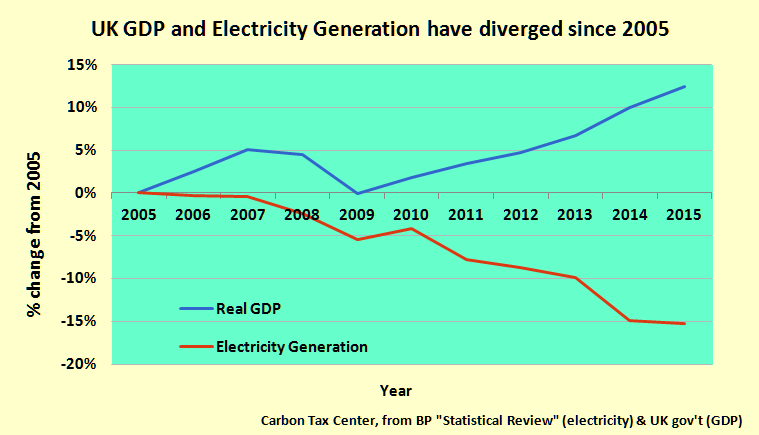 An unprecedented 15 percent drop since 2005 in electricity generation has helped drive down emissions as the UK economy has grown.

A further dividend of electricity savings, of course, is that the nationwide increase in electricity from wind turbines and gas-fired generation has been at the expense of coal rather than in addition to it — mirroring the U.S. experience since 2005 that we distilled and quantified in our December report, The Good News.

Where does the carbon tax stand now, with last year’s Brexit vote set to remove the UK from the European Union? The government’s March 2011 Budget set a 2020 target of a £30 per tonne tax on CO2, but in 2014 that figure was reduced to £18 via a price cap until 2020. In 2016 this cap was extended to 2021 “to limit the competitive disadvantage faced by business and reduce energy bills for consumers.” (See “The Carbon Price Floor” House of Commons briefing paper, p.3.)

Last week’s Spring Budget 2017 is vague about the future of the carbon price floor, stating that the “government remains committed to carbon pricing” but reserving details until the Autumn Budget 2017. The most promising statement in the budget is this, at page 34: “Starting in 2021-22, the government will target a total carbon price.” It suggests that the UK intends to continue to price carbon despite the country’s imminent exit from the EU. Carbon Brief provides a fuller analysis of the Budget’s potential impact on climate policy.