“Keep It In The Ground” Needs a Carbon Tax

Last night I spoke at a forum on carbon taxes organized by NYC350. The venue was the Ethical Culture Society building on Manhattan’s Upper West Side. Coming of age politically in the early sixties in a New York suburb, I was greatly influenced by the humanist perspective I heard in weekly radio broadcasts by the society’s leader, Algernon D. Black.

I shared the podium with two prominent climate advocates – renowned climate scientist James Hansen and Cecil Corbin-Mark of WE ACT for Environmental Justice. Here are my remarks.

I want to thank 350NYC and the NYC Grassroots Alliance for convening us and inviting me. Because my time is limited – as it should be, to allow for discussion – let me dive right in.

Since not all of you know me, I brought a display of books I wrote or helped write, along with my contact information.

The Price of Power (1972) was an exposé – the first – of rampant pollution from U.S. fossil-fuel generating stations. Power Plant Cost Escalation (1981) quantified the skyrocketing costs to build nuclear power plants. Then I turned to what we now call livable-streets activism. With books, organizing and direct action and, yes, arrests.

This work had great impact. Less successful, I admit, has been my campaigning over the past decade for congestion pricing to rationalize and improve transportation in New York City, and for carbon taxes nationwide to slash climate-destroying emissions.

Thumbnails of my work for clean energy and livable streets.

I have something heretical to say about the Standing Rock occupation: For all its rightness in asserting the sovereignty of Native Americans and protecting native people’s water, for all its courage in standing up to militarized assault, for all its importance in building the climate movement, and for all its audacity in winning the first big direct-action victory of the Trump Era, yesterday’s stirring triumph by the Standing Rock resistance will do nothing to slow carbon emissions — by itself.

Oil that doesn’t flow to refineries through the Dakota Access Pipeline will instead come from somewhere else – Kuwait or Texas or a hundred other places – to be burned in cars, trucks and planes, as The Onion reminded us last month.

“The Onion” got it right.

The last part of that Q&A tells us what we need: demand destruction. Massive demand destruction. And key to demand destruction is carbon taxing. Not a token tax, like Exxon or an occasional Republican supports, or says they do; but a robust, briskly rising carbon tax that, over time, will transform the entire economic and social structure that locks people and communities into fossil fuels. A tax that rewards any and every behavior and investment that uses less coal, oil or gas, not more.

A carbon tax of that magnitude will generate enormous revenue – an issue I’ll come back to. But first I want to explain why demand destruction on the scale we need won’t come from other policies and campaigns unless they’re backed by a robust carbon tax. 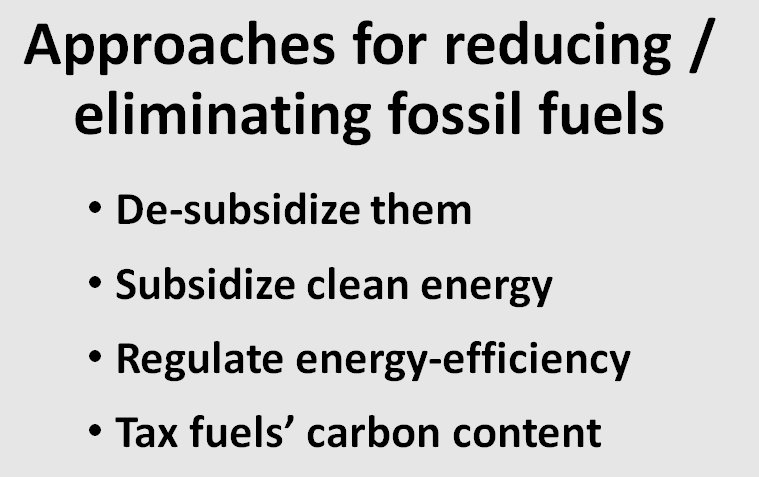 Clean-Energy Subsidies? They’ve done wonders for renewables. But as wind and solar grow – and they’re on track this year to provide nearly 7 percent of U.S. electricity – subsidizing them is going to get unaffordable. And 7 percent of electricity is only a few percent of energy. Renewables have a long way to go. (More here.)

Efficiency Standards? These are also doing wonders, forcing design changes in appliances, vehicles and buildings that “market forces” alone would not have brought. But these savings too aren’t enough. Standards are reactive, they’re slow and shot through with loopholes. Standards are also piecemeal and scattershot, forever trying to catch up with evolving technology. (More here.)

Most important, standards alone can’t motivate the changes in behavioral patterns that maximize energy savings. Consider mileage (CAFÉ) standards. Yes, they’re valuable, but at best they affect only half of the gasoline-usage equation. 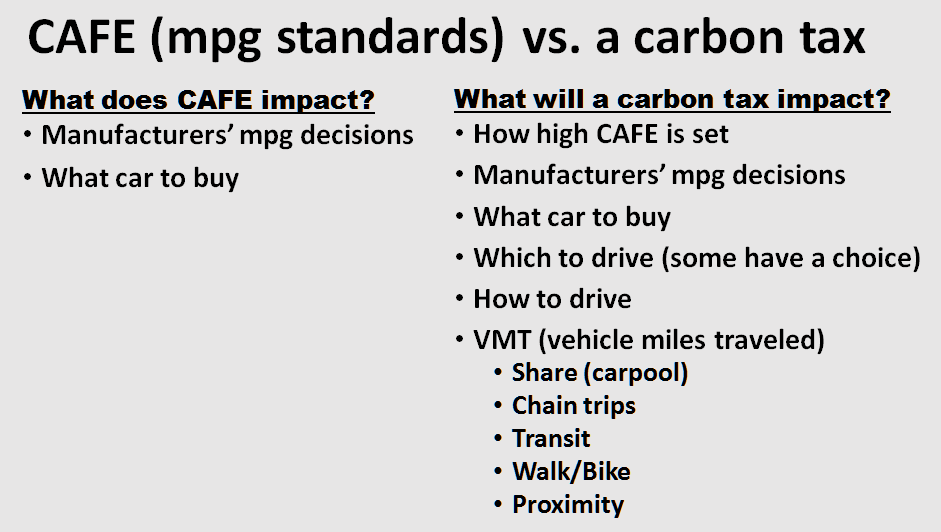 Mileage standards get at just half of gasoline demand.

We’re not going to get deep cuts with half-measures. A carbon tax – a robust one – is no half-measure. It’s the one policy that can elicit the billions of carbon-reducing decisions and behaviors that a swift full-scale transition to clean energy requires.

On an individual level, a carbon tax will motivate switches from disposable plastic bottles to refillable ones. Carbon taxes will motivate businesses to produce goods domestically, retaining and growing jobs, as shipping prices rise. Now multiply those examples across the board. Everything will “pencil out” more toward low-carbon and zero-carbon sustainability.

Those changes will add up. The higher the tax, the bigger and faster the reductions. (More here.) 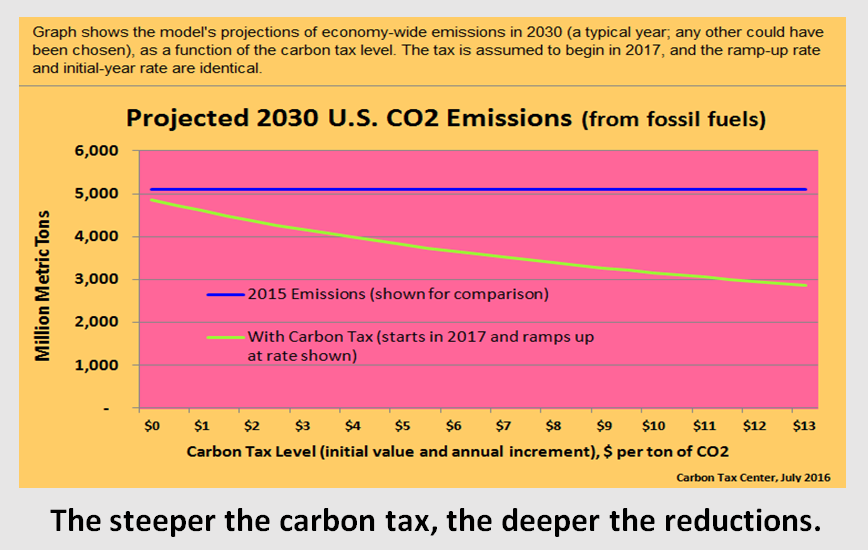 Not your usual carbon-tax graph. Tax rises each year by amount in x-axis.

This enormous tantalizing potential is what the Carbon Tax Center fights for. It’s also why the fracturing of the climate movement that contributed to the defeat of the carbon tax referendum last month in Washington State is so distressing.

Because my time is limited, I’ll make just a few points about that campaign.

First, the “sales-tax swap” in the Washington carbon tax – lowering the state sales tax to cushion the bite from the carbon tax – was the only available ironclad way to protect low and moderate-income families from the higher-priced energy. Castigating it as a right-wing “tax cut” was misleading and wrong.

Second, the tax proponents kept the price relatively low – $25/ton though rising over time – because any one state is limited in how it can go. The point of the measure was not to make Washington state carbon-free but to break the national logjam and start a stampede leading to a U.S. carbon tax. And the experience of British Columbia shows that even a modest carbon tax has a noticeable impact. 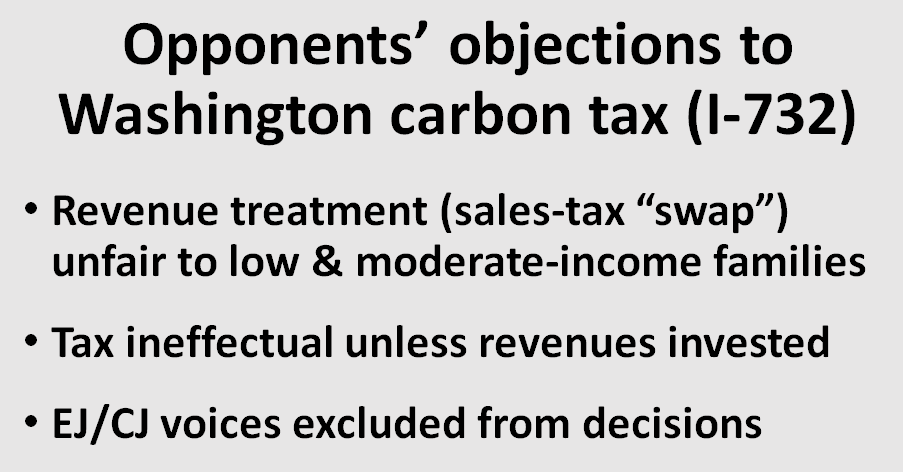 Third, the “Left Greens” who opposed the Washington initiative because it didn’t invest the revenues in communities never came up with an actual plan to do so. The opponents were also unpersuaded that a carbon tax would cut emissions across-the-board, including in frontline communities. To me, it’s axiomatic that it will.

We have to do better next time. The Keep It In The Ground movement needs to embrace carbon taxes. Not as a “good idea” but as a central demand. And, while we can and should debate details of carbon tax design, including revenue treatment, we need to get behind any and every carbon tax that keeps low and moderate-income families whole.

There aren’t many “next times” left. We need to bring our movements together. 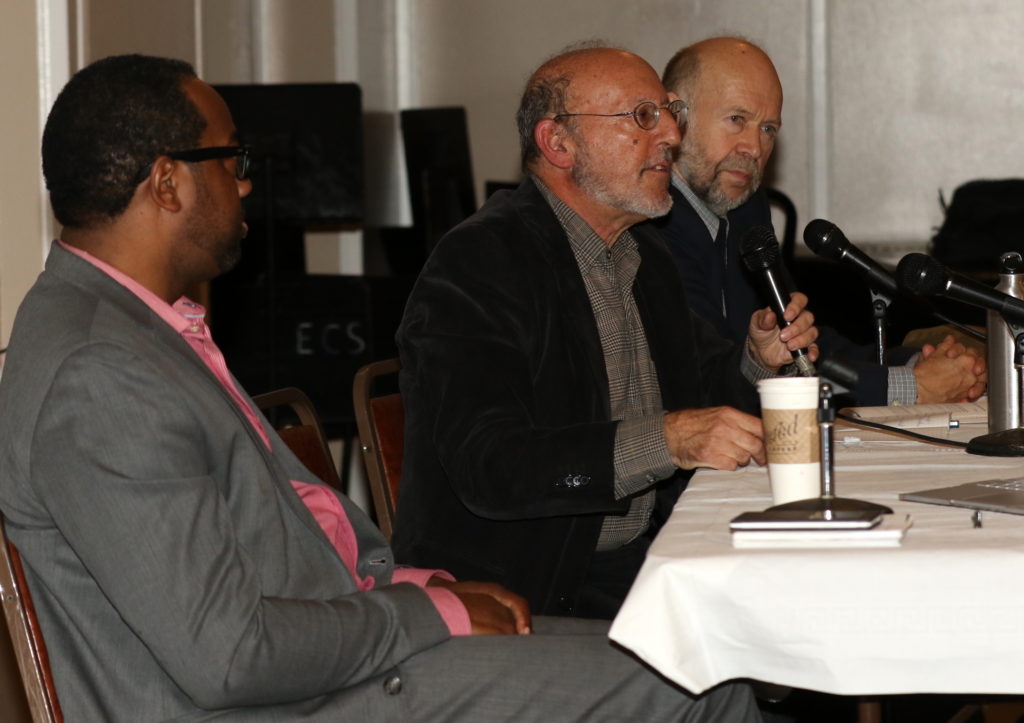