A new report by Harvard economist Joe Aldy is getting some play in climate policy circles. Long-Term Carbon Policy: The Great Swap argues that the incoming administration might support a national carbon tax if it were made part of a deal to lower tax rates and jettison carbon regulations.

To say we’re skeptical is putting it mildly. Why would a President Trump and an emboldened and still-Republican Congress take on a carbon tax to get stuff (gutted CO2 regs, lower taxes) they can almost certainly win straight up? But rather than point yet again to Republican denialism, we’re inviting you — fellow carbon tax proponents — to address Aldy’s carbon tax rate. 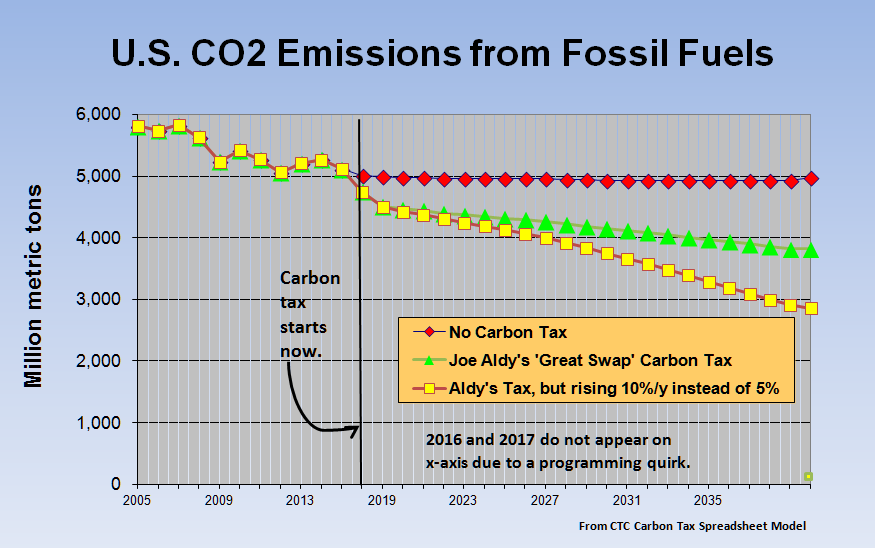 Is that a lot or a little? A 26 percent reduction would be a lot if it were relative to 2016 emissions, or to 2025 emissions without a carbon tax. Unfortunately, the projected reduction is vis-a-vis levels in 2005 (the year used as a baseline in many climate-policy discussions).

Aldy isn’t perfectly clear on that point. He states in his report:

This carbon tax would lower U.S. carbon dioxide emissions 26 percent by 2025 — consistent with our nation’s pledge at the Paris climate summit last year –and more than 30 percent by 2030.

No 2005 baseline there, though we’re sure Aldy intended it. Clarity is critical because carbon emissions have already fallen a great deal. Compared to 2005, U.S. emissions last year were already 12 percent less, which is nearly half the distance to 26 percent. And emissions are set to fall further this year, as reductions from coal’s continued plunge in the electricity sector outweigh the increase in gas-guzzling caused by cheap gasoline.

Moreover, according to CTC’s carbon-tax model, which perfectly matches Aldy’s estimate of the impact of his carbon tax (our model says the reduction from 2005 would be 25.7 percent), U.S. emissions in 2025 without a carbon tax will be nearly 15 percent below the 2005 baseline. The Aldy carbon tax would cut emissions by only another 13 percent.

Is that a lot or a little? I guess it depends. It’s precious little in an Obama or Clinton world, not to mention a Sanders world. It’s not so small, perhaps, in a Trump world. Still, maybe Aldy — or another expert or advocate — could get more aggressive with the tax rate? The same tax increasing at 10% a year (above inflation) rather than 5% would reduce 2025 emissions by 29% (relative to 2005), with reductions accelerating and reaching 40% by 2033. Why not start the conversation there?

We invite readers to download CTC’s carbon tax model to see for themselves how fast Joe Aldy’s tax, or different ones, would drive down U.S. carbon emissions. Dust off your copy of Excel and click here. Our Web page Carbon Tax Effectiveness goes behind the model curtain to reveal what / why / how.