Washington State’s I-732: A Climate Measure for the Society We Have

Paul Goodman, a mid-century American apostle of transformational change, entitled a collection of his letters, “The society I live in is mine.” With apologies to Paul, whose unsparing but inspiring critiques of U.S. corporate government helped shape my generation of radical activists, I’m here to say that the Washington state carbon tax initiative, I-732, is the perfect climate measure for the society we have. 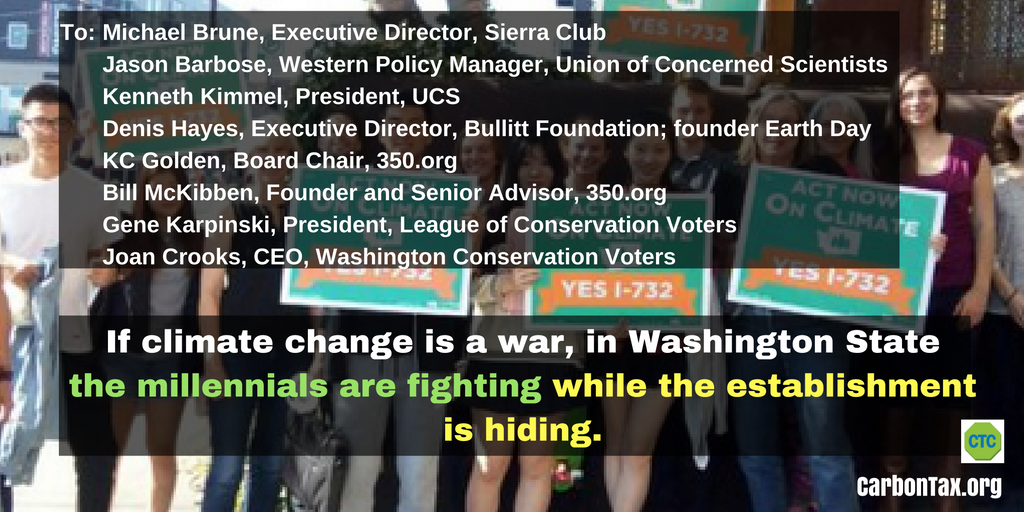 Calling out the old guard’s “deafening silence” (or worse) on the Washington state carbon tax.

I thought of Goodman today as I read the remarkable “Open Letter from the Millennial Leaders of Carbon Washington and the Yes-on-732 Campaign” to the green establishment leaders who are silent or oppositional on the initiative. Paul was an unabashed champion of youth and an instinctive foe of the old guard, most notably in his best-known book, Growing Up Absurd.

I believe Goodman, renowned for speaking directly, would have relished the millennials’ plain-spoken courage in calling out their heroes’ “deafening silence” on I-732. Devoted to participatory democracy, he would have applauded the millennials’ insistence that the climate crisis “belongs to more than just a handful of non-profit gatekeepers to decide what should be politically realistic and what isn’t.”

I also think that Goodman, a champion of rigor, would have pounced on the insubstantial arguments made by I-732’s “green” opponents, corrected their errors, and alerted them to the absurdity of climate advocates opposing a carbon tax that has advanced to an actual ballot proposition.

Here’s one of those arguments. It’s the first of three bullet points in the message by Washington Conservation Voters telling their members and supporters to vote No:

[I-732] relies solely on economic signals to drive down emissions, which allows all polluters to pay to continue to pollute instead of reducing emissions. Without a carbon cap, we can’t ensure that we will achieve the pollution reductions that are required in state law, but are currently unenforced.

Everything in that paragraph is correct. And all of it is utterly beside the point.

Yes, Initiative 732 relies solely on economic signals to drive down emissions of carbon dioxide. That’s by design. Those signals — higher market prices of fossil fuels — are essential to solve or at least massively shrink the climate crisis. Without them, any climate policy, including the “investment” approach favored by WCV and other green groups opposing or abstaining on I-732, will fall woefully short.

Make no mistake, Carbon Washington, the upstart group that drafted Initiative 732 last year and obtained hundreds of thousands of qualifying signatures to put it on the Nov. 8 ballot, dearly wants society to invest in massive weatherization and solarization of buildings, remediation of polluted communities, better urban and suburban transit, and the like.

So do I. In fact, my other “day job,” aside from running the Carbon Tax Center, is mostly fighting for those very investments and policies in New York City, where I live and work.

Either Carbon Washington or I could have written the first part of WCV’s second bullet:

Well, that transition is precisely what carbon taxes can spark. Raising the prices that businesses and households alike face for coal, oil and gas and for the goods and services manufactured from them will accelerate the society-wide switch to clean energy. Conversely, without those higher fossil fuel prices, solar and wind and electric vehicles and transit will forever be competing with one hand tied behind their backs. Sure, they’ll advance, but not nearly fast and widely enough to push out fossil fuels on the scale our climate requires.

I readily admit — and I’ll wager that Carbon WA will admit as well — that by itself the I-732 carbon tax won’t effectuate that transition either. The tax level specified in the initiative, essentially $25/ton of CO2 after two years, then rising 3.5% a year above general inflation, is too low for that. But that too is by design: the USA’s first statewide carbon tax can’t be super-steep, else industry and agriculture could be hampered vis-à-vis neighboring states, a prospect that would forestall approval by either voters or the legislature.

Rather, the Washington carbon tax is intended as proof of concept. Once a carbon tax has been established in one state, it can be adopted by others, creating a critical mass of political acceptance, demonstrating success in driving down emissions, and disarming the negative arguments on effectiveness, equity and overall feasibility that have stood in the way of a national tax on carbon emissions.

Moreover, as I argued recently, the emerging possibility of a “wave” election transforming the power dynamics in Congress creates a surprise bonus opportunity, in which winning a carbon tax next month in just one state could give tremendous momentum to carbon tax proposals at the federal level.

Even without a Democratic takeover of one or both houses of Congress, the national and global perspective completely moots the insular one inherent in WCV’s complaint that I-732 “can’t ensure that we will achieve the pollution reductions that are required in state law.” Whether or not the particular carbon tax on the Nov. 8 state ballot lets Washington meet those targets is dwarfed by the potential of the carbon tax template to go viral nationally and internationally.

But perhaps the most telltale confusion in that first WCV bullet point is the charge that I-732 “allows all polluters to pay to continue to pollute instead of reducing emissions.” As the saying goes, that’s a feature of carbon-taxing, or indeed any carbon pricing system, not a bug.

Here’s the thing, or two things: first, in our society, polluters get to choose to pollute; what I-732 does is to finally make polluters pay to do so; second, polluters’ choices — and whether we like it or not, “polluters” means all of us who press a gas pedal or turn on a switch as well as the corporate bosses atop the system that limits our agency to choose — are affected by prices.

Every day, in Washington state alone, millions of decisions are made, some almost microscopic (how fast to accelerate up that hill; whether to drive to the nearby mall or the distant one) and some momentous (Boeing’s design and material selections for future aircraft; how it powers its factories) that together determine energy demand and fuel choice and, thus, carbon emissions.

As much as we might wish otherwise, we as a society can’t take away the freedom to make those choices. We can constrain some choices through regulations such as CAFÉ and appliance standards and building codes and the like. We can expand choice through judicious planning. But regulations and planning by their nature can only address one facet of the many-sided carbon equation. A carbon tax, in contrast, operates on every side. (For more on this point, please download and read our 2014 comments to the Senate Finance Committee on energy subsidies vs. taxes.)

We could conjure Adam Smith’s “invisible hand” if the right wing hadn’t co-opted it to prop up its laissez-faire ideology. Let’s say instead that the tax on carbon pollution embodied by I-732 is neither an upending of our market system nor the “clever tinkering with market forces” alleged by an environmental-justice opponent, but an overdue and essential correction — a way to enable markets to finally tell the truth about what fossil-fuel burning is doing to our climate.

The final point to address here is Washington Conservation Voters’ objection to I-732’s allocation of the carbon tax revenues:

Unfortunately, [I-]732 devotes the revenue created by the initiative on tax cuts, instead of strategically reinvesting in clean energy to accelerate our transition away from fossil fuels and fund an equitable transition for workers and disadvantaged communities.

True again, but just a sliver of the whole truth. “Tax cuts” conjures giveaways to the wealthy, but I-732 is the opposite. It applies most of the carbon tax revenues to cutting the state sales tax, a regressive tax like no other that for decades has slammed Washington’s poorest households and communities. The percentage point cut in that tax, to 5.5% from the current 6.5%, allows the carbon tax to yield a net financial gain for most families in the bottom half. 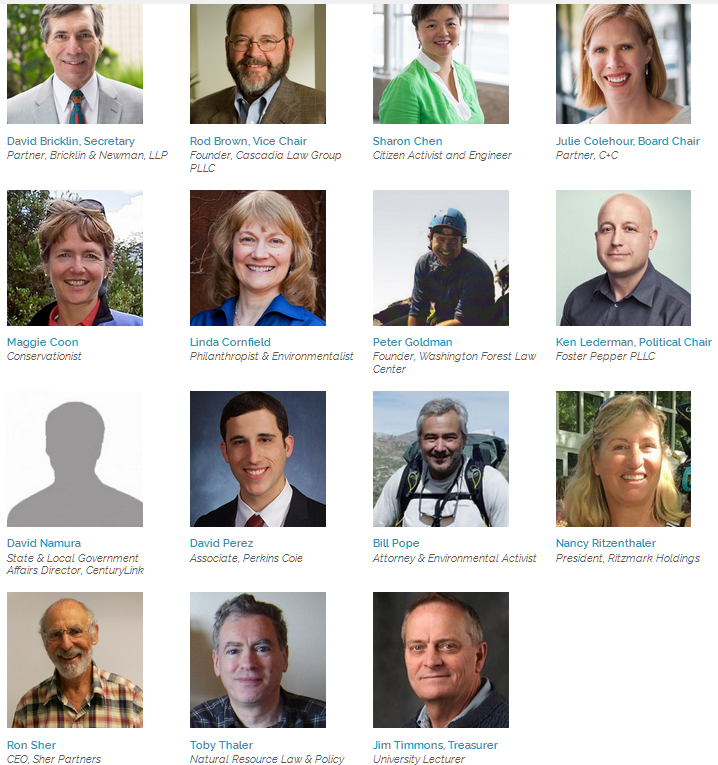 Do the trustees of Washington Conservation Voters fully grasp the game-changing potential of I-732?

Imagine if WCV had written the revenue-treatment provisions of I-732 to “reinvest [the carbon tax dollars] in clean energy” and “fund an equitable transition for workers and disadvantaged communities.” Without a doubt, the fossil fuel interests would have blasted the initiative for compounding the financial strains already faced by Washington low- and middle-income families . . . and they would have been right. Branded, correctly, as income-regressive, the carbon tax would have been consigned to a resounding defeat.

Making the carbon tax income-progressive, and not the shibboleth of “appealing to Republicans,” is the main reason Carbon Washington designed Initiative 732 to be revenue-neutral. But that decision has laid bare real fault lines in the environmental community, particularly on energy prices.

Green opponents of I-732 appear to believe that we — Washington, the United States, the world — can craft policies to quickly abandon carbon fuels without rapidly raising their market prices; or that the right energy-investment programs will offset the impacts of those price rises on vulnerable households and communities (a category that since the onset of the financial crisis has grown to encompass perhaps two-thirds of U.S. families).

Proponents believe, as I do, that rapidly raising the market prices of fossil fuels is essential, and that the only sure way to protect households and communities financially is to return the revenues in some progressive fashion. Nationally, that could be via the “dividend” approach propounded by Citizens Climate Lobby. That is probably not practicable for individual state carbon taxes, however, and I believe Carbon WA made the right call to swap out the revenue by cutting the sales tax.

In either case, the carbon reductions sacrificed by returning instead of investing revenue can be recouped by raising the carbon tax rate briskly year after year — a policy that can be enacted if and only if a clear majority of households are made better off or at least kept whole through revenue return.

In closing, let me affirm that I’m a man of the Left. Like Paul Goodman, whom I cited at the top, I’m suspicious of all powerful organizations, private or public. Nevertheless I firmly believe in the capacity of government to do good. If enough other citizens felt the same way, I might well be calling for the investment program that LCV says it wants. Heck, if a majority believed as I do, our country wouldn’t have one of the industrialized world’s most unequal distributions of income and wealth. Instead we would have a social system to support families that stood to lose more from rising fuel prices than they would gain from energy savings.

But we don’t live in that kind of society. We can fight for it, as I and many others in the climate movement do. But we can’t design climate policy for a society we don’t yet have. To turn away from the most potent climate policy instrument we have — one that is now, almost miraculously, being put before the voters of an entire state — would be sheer folly.

Click here for more on I-732, including links to the best and most recent press coverage.