That’s three automakers admitting they misrepresented their vehicles’ gas mileage to regulators and customers, just in the pages of the New York Times in the past month. 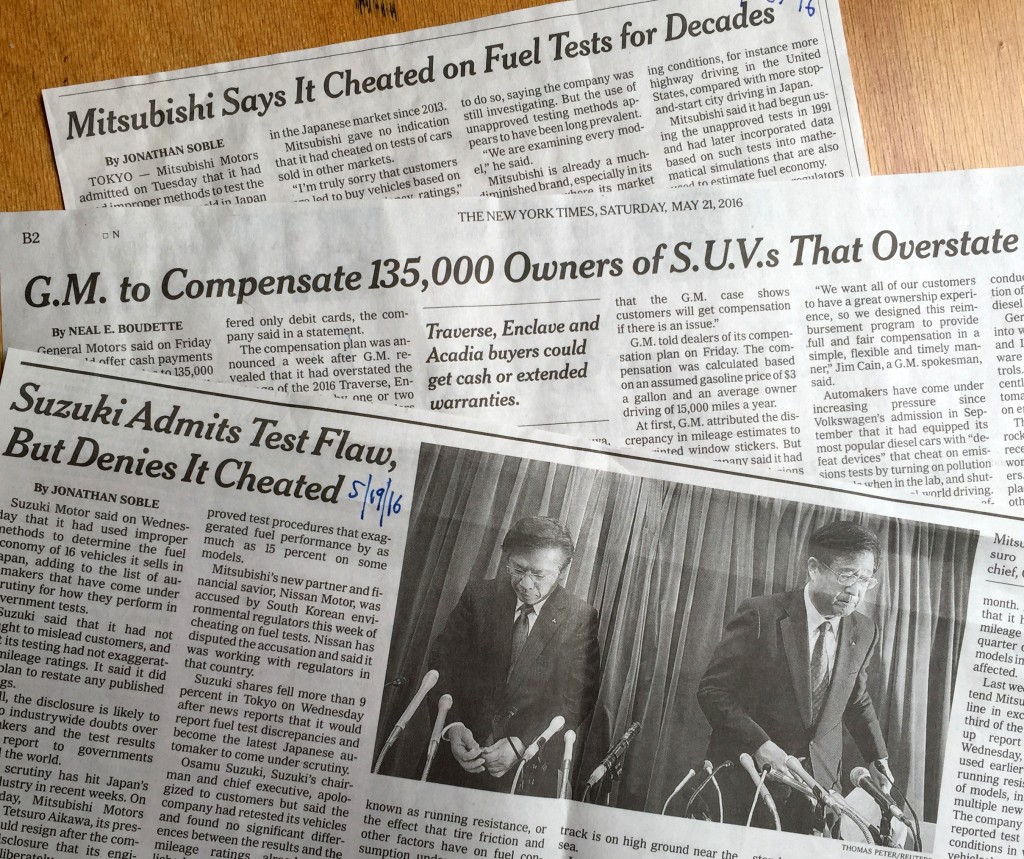 Scandalous: But not the heart of the problem.

But so far as climate is concerned, the real news on auto mileage standards came in an earlier Times story in March, “Automakers Likely to Ask For Leniency in Fuel Rule” (or, in the on-line version, Low Gas Prices Create a Detour on the Road to Greater Fuel Economy).

“With gas prices hovering around $2 a gallon, sales of low-mileage pickups and S.U.V.s have skyrocketed,” the Times noted. “Meanwhile, electric and hybrid models” — the more-efficient designs the automakers banked on selling to meet the government’s 54.5 mpg target for 2025 models — “are languishing in dealer showrooms.”

Now, with a crucial midterm review of federal fuel-economy rules to begin this summer, automakers are expected to seek adjustments to the government’s formula for increasing mileage and cutting greenhouse gas emissions. Proposed changes could include extending the time frame on mileage targets and expanding emissions credits to include enhancements for safety and autonomous driving. (emphasis added)

No, you’re not imagining things. The auto companies’ lobby group Alliance of Automobile Manufacturers has tipped off the Times that it will press the federal government to back off from the 54.5 mpg target. “Talks have already begun with the government in advance of the E.P.A.’s opening the midterm review in June,” longtime AAM spokeswoman Gloria Bergquist told the paper.

Not only that, to rationalize abandonment of the target the AAM is assembling a suite of policy offsets that have nothing to do with fuel efficiency (or greenhouse gas reductions). Automatic braking. Self-driving cars. Will credits for cupholders specially sized for refillable water bottles make it into the package?

None of this should come as a surprise. U.S. gas prices fell 27 percent in real terms last year, the steepest plunge since at least the Second World War, save for a fractionally bigger drop in 2009, the pit of the Great Recession. As The Times noted, and as we predicted at the start of the price slide (and any Econ 101 textbook would guarantee), Americans are rushing to again embrace gas-guzzlers, ensuring the 54.5 mpg target remains a pipe dream and locking in a huge uptick in carbon emissions for years.

A carbon tax, whether served straight up or offered as a cheap-oil tax, could have lessened the switch to SUVs and pickups by retaining some of drivers’ anticipatory price pain of filling up at the pump. More than that, though, taxes on gasoline would incentivize a host of ways to reduce gasoline consumption that far transcend mileage standards. Driving less tops the list, but there’s more, as we pointed out last September in one of our most quoted posts, What an Energy-Efficiency Hero Gets Wrong about Carbon Taxes:

A carbon tax will affect whether and how far and often to drive . . . which car to take on a family trip . . . how high an mpg rating to demand in the next lease or purchase . . . and, at the societal level, whether public transit investments “pencil out” and might be prioritized over wider highways, and whether hyper-efficient car designs pencil out in corporate boardrooms and venture-capital spreadsheets.

More broadly, as we wrote then, “a carbon tax effectively makes every action that reduces fossil fuel use less costly, by raising the rewards from using less fuel. Taxing carbon will open up multiple paths that will influence the literally billions of daily decisions that determine energy usage and, hence, carbon emissions.”

We have nothing against mpg standards. While they may not have been as impactful as appliance efficiency standards, which have driven “market transformations” in designs of refrigerators, air conditioners and such (and have also mitigated the “decision gap” when appliances need to be replaced overnight and there’s no time to study competing models), they have at least done something to lift actual miles per gallon of U.S. automobiles.

The hitch is that, like standards generally, mpg rules are a narrow-gauge solution to a broad-gauge problem. They address just one aspect (albeit an important one) of a multi-faceted issue: how will we reduce gasoline use quickly, massively and economically.

Not only that, as economist Valerie Karplus pointed out in a 2013 Times op-ed, The Case for a Higher Gasoline Tax, “[A] gas tax provides immediate, direct incentives for drivers to reduce gasoline use, while the efficiency standards must squeeze the reduction out of new vehicles only.” (emphasis added)

We know full well the difficulty of raising the federal gasoline tax that, appallingly, has been stuck at the same rate since 1993, let alone enacting a carbon tax. Still, it’s disconcerting to see “mpg hawks” like the Safe Climate Campaign react to the auto industry’s incipient campaign to water down the 2025 target by calling on the Obama Administration to “close loopholes” in the regs. Those loopholes are there by political design, and they’re not going to be closed by environmentalist lobbying.

This seems like a recipe for failure: doubling down on a rule that’s inherently complex and prone to gaming, that stretches over years if not decades, and that addresses only a piece of the problem.

We all want to diminish use of gasoline. Why not embrace the policy that attacks that usage at the root: a carbon tax.