[Our new page, The Inflation Reduction Act of 2022, has much more on the legislation spawned by the Manchin-Schumer deal — what it will and won’t do to emissions, what it means for climate policy, and whether it closes or opens future paths for carbon pricing. — Sept. 1, 2022] 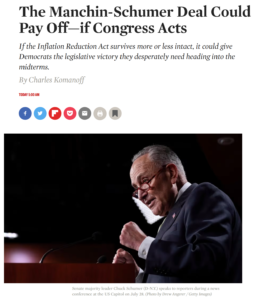 To access this post’s original version in “The Nation,” use link at top of text.

The Nation magazine this morning published my essay, The Manchin-Schumer Deal Could Pay Off—If Congress Acts. I’ve cross-posted it here to allow comments and add graphics for context.

While the deal assiduously, and regrettably, leaves intact the deep, intertwined roots of U.S. fossil fuel dependence, it’s imperative to support it — not just for its beneficial, albeit indirect, impacts on emissions, but because of its potential to materially improve both climate dynamics and political dynamics in the U.S.

Our Comments are open. Let us know what you think.

The Inflation Reduction Act of 2022 will knock out less than 10 percent of U.S. climate pollution by 2030, leaving the nation short of even its whittled-down goal of getting emissions 40 percent below the 2005 level.

Why, then, are many climate activists popping champagne corks? And why should progressives of every stripe do likewise? It’s simple. If the deal between Senate Majority Leader Chuck Schumer and West Virginia Senator Joe Manchin survives more or less intact, it will upend two deeply debilitating narratives: U.S. climate helplessness and Biden-Democratic Party haplessness.

The haplessness first: The legislation should help dispel the aura of fractious Democrats incapable of doing what we elect them to do: deliver big structural change. This turnabout could boost the Dems’ chances of retaining or even expanding control of Congress in the midterms, making possible not just other climate wins but also gains on voting and reproductive rights, economic justice, and the rest of the progressive agenda we hold dear.

The Inflation Reduction Act likewise marks a turning point, at least for the time being, on long-running, world-damaging U.S. climate helplessness. True, modeling by the Rhodium Group found that the legislation will only deliver a 7 to 9 percent carbon reduction relative to ongoing trends—far short of the massive cuts required for the United States to credibly claim global climate leadership. But by letting millions more Americans experience wind, solar, and energy efficiency—not as abstractions but as palpable engines of economic advancement—the bill opens paths to expansive climate gains going forward.

The omnibus legislation also burnishes green energy investments by packaging them with other popular but less threatening reforms such as affordable prescription drugs and higher taxes on big corporations. Not to mention the chef’s kiss of the bill’s name, the Inflation Reduction Act, signaling Democrats’ attentiveness to this year’s hot-button issue.

Admittedly, this is a lot to hang on a bill that doesn’t directly tackle the entrenched, intertwined systems that have long locked in Americans’ profligate carbon consumption: massively overbuilt roads, decrepit public transit, low-density zoning, anti-urban bias, rampant inequality, and artificially cheap fossil fuels. But, to borrow from Auden, such are our low, dishonest politics. No bill addressing even one of those matters was ever going to pass this Congress, with the modest exception of a fee on “excess” methane leaks from oil and gas wells and pipelines, starting in 2024.

Instead, we get three big, complementary though indirect ways to cut emissions: monetary rewards for wind, solar, and nuclear—yes, nuclear—generators that make electricity without burning fossil fuels; bigger tax credits to purchase electric automobiles and accelerate the demise of fossil cars and trucks; and tax breaks for US factories to manufacture those new wind turbines and solar arrays.

If much of that sounds technical, wait till you hear Rhodium explain that the Inflation Reduction Act will let clean-energy developers transfer their tax credits to third parties that “have tax liability and [thus] the ability to monetize the credits.” The 700-page bill abounds with just such tools to crack open long-standing bottlenecks impeding the shift to clean energy.

The legislation also swarms with fossil-fuel concessions, most notably a requirement that the Interior Department auction off more public lands and waters for oil drilling. The Center for Biological Diversity last week labeled that provision a “climate suicide pact … that will fan the flames of the climate disasters torching our country [and deliver] a slap in the face to the communities fighting to protect themselves from filthy fossil fuels.”

People complaining about the provision in the #InflationReductionAct that allows for more drilling on federal lands have a VERY different counterfactual than I do. It would almost be like me complaining there is no carbon tax in the bill…#ClimateCrisis #ClimateAction

Let’s also credit the Manchin-Schumer deal’s potential to leverage U.S. emission cuts by palliating our global climate disrepute, a point long made by Senator Edward J. Markey (D-MA), who along with Rep. Alexandria Ocasio-Cortez (D-NY) and the Sunrise Movement, is widely credited with elevating the Green New Deal into political discourse. “You can’t preach temperance from a bar stool,” Markey said in 2008, adding last week that “you can’t ask China, India, Brazil or other countries to cut emissions if we’re not doing it ourselves in a significant way.”

While we shouldn’t over-credit the immediate carbon reductions from the Inflation Reduction Act, it’s imperative to close ranks behind it, as MIT climate economist Christopher Knittel urged on Twitter last week: “People complaining about the provision in the Inflation Reduction Act that allows for more drilling on federal lands have a very different counterfactual than I do. It would almost be like me complaining there is no carbon tax in the bill.”

Knittel’s counterfactual, of course, was U.S. climate stasis. Mine was as well, along with Democratic Party squabbling. That may have changed last week. We must make the most of it.

Addendum: The Inflation Reduction Act includes a fee on “excess” methane emissions from oil and gas wells and pipelines of $900 per metric ton of emissions above new federal limits in 2024, increasing to $1,500 per metric ton in 2026. MIT economist Chris Knittel (quoted above) equates the $900 methane fee to $60 per metric ton of CO2, a level that would qualify as a fairly robust nose in the proverbial camel’s tent of carbon pricing.