The G.O.P. senators to target for a carbon tax

As I was writing this post, I saw on Twitter that not a single sitting Republican U.S. senator accepted an invitation to appear on Meet the Press today. Though that could mean many things, the refusal of the entire G.O.P. senate conference to be interviewed by the pre-eminent Sunday mainstream media talk show bodes poorly for productive policy and political dialogue going forward.

What makes Republican intransigence especially disheartening is that even if the Democrats manage to defy the odds and capture both seats in Georgia’s Jan. 5 U.S. Senate elections, giving them a one-vote majority by virtue of the vice-presidential tie-breaker, they may still need Republican votes to pass impactful climate legislation in the next Congress.

Those votes could offset a possible No vote by one of the Democrats’ own: Joe Manchin, a legislator best known for a 2010 campaign video in which he fired a bullet through a handbill promoting the Democrats’ carbon cap-and-trade  bill “because it’s bad for West Virginia.” The Mountaineer State is famously coal-dependent and pro-Trump. Only 30 percent of voters there chose Biden on Nov. 3, his lowest share in any state except Wyoming. And Manchin is up for re-election in 2022. 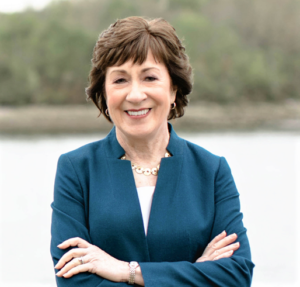 Like it or not, her state’s climate-energy-electoral profile and her own relative centrism make Maine’s Susan Collins the most likely Republican senator to consider meaningful climate measures such as a carbon tax. Photo courtesy Susan Collins for Senator.

Sen. Manchin may not be the only Democratic senator turning his back on climate legislation when Congress convenes in January. Arizona’s Kyrsten Sinema began her political career with the Green Party but has since tacked right. Her senatorial voting record last year was even more conservative than Manchin’s, according to GovTrack’s “Ideology Score.” Since she’s not up for re-election till 2024, she could decide that she would have time to recoup from a pro-climate vote.

Georgia aside, then, any climate bill worthy of the name may need Republican votes to clear the Senate. Is there any prospect of getting even a single G.O.P. senator to vote for, say, a revenue-neutral carbon tax like fee-and-dividend — a measure that wouldn’t expand government and thus might be considered “on brand” with traditional Republican principles, as we noted in a post here the day after the election?

Hard experience with the Republican conference over the past dozen years would suggest no. On the other hand, inexorably rising climate concern and the growing call for climate action point to at least a possibility that a few G.O.P. senators might see it in their interest to stand down Mitch McConnell and defect from his party’s deflect-and-deny strategy.

We’ve ranked the 52 Republican incumbent and incoming senators (that’s this month’s 50 G.O.P. winners plus Georgia’s Perdue and Loeffler) by their openness to climate legislation. We made six indices — two pegged to each state’s fossil fuel dependence, two reflecting its sensitivity to climate chaos, and two denoting senators’ individual insularity from pro-fossil-fuels political pressure. We developed 1-to-5 scales for all six criteria and scored the senators on each. The maximum possible score was 30, and the lowest was 5.

And the highest scorer is Susan Collins, whose upset victory on Nov. 3 will vault her to a fifth term. Our ranking system gives her 27 points: 5 (the maximum) for Maine’s low coal dependence and high use of renewables, for its independence from fossil fuel extraction and carbon-intensive Big Agriculture, for the state’s high (among states with Republican senators) vote share for Joe Biden, and for what we call distance from the far right (Collins’ 2019 GovTrack score was the most liberal among G.O.P. senators; plus a score of 3 for Maine’s climate vulnerability; and a 4 for what we term freedom from re-election worries — Collins has six years before her re-election comes ’round again. Although she’s 68, that’s not much more than the Republican senatorial average age of 63, giving Collins a relatively low “lame-duck likelihood” based on age-related retirement.

At the bottom of our scale, with scores of 10, are a couple of senators from primo American fossil fuel sacrifice zones: Kevin Cramer of North Dakota and John Barrasso of Wyoming. Both states place below-average in climate vulnerability, low in climate concern, high in coal burning and energy extraction generally, and frustratingly mediocre in deploying wind and solar. Moreover, both senators sport far-right voting records and are just in their 50s, making them good bets to stand for re-election when their terms end in 2024. (We won’t belabor the fact that ND and WY rank 47th and 50th in population, and that their combined population, just 1.34 million, is less than half of one percent of the total U.S. population of 330 million.)

Collins’ 27 score leads her conference by far, suggesting that carbon-tax and other pro-climate advocates should be targeting her heavily. If her state’s Democratic tilt, independence from coal and fuel extraction and Big Ag and relatively high deployment of renewables, along with her relative centrist leaning and six-year window before facing the voters again, won’t incline her toward supporting climate legislation, it’s hard to picture any other Republican senator going that way.

These six are next:

♦ Richard Burr (NC), 22 score, on account of NC’s high climate vulnerability (think Outer Banks), relatively high Biden vote and relative independence from fuel extraction and Big Ag, as well as Burr’s own distance from the extreme right. On the down side, he’s up for re-election in 2022. 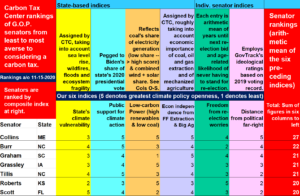 ♦ Lindsey Graham (SC), 21, due to the state’s low economic dependence on fuel extraction and Big Ag, his relative distance from the far right, and the fact that his seat is secure till 2026.

♦ Charles Grassley (IA), 21. Advocates who subscribe to Vox columnist Dave Roberts’ thesis that a robust renewables sector must precede climate legislation should target Grassley on account of his state’s huge wind industry (the country’s largest, percentage-wise). Plus, at age 87, his 2022 re-election campaign will probably be his last.

♦ Tom Tillis (NC), 21 — yep, the guy who just withstood a strong challenge from Democrat Cal Cunningham. Tillis’s profile is similar to that of fellow North Carolinian Richard Burr, with greater insulation from political opposition but a more right-wing voting record, according to GovTrack.

♦ Pat Roberts (KS), 20. Fresh off re-election, the 84-year-old Roberts should be immune to electoral pressure. His other big plus is Kansas’ vibrant wind sector, second only to that of Iowa in percentage terms.

♦ Rick Scott (FL), 20. The Sunshine state’s stark vulnerability to sea-level rise, along with its relatively high Biden vote share (48%) and its lack of fossil fuel production, give it high relative potential. (Fellow FL Senator Marco Rubio  scored less, 18, due to his pending 2022 re-election campaign.) Sadly, Florida’s failure to live up to its nickname where energy production is concerned holds back both senators’ likelihood of going pro-climate.

Notably absent from the top ranks is Utah Senator Mitt Romney, who earlier this year defied both President Trump and Leader McConnell by voting to convict the president of impeachment — the lone Republican to do so. Romney scored just 15, slightly below the sample average of 16. Utah ranks high in fuel extraction, and the state’s electricity sector is almost twice as coal-dependent as the average for other Republican senators — factors probably reflected in Romney’s outspoken support for the state’s oil, gas and coal industries. Further hurting Romney’s score was Utah’s low Biden share, 38%. The same dynamics along with a pending 2022 re-election campaign resulted in a middling 18 score for another ostensible Republican maverick, Alaska’s Lisa Murkowski.m, despite her state’s extreme vulnerability to climate damage.

You may have noticed that our rankings omit personal political preferences. Who knows, perhaps Romney’s courage on impeachment could signal willingness to break with McConnell on climate. Similarly, as we wrapped this post we got word that Indiana Sen. Mike Braun, who like Romney received an undistinguished 15 score, has volunteered to co-lead the U.S. delegation to the next U.N. COP (Coalition of the Parties) global climate meeting in Glasgow next November. Clearly, our rankings are far from all-inclusive, but hopefully they can be useful as a screening tool.

The major takeaway here is that in addition to working to elect Georgia Democrats Raphael Warnock and Jon Ossoff to the U.S. Senate, climate campaigners need to start focusing their resources to move Republican senators to act on climate in the new Congress.

This post was updated on Nov. 16 to include a sentence about Senator Murkowski.