From January into April, we, like many of you, marched and protested while trying to see a way forward for carbon taxes under a denialist U.S. regime.

We didn’t write this headline, but we agreed with it. The Left’s opposition to the WA carbon tax was a grievous mistake.

We spoke at gatherings across New York City. We published an article in The Nation magazine decrying left-green dogmatism that doomed the campaign in Washington state to enact the USA’s first carbon tax. We allied ourselves with the Climate Leadership Council’s audacious Republican-branded carbon tax proposal. We published a 120-page guide to state carbon tax prospects compiled by Yoram Bauman, the economist-activist who spearheaded the Washington referendum.

By then we were 100 days into a new administration whose cruelty and heedlessness were sickening. At a climate march in New Jersey, we called the complicit U.S. Republican Party “a racket to restore patriarchy, extractionism and white supremacy.” This truth grew even sharper a month later when Congressional Republicans cheered Trump’s repudiation of the Paris Climate Agreement. 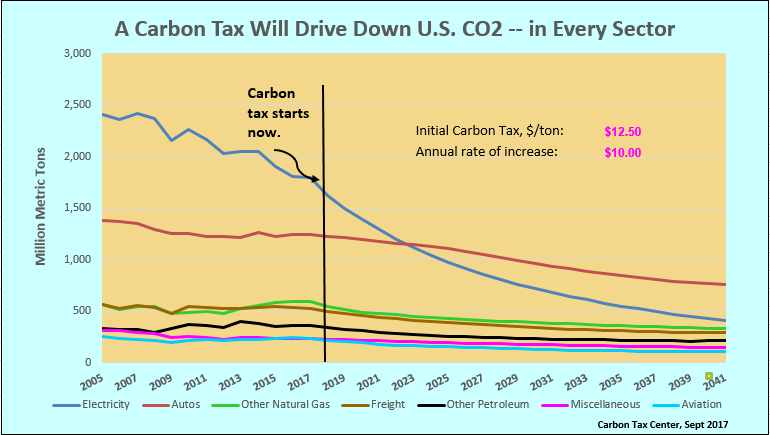 We kept working. We retooled CTC’s carbon tax spreadsheet model, incorporating the latest data, snazzing up the user interface and graphics, and for the first time apportioning refinery emissions among their “downstream” sectors — driving, freight and air travel (jet fuel). With this change and the ongoing shrinkage in coal-fired power generation, driving is gaining on electricity for the dubious distinction of most climate-damaging U.S. sector.

Meanwhile, a campaign for congestion pricing in New York City — fees charged to vehicles driven into and within gridlocked city centers — was gathering steam amid meltdowns in the city’s mass transit system, worsening traffic gridlock, and a void of political leadership. When Gotham’s SUV- and helicopter-riding mayor crowned himself leader of state-and-local-government resistance to the White House, we upbraided him on live radio, setting off a media frenzy that continues today. 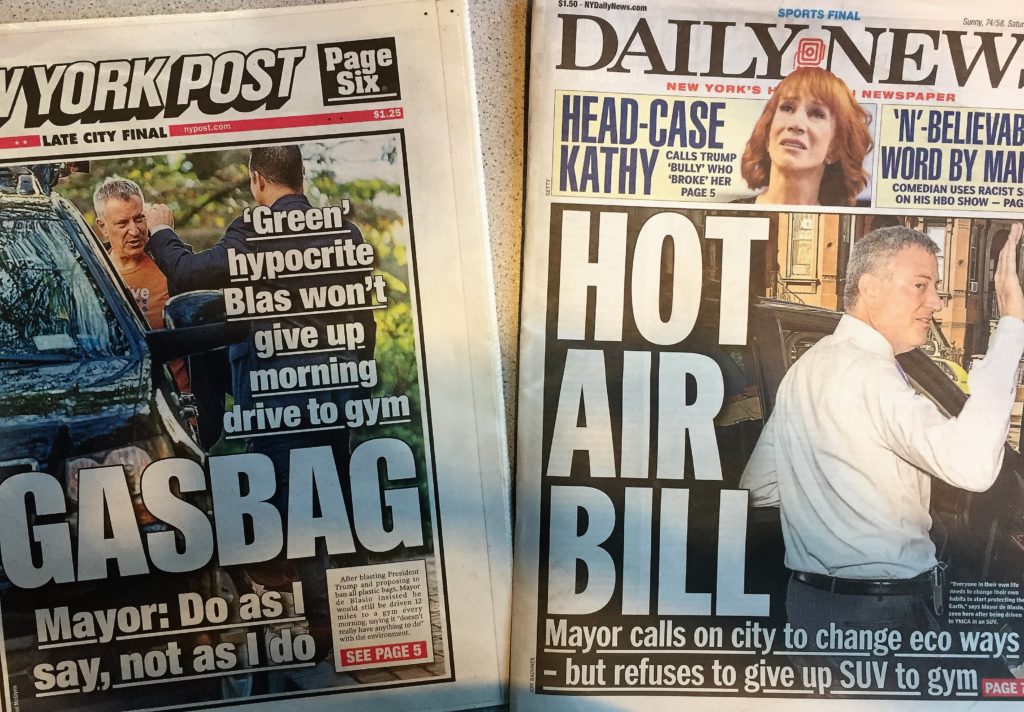 Our radio call-in touched off a roiling debate about the gap between public postures and personal acts.

But our criticism went beyond tabloid fodder; it pointed to the persistent gap between public postures and personal acts — a breach that carbon taxes could help repair.

Of course I said yes and plunged into massive updating and retooling of the model, which continues as I write this post. Details of the governor’s proposal are expected in a few days and the public debate and legislative donnybrook will almost certainly extend for several months. The fight is important, not just for the sustainability of New York and other global cities, as I argued last week on Streetsblog, but to finally establish in the USA the principle at the heart of carbon taxing: that the most surefire and equitable way to reduce pollution is to make polluters pay for it. [Addendum: The details can be found in my January Streetsblog post, The Fix NYC Congestion Pricing Plan Looks Solid — If Cuomo Aims High, which includes a link to the governor’s panel’s report.]

At the national level, the main event by far for carbon taxing this year is to bring an end to Republican climate denialism. This could mean routing the GOP in the midterms, or some other path to repudiating the party’s nearly monolithic rejection of science-based climate policy and its all-out embrace of fossil fuels. It may also require, in the states, dismantling the gerrymandering that, combined with Democrats’ “clustering” in urban precincts, entrenches Republicans’ control of Congress far beyond their share of Americans’ votes.

I’m sorry to say that the notion of a bipartisan federal carbon tax is barely on life-support, as we wrote here last week, decrying the passivity of the Climate Solutions Caucus — the Noah’s Ark-like conclave that we formerly touted as a possible incubator for a revenue-neutral carbon tax. Nevertheless, CTC will continue our technical support and policy advice to members of Citizens Climate Lobby and to the Climate Leadership Council. But we harbor no illusions that current Republican officeholders will provide political leadership or even partnership for meaningful carbon pricing legislation.

Excerpt from “Results” section of our “BTA” spreadsheet model. A key goal for early 2018: A congestion pricing win for NYC that establishes the “polluter pays” principle in the USA.

There’s a corollary: it may be time to rethink revenue-neutral carbon taxes. As much as we love carbon fee-and-dividend, with its powerful logic of linking rising carbon taxes to rising “green checks,” the revulsion against Trump and the G.O.P. could make it harder to sell progressives on programs with a seemingly middle-of-the-road cast. We also can’t dismiss arguments by Frank Ackerman and others that the “fat tail” of climate worst-cases demands national mobilization on a scale that only government action can generate.

Along with political action and some soul-searching, CTC is primed this year to

As we head into the new year, we thank you for your past support and your partnership. Contributions to support our work in 2108 (please use this link) will, as always, play a valuable role in keeping CTC edgy, timely and forward-focused.