Note: This post was updated in mid-May to reflect three additional signatories.

Republicans hold 241 seats in the U.S. House, a 47-vote margin over the Democrats’ 194. Earlier this week, 17 [now 20] of the GOP members issued a resolution “expressing the commitment of the House of Representatives to conservative environmental stewardship.”

The resolution doesn’t call for a carbon tax or any specific climate action; it doesn’t even mention “climate change,” though it does refer to “a changing climate.” In fact, the resolution is word-for-word identical to one issued eighteen months ago, in September 2015, also by 17 House Republicans, a group that included 10 of the signatories of the new resolution. (The other seven signers from 2015 are out of office — five declined to run, and two lost their seats to Democrats last November; none were “primaried” out. Of the seven new signers, four were newly elected to the House in 2016.)

Nevertheless, the resolution stands as a positive if halting step in the possible emergence of a critical mass of Republican officeholders to endorse and eventually vote for a carbon tax to combat climate change.

The resolution was by and for House Republicans only, a not unreasonable way to strike a small flame that would not be overshadowed by solid Democratic support for climate action. The 17 [now 20] signers hail almost evenly from Trump states and Clinton states, with four [now six] from New York, three each from Pennsylvania and Florida, and the other seven [now eight] from seven [now eight] other states. Only one represents a heartland state — Don Bacon, who just won election to the House from Nebraska — though two [now three] others are from the mountain West: Mark Amodei of Nevada and Mia Love of Utah [and also Mike Coffman of Colorado]. (See map.) 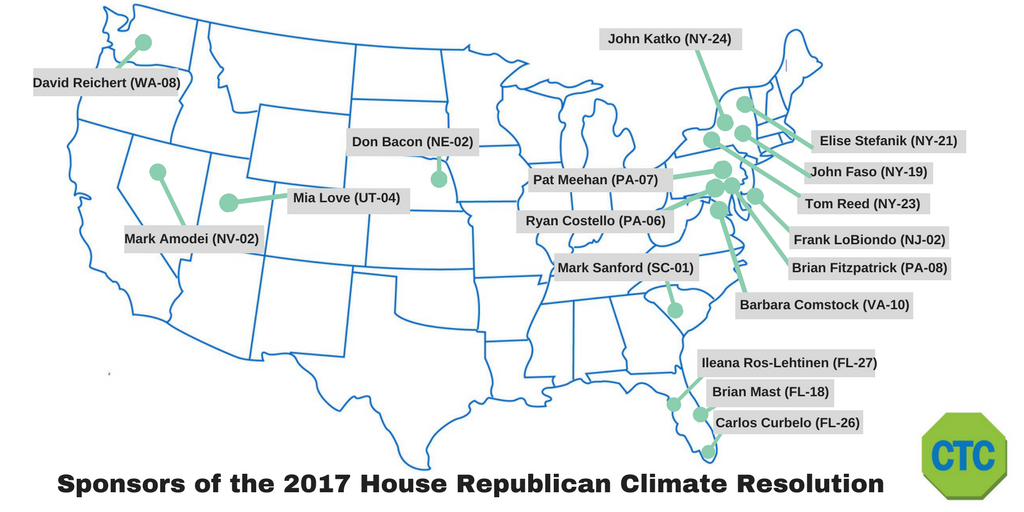 The resolution kicks off with this “whereas”:

[I]t is a conservative principle to protect, conserve, and be good stewards of our environment, responsibly plan for all market factors, and base our policy decisions in science and quantifiable facts on the ground. (emphases added)

Mild stuff since the time of Teddy Roosevelt — or the dawning of The Enlightenment — but relatively bold in the current era of Republican denial of science and dismissal of considerations that might interfere with short-term profit.

It goes on for eight more whereases, culminating (or petering out) with this resolution:

Resolved, That the House of Representatives commits to working constructively, using our tradition of American ingenuity, innovation, and exceptionalism, to create and support economically viable, and broadly supported private and public solutions to study and address the causes and effects of measured changes to our global and regional climates, including mitigation efforts and efforts to balance human activities that have been found to have an impact.

Weak tea, to be sure, but the point isn’t the resolution’s text but its existence. A small flag planted in an otherwise barren landscape. 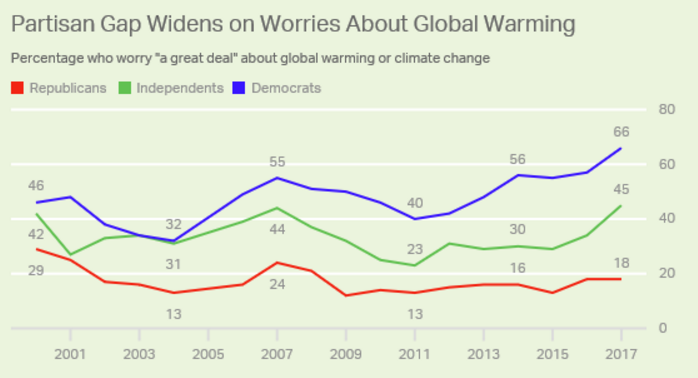 More Dems and Independents “are worrying a great deal about global warming,” reports Gallup. But not Republicans.

And barren it is, on the GOP side. The Gallup Organization this week released new poll data indicating that amidst an upsurge in Democrats and self-declared Independents who “worry a great deal about global warming,” the share of Republican worriers is stalled below 20 percent (see graph at left). That’s less than the rate a dozen years ago, before the Koch Brothers launched their insidious campaign to cloak denialism in pseudo-scientific respectability and ensure that GOP office-holders shield fossil fuel interests from regulation.

Note that our Polls page has more on the Gallup findings along with new and more encouraging data showing growing support for carbon taxes, from the National Survey on Energy and Environment (NSEE) from the University of Michigan and Muhlenberg College.

The graph makes clear that many Republican office-holders — unlike the distinguished party elders who last month unveiled the Climate Leadership Council‘s right-of-center, revenue-neutral fee-and-dividend proposal — are skating on thin (melting?) ice. Yet despite, or perhaps on account of, the “lite” nature of their climate resolution, they deserve our support. Here’s what you can do:

As you write your representative, you may want to consult FiveThirtyEight’s listing of your district’s Trump-vs.-Clinton vote from last November. It shows 21 districts where Clinton outpolled Trump but with a Republican member who hasn’t signed the resolution; they may be more amenable to suasion than other GOP representatives.

At least as important, join and support Citizens’ Climate Lobby, which since 2009 has been organizing to create political will for carbon taxes and which played a major role in both the 2015 and 2017 resolutions. A new CCL Web page on the Republican Climate Resolution makes it easy to take the first two steps outlined above.