As the New York Times reported last Friday, NY Gov. Andrew Cuomo and Entergy Corp. have reached an agreement to shut the twin reactors permanently in 2020 and 2021, respectively. Both units are in their fifth decade of operation. Though their electricity output has finally attained consistently high levels, their checkered record and proximity to New York City have made them an abiding source of concern of safe-energy activists as well as the state’s governor and attorney general. 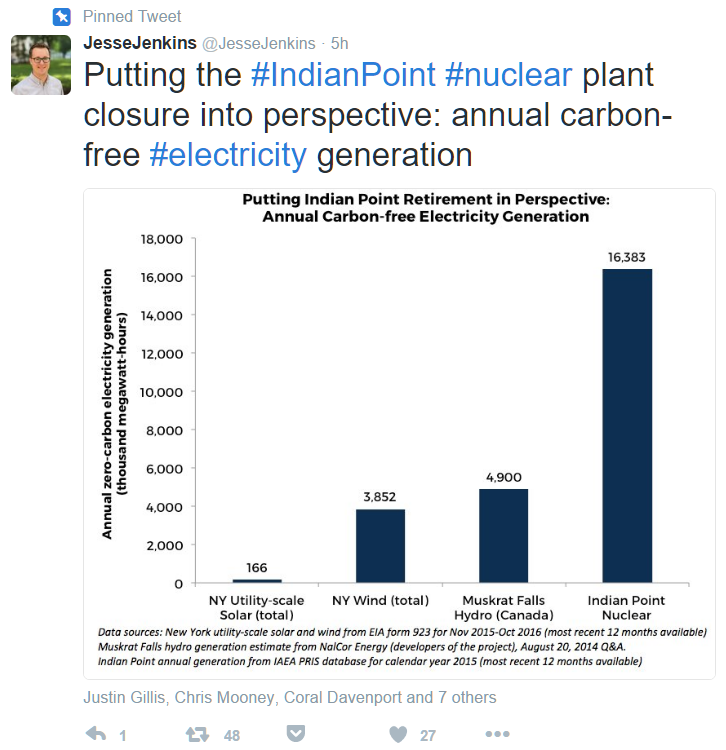 Replacing Indian Point with 100% carbon-free energy will be a tall order, according to one researcher. See graph below for a different take.

That production gave rise yesterday to the tweet shown at left from Jesse Jenkins, an electricity researcher with the Breakthrough Institute, purporting to “put the Indian Point plant closure into perspective” by showing that its electricity generation dwarfs that of other New York state sources of carbon-free energy.

Jenkins’ figures are probably right (I haven’t checked them, but he’s good with numbers). But they’re incomplete. They omit New York’s share of the largest U.S. source of carbon-free electricity in recent years: the electricity savings embodied in the divergence of total electricity usage from total economic activity.

We quantified that divergence in a new report last month, The Good News (blog summary version here). The bottom line, in numerical terms, is that in 2016 the U.S. was able to avoid generating a little over 500 TWh of electricity — almost one-eighth of the electricity it did produce — because electricity usage barely grew compared to 2005 consumption. (A TWh, one billion kWh, is a convenient metric.)

For reasons we spelled out in the report — structural shifts from energy-intensive heavy manufacturing to service industries; ratepayer-funded efficiency programs in tandem with government codes and standards for buildings, appliances and other end-use equipment; rapid penetration of digital technologies in energy management, product design and manufacturing, to name several — U.S. electricity generation in 2016 will likely be a mere 20 TWh above the 2005 level of 4,056 TWh, rather than in the 4,500-4,600 TWh range it would have reached if nationwide demand for power had grown after 2005 at the same relative rate to GDP that held during 1975-2005. 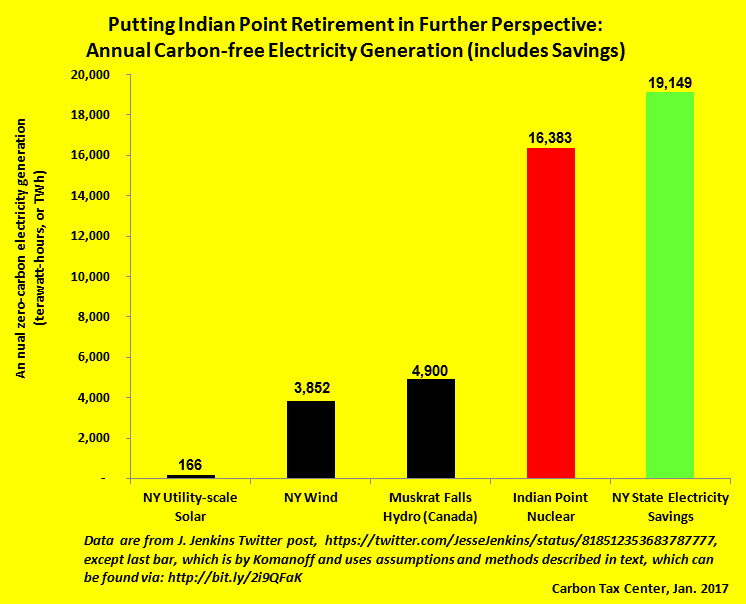 Almost by definition, those electricity savings are widely distributed and have taken place in every state. New York’s share may have been greater than the national rate, given its concentration of large office buildings and multifamily housing that are particularly ripe for money-saving energy-efficiency retrofits. For conservatism, we assign 3.8 percent of the 507 TWh of national avoided generation in 2016 to New York, based on its share of U.S. electricity usage in 2014, the most recent year with state data.

That works out to 19.1 TWh of electricity generation avoided statewide last year — all of it carbon-free — because the economy here, in tandem with the country as a whole, reduced its electricity-intensiveness between 2005 and 2016. (We use 2005 as a baseline because it’s both the benchmark year for many climate policy targets and the year in which U.S. electricity use began to markedly detach from economic output.) That figure surpasses by a wide margin the 16.4 TWh of annual electricity production that Jenkins ascribes to Indian Point, as our expanded chart shows.

It is true that electricity savings and nuclear power generation aren’t necessarily in conflict. Shutting Indian Point will require New York State policy, investment and consumers to push harder — much harder — on wind and solar as well as energy efficiency to achieve the carbon reductions that Indian Point now provides and would keep providing if the plant were re-licensed and continually refurbished to permit it to operate indefinitely.

But it is also true that Indian Point isn’t fully complementary with efficiency and renewables. The reactors’ inability to easily vary their output makes it harder for the state electric grid to integrate naturally variable wind turbines and solar power. Indian Point’s presence on the grid also depresses the prices offered for renewable electricity and energy savings alike. Conversely, the prospect of terminating both reactors several years from now will expand the horizons for carbon-free electric energy in New York state on both the supply and demand sides.

We hope this post adds useful context to Indian Point’s now-pending closing. It has been a major source of carbon-free electricity for New York state, but as of 2016 it’s no longer the pre-eminent one. Recognizing the contributions of energy efficiency in reducing greenhouse gas emissions will make it easier to fashion policies and organizing strategies that protect our climate, with or without nuclear power.