The arguments being marshaled by U.S. Senator from Alaska Lisa Murkowski to reject either a carbon pollution tax or a carbon emissions cap are timeworn and easy to deflect. Equating more energy with prosperity (and less energy with deprivation) is so far behind the curve, it even got upended in a Super Bowl commercial. (OK, the spot only aired in the Tri-State New York region, but it still had a major car company pushing fuel efficiency with the punchline, “The only way to pay less for gas is to pay for gas, less.”)

What’s harder to absorb is Murkowski’s embrace of that equation at the dawn of the 113th Congress, when enacting a U.S. carbon tax requires at least a modicum of Republican support. 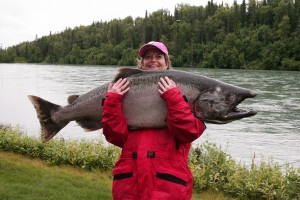 Murkowski, the ranking Republican on the Senate Energy Committee, has long been regarded as the Republican Senator most likely to someday go for a carbon tax. Back in 2007 she even co-sponsored a carbon cap-and-trade bill, in part because she understood that her state has been experiencing even more severe temperature upheavals than the other 49. Not to mention that the Alaska  Permanent Fund’s pro rata distribution of North Slope oil royalties to households has become a model for the fee-and-dividend carbon tax approach.

All of which makes it confounding that, according to press reports, Murkowski’s new energy “blueprint” brings down the hammer on both carbon price disincentives and limits on fossil fuels:

A carbon tax or a cap and trade proposal or something that is going to make energy more expensive is not going to help us . . . We like to be comfortable in our temperatures. We like to be able to move around. This is the mark of a successful and an economically healthy world. Where you have energy these are the prosperous areas.

Those remarks are not from Murkowski’s energy blueprint, called Energy 20/20, which isn’t Web-available yet. They’re direct quotes from the Senator, from a carefully reported article last weekend in the Anchorage Daily News. The same article helpfully reminded readers that “Murkowski herself co-sponsored an attempt in 2007 to impose a cap on carbon emissions, saying at the time that ‘the permafrost is melting, Arctic ice is disappearing and wildlife habitat is changing.’“

But that was then, as the saying goes. The article makes painfully clear that after years of tantalizing climate advocates, Murkowski has resolved to steer clear of carbon tax legislation — at least for now. Indeed, the headline, “Murkowski energy plan calls for more drilling, nothing to rein in greenhouse gases,” says that loud and clear. But here’s the topper:

If you’re sitting in Aniak [a town 300 miles west of Anchorage] and you get a press release from your senator saying the good news is we are going to address emissions, the bad news is you’re no longer going to be paying $6.99 a gallon for your fuel you’re going to be paying $10.99 then do you feel good about that? I can’t do that.

Where to begin? Well, to raise petroleum product prices by $4.00 a gallon, a carbon tax would need to be around $450 per ton of CO2. That’s literally off the charts: $450/ton is quadruple the 10th-year tax level in the Carbon Tax Center’s preferred bill, Rep. John Larson’s America’s Energy Security Trust Fund Act, and 10-20 times as high as taxes advocated by the Brookings Institution, among others.

And the upside of such a massive carbon tax ― of any carbon tax ― is the revenue it raises, which Murkowski’s “Aniak” sound-bite ignored. Carbon tax revenues could be dedicated to reducing the regressive and stifling payroll tax; or they could be “dividended” to Americans. In the latter scenario, Sen. Murkowski’s implied $450/ton carbon tax would yield annual dividend checks to every American household of $8,000, or six times the size of Alaska Permanent Fund checks.

Maybe that would play in Aniak after all.