Arising from the Senate’s Ashes?

And now, ve may begin?

Readers of a certain age, and a certain literary bent, will recognize the words of Alexander Portnoy’s psychiatrist, spoken at the close of Philip Roth’s transgressive 1969 novel, Portnoy’s Complaint.

After lo these many years, they popped into my head today as I read that Senate Democrats had finally thrown in the towel on an energy bill that would have included a partial cap-and-trade provision for limiting carbon emissions from power plants. The bill, written by Senators John Kerry and Joe Lieberman, was touted by Washington insiders and some major environmental groups as this year’s last hope for federal climate legislation. Yet it would have relied on carbon offsets and other dodges to postpone the day of reckoning with true, visible carbon emissions pricing — the cornerstone of meaningful climate policy.

Instead, reported the New York Times, Senate Democrats will pursue a limited bill aimed at increasing oversight of oil drilling and tightening energy efficiency standards — with no direct assault on climate-destabilizing CO2. (For a later Times story amplifying the first, click here.) 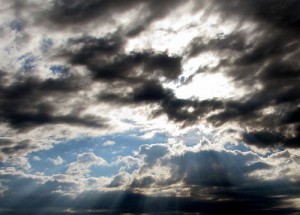 Yes, now, we may begin — “we” being Americans who care about climate, sustainability, and Earth — to unite around a climate approach that is effective, equitable and transparent enough to win the support of our fellow citizens and a Congressional majority.

I’m referring of course to the idea advanced by climatologist Jim Hansen as fee-and-dividend and by the Carbon Tax Center as a revenue-neutral carbon tax, by which fossil fuel extractors and importers pay the U.S. Treasury fees pegged to the carbon content of the coal, oil and gas they take from the ground or bring into U.S. ports, and the Treasury distributes the revenues to all Americans via equal monthly dividends (“green checks”), or by tax-shifting from regressive taxes such as payroll taxes.

The Senate’s antipathy to even the partial cap-and-trade proposed by Sen. Kerry will doubtless be spun as indicating that for the foreseeable future the well for climate legislation has been poisoned. The Carbon Tax Center says that the opposite may be true: with cap-and-trade out of the way at last, the political well can begin to be de-toxified so that the effective, equitable and transparent carbon fee-and-dividend can be seriously considered.

For this to happen, however, the Big Green groups like EDF and NRDC that for years have dominated climate discourse among environmentalists, and that convinced Congressional Democrats and the White House that the only way to “put a price on carbon” in America was via carbon cap-and-trade, will have to abandon that approach and allow others, and themselves, to try a fresh start.

It will be said that cap-and-trade failed because Fox News and other climate deniers branded it as “cap-and-tax” and, therefore, a carbon tax (or fee) cannot possibly succeed. And it is true that carbon cap-and-trade was looked to, years ago, as a way to build on the success of acid rain cap-and-trade, win over Republican free-marketers, and put a price on carbon without having to parade the dreaded t-a-x word before the public.

In the event, though, carbon cap-and-trade did none of these things.

Instead, Big Green’s pursuit of carbon cap-and-trade tethered the climate movement to complex financial instruments and branded us as servants of Wall Street elites. It opened the legislative floodgates to off-the-charts Beltway deal-making that rightly repulsed the public. Perhaps most importantly, the co-optation of climate advocacy by the cap-and-traders robbed us of the high moral ground we might have shared with abolitionists, suffragists, labor agitators and civil rights workers — true American heroes who fought to liberate our society of oppression and injustice.

If you’re in the climate movement, you recognize that fossil fuels’ assault on Earth’s climate is an ultimate form of oppression and injustice: of rich against poor, of the profligate against the frugal, of the present against the future. Ending this assault will require concerted action on many fronts; and it starts by internalizing the climate-damage costs of coal, oil and gas into their prices, so that the free ride for fossil fuels is ended and all of the alternatives, from energy efficiency, renewable energy and low-carbon fuels to conservation-based behavior and mindfulness toward energy consumption, may compete fairly and effectively.

Political action to accomplish this must be done in bright sunlight, not in Beltway shadows.

Cap-and-trade, let us hope, is dead. And now, we may begin!