With the ranking Republican on the Senate Energy & Natural Resources Committee now urging serious consideration of a revenue-neutral carbon tax, we carbon-tax advocates may want to re-examine our “framing,” even as we call upon cap-and-trade supporters to unite with us behind a carbon tax.

Let’s start with today’s news from GreenWire’s Darren Samuelsohn, which was picked up by The New York Times, that the ice jam blocking sound climate policy is finally beginning to break up: 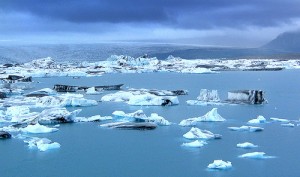 The Senate climate debate detoured from cap-and-trade legislation today as the Energy and Natural Resources Committee weighed alternatives like a carbon tax or even sector-specific limits on power plants.

“We need to dispense with the blind loyalty to cap and trade, or at least begin to question if it is warranted,” said Sen. Lisa Murkowski (R-Alaska). “We should objectively review the strengths and weaknesses of our policy options and develop a measure that protects both our energy and the environment.”

Murkowski, the committee’s ranking member and a co-sponsor last year with Democrats of a cap-and-trade bill, said Americans now associate the cap-and-trade concept as a tax that will raise prices on a range of consumer goods. That, she added, should prompt Congress to consider other less-expensive legislative approaches that take aim at reducing greenhouse gas emissions.

“We need to be honest about those costs, and ensure that the revenues associated with them are returned to the people who will bear the burden of compliance,” Murkowski said.

Here are my takeaways from Murkowski’s statements:

The import of Takeaway #3 is obvious: Committing to revenue-neutrality may not be enough to push a carbon tax through the political fog and past the fossil-fuel lobby. And rhetorically tying the carbon tax to a tax-shift and/or dividend may not suffice, either. Radical re-framing may be in order.

One possible approach is to push the tax dividend before the tax itself. That’s precisely what the Canadian environmental campaigner and writer Silver Donald Cameron did in an essay last month, Tax Those Carbon Gluttons:

LEMME TELL YOU about a carbon tax you’re gonna love… The fun starts with the government giving you maybe $2,000 as a carbon dividend.

You like it so far? Thought so. And the government gets the money by imposing a tax on everything that emits carbon dioxide into the air. The total amount raised by the carbon tax is the same amount that’s being distributed as a dividend. So it’s a wash. The government is no better off at the end of the day.

But you’re better off — if you’ve been frugal with energy, living in a snug house with solar hot water and wood heat, travelling on public transport, eating local food. You lose a bit of your dividend in taxes on gasoline and electricity and what-not — but you get to keep a good chunk of your carbon dividend. Let’s say you pay $400 more in taxes. That money just reduces your windfall dividend. The carbon tax still leaves you $1,600 ahead. How does that sound, sonny?

Fred’s a carbon glutton, so he’s definitely worse off. Sure, he also gets his $2,000 dividend — but he lives in a huge house in the outer suburbs, he doesn’t turn down his thermostat and he commutes 60 kilometres to work in a monstrous SUV. He has a penchant for exotic tropical fruit in midwinter and he flies a lot, so in the end he pays a lot of tax — which doesn’t exactly feel like a tax, but feels like higher prices. Let’s say Fred’s profligacy adds $3,600 to his overall tax bill. So the new taxes have eaten up all of his $2,000 dividend — and another $1,600 besides. That’s the $1,600 that ended up in your pocket, buddy.

Pollute if you want. Buy junk if you like. Emit as you choose. But it’s going to cost you — and the money captured from you goes directly to your clever neighbours. As time goes by and the whole society becomes more serious about slashing emissions, the taxes and the dividend go up. Stupidity becomes more and more expensive.

(Emphases added.  Cameron’s piece is no longer available at its original Nov. 22 posting at the Nova Scotian / Chronicle Herald, but by clicking here you can download it as an MS-Word doc.)

I happen to like Cameron’s messaging. A lot. I like that he puts the “dividend” up front. (By the way, the dividend could be a tax cut  as well as a check, though the check seems cleaner and clearer.) I like the libertarian, “Pollute if you want … But it’s going to cost you.” And I like the simplicity.

A carbon tax, even revenue-neutral, has always been a tough sell. The fact that cap-and-trade has been partly branded as a carbon tax might make the sell tougher still. But we may be breaking through the “That’s politically impossible” screen. With the right messaging, we could get there — into and through Congress — even faster.