What Can Replace Faltering Cap-and-Trade?

Is Waxman-Markey doomed? Revulsion at the special favors and sheer complexity built into the 1,400-page bill that squeaked through the House in June has been building nationwide this summer. Now, a Washington Post editorial signals the impending collapse of not just the bill but of cap-and-trade as the central mechanism for controlling U.S. greenhouse gas emissions.

The rancorous debate over health reform has given voice to considerable uneasiness among Americans. Many are worried about how a new system will be paid for in an economy that has unraveled, and they are anxious about a kudzu-like expansion of an already unwieldy bureaucracy. Given the herculean effort it will take to get President Obama’s vision of reform through Congress, we’re not convinced that the Senate will have the stomach to tackle cap-and-trade legislation this fall. The growing agitation within the chamber over the creation of another complex system to buy, sell and trade pollution credits only adds to our doubts. (emphasis added) 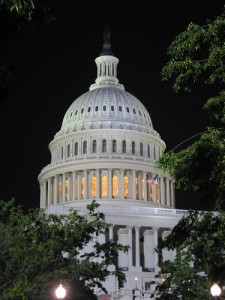 The House barely passed the American Clean Energy and Security Act (a.k.a. Waxman-Markey) in June. The 1,400-page bill has a potpourri of measures ranging from new efficiency and renewable energy standards to a cap-and-trade provision that gives away 85 percent of the pollution allowances to various interests. The Senate is proving to be a much tougher sell. Last week, four Democratic senators — Blanche Lincoln (Ark.), Ben Nelson (Neb.), Kent Conrad (N.D.) and Byron L. Dorgan (N.D.) — called on the leadership to strip cap-and-trade completely from the bill that Majority Leader Harry M. Reid (D-Nev.) hopes to start stitching together next month. This comes days after 10 moderate Democratic senators from coal and manufacturing states sent a letter to President Obama warning that they would not go along with any cap-and-trade regime that didn’t “maintain a level playing field for American manufacturing.” (emphasis added)

The fact that the epicenter of discontent is the coal-dependent “heartland” region indicates that Waxman-Markey has been more heavily attacked from the Right than the Left — as the Post itself signaled through its editorial title “Cap and Rage” and subtitle, “The fight over health-care reform could hobble climate-change legislation.” As we see it, the Big Green groups that steered Congress onto the  cap-and-trade path and also failed to insist on 100% permit auctioning and at least near-revenue neutrality share blame for the virulent attacks. Their stance helped turned the House bill into a perfect target for caricature as a “cap-and-tax” bill or “cap-and-trade tax” that would push hard-pressed American families, businesses and industries over the financial edge.

Dropping cap-and-trade from the Senate bill is considered a non-starter by Mr. Reid and environmental advocates for two reasons. First, a long-stated goal of congressional leaders and the president himself is to have emissions-limiting legislation passed and signed into law in time for international climate talks in Copenhagen in December. Second, there is no Plan B. The leadership has put all of its eggs in the cap-and-trade basket.

Fortunately, the Post hastened to remind Majority Leader Reid that there is indeed a Plan B:

Yet there are other options worthy of consideration. Yes, we’re talking about a carbon tax. It would be relatively simple to devise and easy to implement. It would require no new bureaucracy, and the revenue generated could be rebated to the taxpayer in any number of ways — through a payroll tax reduction, for instance. (emphasis added)

We know we are running counter to Washington’s tax-averse conventional wisdom. But we are not alone in our support of the carbon tax. There were three such bills in the House [including the Larson bill, which is more than 95% revenue-neutral and, with an upward-adjustable tax rate, is the most “cap-like” but without the politically toxic “trade” aspect]. One of the inventors of the cap-and-trade concept, Thomas Crocker, told the Wall Street Journal last week that he favors a carbon tax because he believes it’s easier to enforce.

If Congress fails to pass cap-and-trade legislation, it will rapidly approach a fork in the road in addressing global warming. Members can sit back while unelected bureaucrats at the Environmental Protection Agency follow through on their moves toward regulating greenhouse gas emissions as a pollutant under the Clean Air Act. Or they can entertain a carbon-based tax designed to reduce emissions and give the money back to taxpayers in an equitable manner. A decision on which path to take is bearing down upon us. Not only are the global warming dangers facing the planet reaching the tipping point, but there will also be no climate agreement in Copenhagen without strong leadership in words and deeds from the United States. As the Senate forges ahead, nothing should be off the table.

We agree, of course, that nothing should be off the table. The demise of Waxman-Markey won’t be pretty, but it should spur all who grasp the criticality of the climate crisis to unite behind the quickest, fairest and most effective means to reduce U.S. greenhouse gas emissions: a national, revenue-neutral carbon tax.