Has Krugman Fallen Prey to the Progressives' Blind Spot?

Influential liberal columnist (and Nobel economics laureate) Paul Krugman struck back today in his New York Times blog against critics of the Waxman-Markey bill who view cap-and-trade as an open invitation to massive new depredations by Wall Street. Michael Hoexter, Ph.D., a blogger and consultant on policy, energy efficiency and green marketing to businesses and government, and a previous contributor to this page, sent this reply, which we reprint, with Michael’s permission, in full. (The selections of bolded passages are ours. — Editors.)

I agree with you on many issues and also learn things from you as well. But sometimes you make purely political decisions that you vest with economic authority but not very careful thinking. 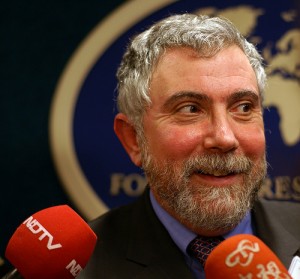 I think this post is an instance of economics being shaped by politics rather than being the (maybe) science that it attempts to be. I am personally full-time committed to action on climate change but you seem to be simply throwing your prestige behind an instrument that I believe is flawed, and not only because of an inchoate fear of speculation.

Let’s say we invented a market mechanism that made “health” a tradable commodity. Would you support that? For some reason cap and trade has gotten a pass from so-called progressives for too long.

Here are some problems:

For some reason, there is a blind spot with regard to cap and trade among so-called progressives … you seem to have fallen prey to it.