Rep. Doggett on Waxman-Markey: "I Cannot Support It."

Following is the statement delivered by Rep. Lloyd Doggett during today’s House floor debate on the Waxman-Markey “American Clean Energy and Security Act of 2009” (H.R. 2454, or “ACESA”). Rep. Doggett, a Democrat, has represented Texas’s 25th CD (central Texas, including Austin) since 1995, and is a senior member of the House Ways and Means Committee.

This energy bill’s fine print betrays its laudable purpose. The real cap is on the public interest and the trade is the billions from the public to polluters. It is too weak to greatly spur new technologies and green jobs.  An Administration analysis shows that doing nothing actually results in more new renewable electricity generation capacity than approving this bill. 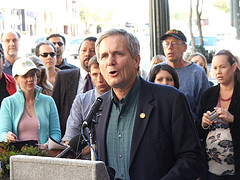 Vital authority for the EPA is stripped, but 2 billion additional tons of pollution are authorized every year, forever.  Residential-consumer protection incredibly is entrusted to the mercy of utility companies.  Exempting a hundred new coal plants and paying billions to Old King Coal leaves him, indeed, a very merry old soul.

This bill is 85% different from what President Obama proposed months ago.  No wonder his Budget Director called this type of bill ‘the largest corporate welfare program in the history of the United  States.’

Until greatly improved, until families share in the billions this bill grants powerful lobbies, I cannot support it.

(Click here to view a video of Rep. Doggett’s floor statement. Other CTC posts immediately prior to this present more detailed critiques of the Waxman-Markey bill.)