BC Voters Stand By Carbon Tax

Climate campaigners across North America awoke this morning and smelled the coffee: a resounding electoral victory in British Columbia.

As the British Columbia elections agency reported more than 60 percent of votes had been counted, the pro-business Liberals held a strong lead, with nearly 46 percent of votes compared to slightly more than 42 percent for the left-wing opposition New Democratic Party.

The Liberals and New Democrats, the province’s two main parties, had sparred during the campaign over issues including the economy, homelessness and several local scandals. But the environment — and especially the carbon tax — became the key election issue.

The tax, the first straight carbon tax in North America, was introduced by the government of British Columbia Premier Gordon Campbell in 2007 [ed. note: 2008] to help fight climate change. The tax is revenue neutral — the collected tax money is paid once a year to provincial residents.

The New Democrats, led by Carol James, fiercely opposed the carbon tax, arguing that it especially hurt rural residents. But the party’s opposition to the tax cost them the support of almost all environmental organizations, which sided with Campbell solely on the issue, while the nonpartisan Conservation Council launched a campaign telling voters to choose “anybody but James.”

The Green Party, which garnered slightly more than eight percent of total votes in early results, supported the carbon tax. But Green Party leader Jane Sterk was defeated in her home riding on Vancouver Island.

The election win gave Campbell a third term — a rare occurrence in the province — with his party holding a majority of British Columbia’s 85 legislature seats.

While elections are not referenda, the AFP report makes clear that the carbon tax stood front and center in the BC voting. After scanning hundreds of articles on the two-month campaign (and being interviewed for a handful, as well as appearing on Vancouver radio), our reading is that voters rewarded the Liberals for sticking to principle and standing up to the NDP’s withering attacks, as much as for the substance of the carbon tax itself. 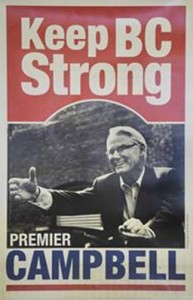 A U.S. carbon tax at that level would raise petrol prices by approximately 23 cents a gallon and national-average electricity prices by around 1.7 cents a kilowatt-hour. (Virtually all power generation in British Columbia is hydro-electric, so the carbon tax effectively exempts electricity.)

The BC tax is revenue-neutral, with revenues returned to taxpayers through personal income and business income tax cuts. The Feb. 19, 2008 BC Budget and Fiscal Plan spells out the tax’s rationale, impacts and mechanics, and is essential reading for any carbon tax advocate seeking to master communication tools for making a carbon tax palatable to the public.

In an e-mail to the Carbon Tax Center yesterday, American climatologist and climate campaigner James Hansen said, “The important thing is to get on the right policy track at the beginning — the policy must attack the fundamental problem, that dirty fossil fuels are the cheapest energy because they are not made to pay their costs to society.” Yes, carbon taxes must eventually reach high levels, but what matters now is that one major jurisdiction has gotten on the right policy track.

U.S. climate campaigners, mired in cap-and-trade murk, could learn from yesterdays’ election. At the very least, we owe a big debt of gratitude to BC Premier Gordon Campbell and his Liberal Party for political courage, and likewise to the voters of British Columbia for rewarding that bravery in the voting booth.