At Last, It Begins: Real, Substantive Debate on 2009 Climate Legislation

Before President-elect Obama’s cabinet is named — even before we know who the next Senators from Minnesota or Georgia will be — jockeying for position on 2009 climate legislation is well underway on Capitol Hill. Detailed intellectual cases and functioning coalitions are getting built now, not just for the idea that we need robust climate legislation fast – that’s already widely accepted and anticipated in Washington – but for which specific mechanisms will deliver the biggest, fastest impact on carbon emissions and the economy.

Significantly, these discussions aren’t all taking place behind closed doors, but in full public view, for example at a public Hill briefing December 9 with carbon tax supporters like NASA scientist James Hansen, economists Gilbert Metcalf and Robert Shapiro, Canadian public affairs expert James Hoggan, and Rep. John B. Larson (D-Conn., 1st district), who has just been elected chair of the House Democratic Caucus, and who introduced an early piece of carbon tax legislation into the House. The public can attend, along with Congressional members and staff — details here. 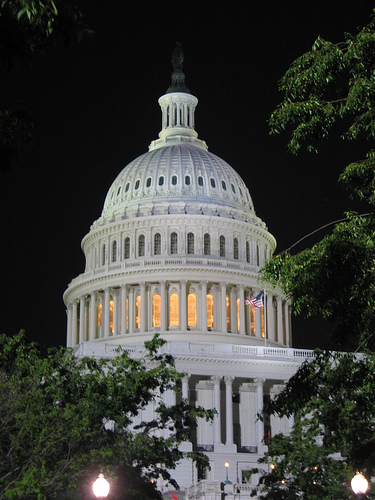 If introducing a new tax on carbon seems like a quixotic political battle in a time of historic economic and fiscal crisis, then you’re out of touch. The economic crisis has in fact given it a big boost, and in this crisis-ridden political environment, the carbon tax is an increasingly formidable competitor to cap-and-trade schemes.

The latter work by creating trillions of dollars’ worth of complex, tradeable instruments, and public faith in market gurus to make such trading efficient, or in government agencies to regulate them, is at an all-time low.

Critics point out lots of places to hide in the cumbersome trading scheme, witness 800-pages of special interest potlatches in the DOA Warner Lieberman bill, whereas a carbon tax is as inexorable as… taxes.

Crisis-driven volatility in oil prices has proven what advocates of gasoline taxes and energy taxes have said all along: price spikes may come and go, but if we don’t somehow tax wasteful use of carbon fuels, the highs will just put windfalls in the pockets of oil producers and do nothing for American interests, either for energy independence or for getting control of our emissions. A carbon tax would put an effective floor under the price of gas, help smooth volatility, cut into the windfall profits of producers during price spikes, and as prices fall off the highs, keep oil consumers from going, as President-elect Obama recently said, from shock back into trance.

Perhaps most appealing of all amid the economic crisis is the fact that a carbon tax could be kept revenue-neutral. That would allow us to pay as we go to curb emissions; and wouldn’t entail any huge government outlays or bureaucracies to get addicted to the revenue. Along with the increase in energy prices, carbon tax revenues would be big, but the money would be given right back to taxpayers, whether in the form of direct payments like Alaskans get for oil production, or in the form of a progressive tax cuts like cutting or eliminating payroll taxes, as progressives like Al Gore and even conservatives like T. Boone Pickens have proposed.

Payroll taxes are the biggest, most regressive taxes 80% of Americans pay, and a big drag on employment since they artificially raise hiring costs. Cutting them would both put money back into the pockets of middle-class and working-class families, and take the self-imposed brakes off job creation.

If you’re President-elect Obama and you’ve promised to create 2.5 million jobs by 2011, and to lower taxes on families making less than $250,000 a year, while finding the means for a meaningful economic stimulus and major reductions in carbon emissions, that has got to sound good.

If you’re a concerned citizen who has been waiting for years for the political static to clear, and some real, productive grappling with meaningful climate legislation to begin, this is your moment. You can weigh in, sign petitions, write letters to Congress, attend that Hill briefing, and generally be part of substantive, small-d democratic debate about serious climate legislation at the Price Carbon Campaign