Michael Bloomberg has made it official. “I am not — and will not be — a candidate for president,” New York City’s mayor said in an op-ed in today’s New York Times. 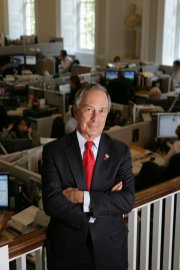 The article ends months of speculation that Bloomberg, a self-made billionaire who has emphasized a managerial, non-partisan approach to governing, would enter the race as an independent.

Bloomberg’s announcement robs the U.S. election campaign of an outspoken supporter of a national carbon tax. In a highly publicized speech to the U.S. Conference of Mayors last November, which we reported here, Bloomberg proclaimed his strong preference for a carbon tax over a carbon cap-and-trade scheme:

[A carbon tax is] like making one right turn instead of three left turns. You end up going in the same direction, but without going around in a circle first.

Bloomberg made similar remarks favoring carbon taxes over cap-and-trade at the UN Framework Conference on Climate Change in Bali in December.

For carbon tax advocates, the potential silver lining is that Bloomberg might now refocus on gaining city and state legislative approval for his plan to cut traffic and fund transit through a congestion fee to drive into Manhattan.

The conceptual and political parallels are strong between municipal congestion pricing and national carbon taxing. Both entail ending free exploitation of “the commons”; both demand a clear commitment to invest or return the revenues progressively; and both require mobilizing the multitude of citizens, who often don’t grasp that they stand to benefit, to clamor more loudly than the polluting minority whose entitlement is threatened. A congestion pricing win in New York City could undercut the notion
that a carbon tax is politically impossible.

While Nader has been roundly criticized and even ridiculed as a spoiler and perennial candidate (Nader was the Green Party candidate for president in 1996 and 2000, and he ran as an independent in 2004), his campaign platform includes unambiguous support for a carbon tax. “Adopt a carbon pollution tax” is Issue #6 on Nader’s campaign issues page, Twelve Issues That Matter for 2008.

As a non-profit organization, CTC can’t endorse candidates for elective office. We are non-partisan by temperament as well. We anticipate that Nader’s candidacy could become a double-edged sword with respect to carbon taxes, elevating carbon taxing’s visibility but also hurting its credibility among Americans who have grown disaffected with him.

What do you think?